Hi everyone.  I needed a masculine birthday card and I bought this set from Sheena Douglass called Concrete Jungle quite a while ago and I was encouraged to get on and use it after visiting Kathyk of Purple Princess Diaries, so thank you Kathy, and who had just bought it and made a great male card with it, but totally different to mine, which is what I love about stamping, and you can see it here.

I stupidly entered a card into the Penny Black and More Challenge which didn't have any stamping on it.  I had unusually for me used a digital image and watercoloured it, and it was several days before the penny dropped and I realised my error...definitely a senior moment..lol.  I let them know and I am assuming they will have deleted my other card, but anyway I said I would find another to put up instead, and this is it. 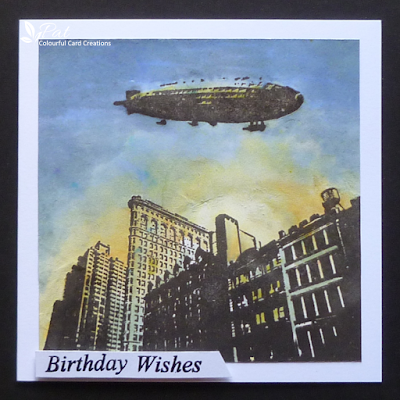 I found a piece of heavy weight cardstock and cut it to about 51/2" square.  I then stamped the two images using my Misti with Versafine Smokey Gray Ink and did this several times to get a good dark image, but I think it is still a little less harsh then black.  I then heat embossed it using Versamark Ink and WOW Clear Embossing Powder.

I masked out a sun/moon, as I have to say I haven't really made up my mind if it is daytime or nighttime, and the blue is not that dark, so it could be either.   I carefully sprinkled some Lemon and Orange around the buildings and using my waterbrush and also spritzing with water I made sure the powder was well dissolved.  I then used Ultramarine but instead of sprinkling them on to the paper I decided to use it with the waterbrush and paint it on as this is a very strong blue and again I wanted it to be well mixed.  I finished by adding some black to the blue to darken it and again painted it on to the scene.  I did also add some colour to the buildings and the airship to show where the sun/moonlight hits them.  I removed the mask and took the whiteness off  by adding some yellow to it.

I finished by adding it to this 6" square white card base and added a sentiment using Onyx Black and heat embossed it with some Clear EP.

Thank you for looking at the blog today and I'll see you again soon.

Penny Black and More August Challenge - I Spy (something beginning with 'B' - blue, buildings and birthday).
Sieze the Birthday - Anything Goes.

Grear card Pat and I love the sky effect

What an unusual scene Pat, but a brilliant one. Your sky inking is fabulous, a super card altogether, Kate x x

Just left another comment over at your Sunflower post, I think I also had a senior moment first time round.

This one is a real beauty, so much drama and such unusual images, I always think the beauty of masking suns/moons is that it can be totally down to interpretation. You have created a really misty hue to the sky and I think it's sunset with the sun dropping behing the buildings on a warm autumn evening.

Many thanks for joining us at Penny Black and More challenge.

Another fascinating process described so clearly! I love to read what techniques and products you have used to achieve your fascinating cards! Have a lovely day Pat my friend! Hazel xx

What a fun image and perfect for a masculine card! thank you for joining us at STB!

What a great scene Pauline! Love what you did with your stamp and the inking is brilliant! Good luck with the challenges!

Perfect scene for a guy card. This doesn't look 'easy' to color either,so I was intrigued by your methods. I agree, the gray or sepia colors are not so 'harsh' as the black is for some things. You did a superb job on the sky (it could be one of those days when it is getting ready to storm!) and I really like the glow you've achieved with the sun behind the buildings. You've just done splendidly with this one. TFS & Have a great weekend.

Sorry for my late commenting Pat as I’ve been looking after my grandchildren this week and didn’t get much time for blogging. It’s great to read how you progressed with this card and it’s turned out just perfect. I love the layout and the colours that you’ve used. I also love how you’ve used touches of yellow on the Air ship. For me, I think it looks like a setting sun as I that’s the sort of light quality that it produces. Great artwork as always Pat. Hugs, Sandra x

It happens, don't worry! This one is totally stunning with bold stamps!
Thank you for sharing at Penny Black and more.
I have a blogaversary challenge in my blog, welcome to join in with a new birthday card;-))m