Hi there everybody.  The Twofer Card Challenge is run by our lovely blogging friend Darnell and the theme this time is birds, and as the title suggests to enter you make two cards using the same stamps, stencils or dies but for two different occasions, and the bird central to both my cards is an image from a set by Chocolate Baroque called  Let Your Heart Sing, and here they both are. 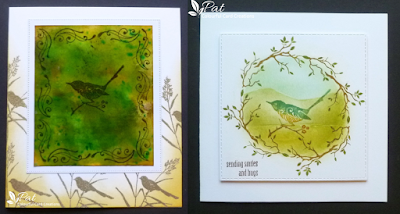 As I was running out of time and I wanted to get an entry in this time, the first card is one I made for the Chocolate Baroque TV shows last month but which hasn't been seen anywhere yet.  A bit of a cheat but OK I hope.

I started with a Brusho background in shades of green, Emerald and Leaf Green, and also some Yellow.  I darkened the edges with some Fossilized Amber and Spiced Marmalade Distress Inks.  I then stamped a border using a small flourish stamp from the set and added a small bird on a branch in the centre using Onyx Black Versafine Ink.  I decided to make it like a tile so I covered it with Versamark Ink and heat embossed using WOW Clear Gloss Embossing Powder.  I did this twice to build up the shine.  I finished the topper by matting it on to a Crealies Pierced Rectangle using white card.

I then embellished the card base using another of the bird images from the set along the bottom and up the sides using Versamark Ink and heat embossed with WOW Gold Metallic EP.  I then blended some Fossilized Amber DI over the top using a blending tool, and faded the colour out where the stamping ends.

I decided not to use a sentiment on the front as I didn't want to cover up the pretty gold embossing. 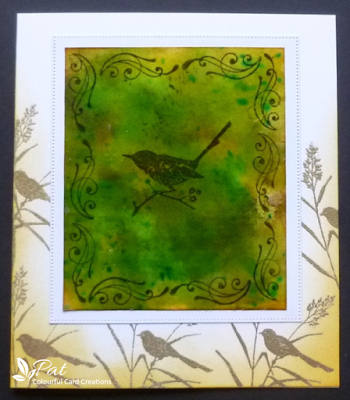 For my second card I decided to make a circle shape with some leaves from a set by Inkylicious called Mini Branches which I was lucky enough to win over at The Playground recently.  I started by cutting a mat using the largest square stitched die from a set by The Works.  I was going to use a Gina K Wreath Builder stencil which was also part of the prize, and using my stamp positioner, to place the leaves in a circle. 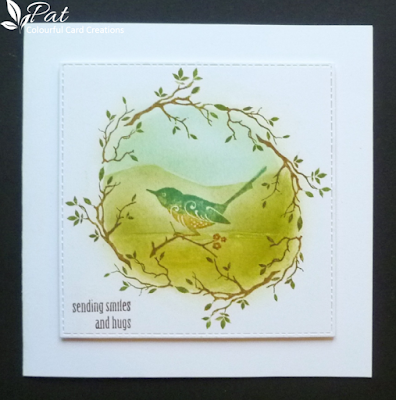 I wanted to use a slightly larger square than the 4" one the stencil allows, and although I managed to make it work on a piece of copy paper by overlapping the card on the stencil the same amount on either side of the cut out positioning places, when I came to do the same on the actual piece for some reason, probably user error..lol, it wasn't going well, so I decided to just place the stamps around by hand, still using my Misti, and it didn't finish up with the neatest circle ever but having spent quite a long time doing it I decided to go with it.   I used Brushed Corduroy Distress ink on the stems and Peeled Paint DI for the leaves.  I then placed the bird within the circle again using Brushed Corduroy for the bird's perch, and then Broken China and Fossilized Amber DI's on the bird itself, with some Aged Mahogany on the three little flowers.   I took the ink pads to the stamp inside the Misti for both the leaves and the bird, using one colour at a time to colour the image, stamping in between until I achieved the right result.  Rubbing the ink off the stamp from any areas I didn't want it was a bit fiddly but I do like the end result.

I then added the background brushing the ink on making sure to keep within the confines of the leafy circle which is easier with a stencil brush, again using Broken China and Peeled Paint DI's and using a mask cut from a piece of paper for the hills, and also a straight edge to use below.

I finished by adding the sentiment to the topper using Versamark Ink and heat embossing with WOW Copper Metallic Embossing Powder.  I then mounted it on to a piece of craft foam before adding it to a white 6" square card.

I really wanted to enter the challenge this time as I have missed the last couple of  months, and as I was running out of time using the one card which I had already made helped me along a bit, but this is a slight cheat and hope that Darnell thinks my shortcut is an acceptable one.

Thank you for visiting today and I'll be back soon.

2 lovely bird cards Pat, amazing how the same stamp can look so different depending on the design, love the embossed tile look on the 1st one and your stamped wreath on the 2nd one looks fantastic. I struggle to get 2 cards done in time too and have missed lots of these challenges, always glad when I can play along though, as it's fun and feels like a real achievement!

Pat, both cards are so pretty. Love your brusho background and also love the contrast with the CAS wreath and the bird.

If I understand correctly, you've not blogged your first card before, so it's not a cheat at all, Pat. I'm glad you had it done so you only had to make one before the deadline! Reading through the exhaustive steps you took making both cards really impresses me! They are both really outstanding and unique designs, beautifully thought out and put together! Thank you so much for playing in Twofer Card Challenge #12! Hugs, Darnell

Wonderful card, Pat. I love the rich colours of the Brusho on the first card and the wreath frame on your second card is just beautiful . xx

Hello Pat,your cards are fabulous, the colours on the first card are so rich, gorgeous greens and Golds. It's such a lovely image too. Second card is crisp and fresh looking,again a wonderful design, Kate x x

Oh they're lovely Pat... Your stenciling is stunning and I love the way you did the embossing along the bottom and up the sides of your first card... Fabulous designs!

The tile effect on the first card looks amazing. Wonderful stamping and heat embossing on the base card and such a beautiful card. Wonderful scene making on your second card and the rustic wreath looks great, along with the blending and stamping. Wonderful cards Pat....Both of them x.

I would not call that a cheat at all, Pat. Your first card was just waiting patiently for the second card to come along and play and, ohhhh, they're both so beautiful! Love the bird stamp with its swirly detail, and your backgrounds are mesmerizing. The twig frame looks just as it should, very natural. I'm SO glad to see these in our Twofer Birds challenge!

Your two bird cards are gorgeous, Pat. I love the scenes you have created with them. I wish I could see the shine from your clear embossing on the first card. I bet it looks amazing as a tile. The colours are so pretty and vibrant in the background. The second is so soft and delicate. Have always admired your scenes your create. Lovely idea to make it within the wreat. Great designs Thanks for playing along with us at Twofer Card Challenge! xx

Your both cards are a real artwork. I stayed with open mouth when reading all the steps you've done by creating those cards. I have to laugh by your sweet confession of cheating. :-)