Hi there.  Here is a recent birthday card for one of the chaps in our extended family, and I decided to use this Kingfisher from the A Little Bit Sketchy range by Sheena Douglass.  There is nothing so beautiful as seeing that flash of blue and orange as it swoops over the water, not that I have actually seen one myself, but I would love to one day.  This is its first inking and I have to admit I more or less followed the picture on the packing for the colours, but I'm quite pleased with the result. 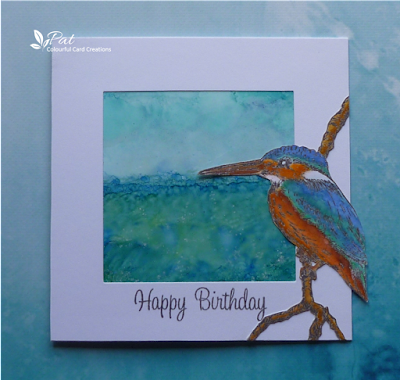 I started with the background which is alcohol inks on Yupo paper.  I wanted water and sky so I used a mixture of Stonewashed and Pool in the sky and more of these two plus Clover and Limeade for the water, and also some Blending Solution.  I also added a little white Posca pen smudged with the finger to look like spray on the water, but may be it looks too faint to see it.

I then stamped the Kingfisher on to a piece of white card using Versafine Smokey Gray ink heat embossed with WOW Clear Gloss Embossing Powder and coloured with my Distress Inks using Carved Pumpkin, Abandoned Coral, Blueprint Sketch, Lucky Clover and Brushed Corduroy applied with a waterbrush from ink put on to my glass mat.  I then fussy cut it out.  I thought I would add a little Wink of Stella on the wings and the head to add a bit of iridescence, not sure that it did a lot and it definitely doesn't show in the photo.

I decided to make a window for the background which I die cut from some more white card, cut using my square dies from The Works cut just a little bit smaller than my 6" square white base card and I added the sentiment using more of the Smokey Gray ink heat embossed with the Clear Gloss EP.  I fixed the alcohol ink background behind the aperture and fixed the bird to it too. 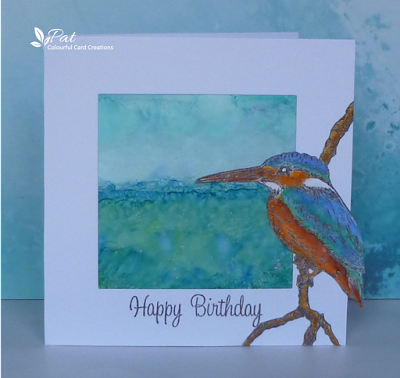 This was not trouble free as I forgot that the card had to fit into an envelope of just over 6" square.  There was a little swearing at this stage when I realised the bird was stuck not to be removed and it was sticking out over the edge too far, so after a little thought I decided to trim a bit of the left hand side of the aperture layer and also the side and bottom of the white card.  This made the card a bit smaller,  and also with a bit off the poor bird's tail feathers it just fits...what a palaver...lol.  I then adhered this piece to the white card.

Sorry for this rather lengthy discussion on how 'not' to make a card, but thank you for joining me today and I hope to see you again soon.

Pat, beautiful Kingfisher, so pretty against your AI background.

Love the background you created for your bright and beautiful Kingfisher Pat!

The background you made great and the Kingfisher fits perfectly. I love kingfishers, every year we can see them at our lake with some luck.

Beautiful card, Pat. You're right, there is nothing like seeing a Kingfisher in real life. Thanks so much for playing along at The Male Room Craft Challenge. Good Luck!

Absolutely gorgeous Pat, what wonderful colours and colouring. Love the inking of your background and the kingfisher is marvellous.
I often forget about having to get the card into an envelope, and have to make one especially to fit, Kate x x

Beautiful work, Pat! I too have never seen one of these birds, but they are gorgeous, and now I'll have to be on the lookout! Thanks for sharing this with us at the Simon Says Stamp Wednesday challenge!

Beautiful creation! Kingfisher is my favorite bird, glad to see it on your card.Thanks for playing along with us at The Male Room. Looking forward to seeing your creative projects in the future galleries again.

LOVE that Kingfisher ... and amazing AI background. Gorgeous card and worth the extra work to get it to fit the envelope. :) We've all done this! I bet your friend loved their card. Fantastic! xx

Oh wow - I love everything about this card! The Kingfisher is very majestic against that beautiful AI background:)

Amazing card and so very beautiful. Love the mix of the alcohol inks and how you did your glorious background.....so very effective. Gorgeous kingfisher and I have never seen one for real either. Sorry about the palaver of fitting the card into the envelope but I suspect the recipient loved it! One very special card x.

Beautiful card Pat, love your AI sea and the gorgeous kingfisher, I laughed, (sorry!) when I read about having to trim the card ços it was too big for the envelope, yep been there! It's a beauty, Cathy x

This is delightful Pat, loving your beautiful background too

That background is a pure delight!! I love it! It works well with your lovely kingfisher... Shame you had to trim the card - I've made that mistake many times!

I love your alcoholink background! The bird is coloured so well and is really beautiful against it. I recognise the problem of the card being too big ... ;)

A fabulous background Pat and I love your Kingfisher. I'm always making cards that are too big for the standard envelopes. I keep hearing about this Yupo paper and wondered if it was worth me buying some. I know lots of people use it with alcohol inks and I don't have any of those. I'm digressing now. Your card is beautiful and I love the colours x

Love your Kingfisher and a perfect background for him, fabulous card.
luv
Debby

great card Pat, love your wonderful looking bkg.
sure he will love it.
x Karen