Hi there.  Firstly I would just like to apologise to those people who I have not visited in a while as hubby and I had a trip to Holland and Belgium, specifically Amsterdam and Bruges, both places I have not been to before, and we had a great time.  We did also go to see all the windmills, nineteen of them I think, at Kinderdijk, and we aso went to Delft and Gouda, and the first weekend was spent in Rotterdam as hubby's choir were singing with a Dutch choir there.  The bicycle image is from Crafty Individuals which I have had for a while and haven't got around to using, and it reminded me of all the bikes you see in Holland, especially in Amsterdam outside the central station.  There were what seemed like thousands of them, and I thought that on returning in the evening actually finding your own bike amongst so many would be quite difficult.  Here's a photo my hubby took of them and I think you will see what I mean.  There were two more rows over to the left too which aren't visible in the photo. 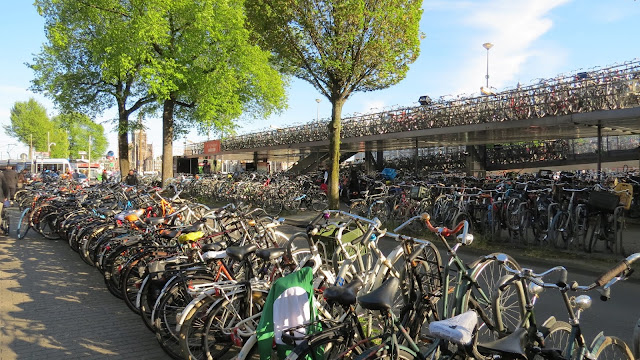 Well, now on to my cards today.  It is a while since I've managed to join in the fun over at the Twofer Challenge run by lovely Darnell, and was determined that this month I would definitely get an entry in.  The theme this time is Things With Wheels, and the idea is to use the same stamp, die or stencil on both cards but making two different designs for two different occasions.  One of mine is a birthday card and the other I think would be good for someone about to go travelling or facing some sort of personal challenge in their lives, anyway here are the two cards:

The first card also utilises the waste from a Sue Wilson Orange Blossom leaves die which had been lying around waiting for the opportunity to be used and this was it.  I stamped the bike using Peeled Paint Distress Ink using my Misti so that I could do several layers of ink to make sure I had a good strong image, and then added some Adirondack Sunshine yellow all over making it darker towards the centre.  I then began stencilling the leaves all around the edges using more Distress Inks and applying them using a blending tool, colours including Peeled Paint and Broken China and finished by watercolouring the flowers using Abandoned Coral, Fossilized Amber, Spiced Marmalade and Broken China added with a waterbrush.  I darkened the edges at the bottom by adding more layers of leaves using the Peeled Paint, and then decided to use the stencil to lift some colour so you can probably see their are some light ones too.  I added the topper to a piece of dark green card before adhering it to the white base card which started out as 7" x 5" but when I added the topper I cut it down a bit to better frame the image.  I am also entering this card in the CAS Stencil Challenge run by our friends Loll and Bonnie where the cue this time is Stencilling over a Coloured Background. 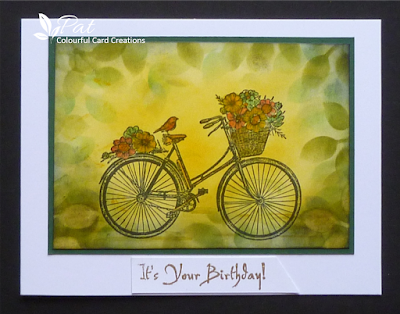 I am also entering this card into the Simon Says Monday Challenge - Use Stencils.


The second card was much quicker.  I  stamped a bike in each of the corners using Versafine Onyx Black Ink and then heat embossed with WOW Clear Gloss Embossing Powder.  I then added some Candied Apple Distress Ink around the edges and added the sentiment in the middle with the same red ink and then again heat embossed with the Clear Gloss EP.  To finish I added this to a 7" x 5" white card. 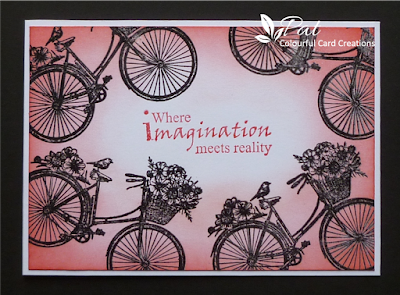 Both challenges are open for another day so have just made it in time.  Thank you for visiting today and I'll see you again soon. 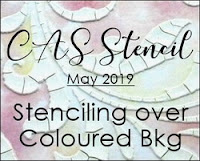 it's been a few year since I've been to Holland but do recognize the pics :)
Great bicycle imgages and love that stencilled background.

Fabulous bike cards Pat! Love the first one with the beautiful sponged background and the leafy border stenciled over top. Gorgeous! Your second card is more whimsical and would make a great encouragement card. Thanks for sharing with us at CAS Stencil and Twofer Card Challenges! xx

Your holiday sounds wonderful, Pat! Thank you for sharing that photo of the bikes in Holland! I must have sat a full five minutes just staring at it! They are all so close together and I don't see any locks, so does the contraption have a kind of automatic key ... it's all quite fascinating to me. They are so far ahead of us ecologically! Your photo was the perfect intro to your fabulous bicycle designs! I think they are outstanding! That first one is so so dreamy looking and I love how simple and CASlicious the second one turned out. I'm always on the lookout for QACAS ideas! Thank you so much for playing in Twofer Card Challenge #16! Hugs, Darnell

What a wonderful trip and how fun that your DH was singing with a choir there! Two lovely bike cards Pat - pretty stenciling of the leaves framing your bike - thanks for sharing with us at CAS Stencil! xx

Two fabulous cards. Gorgeous leafy border on the first one, frames the bicycle perfectly. Thank you for playing along with the CAS Stencil challenge xx

Wow, I don't think I've ever seen as many bikes Pat! You've definitely picked the right stamp to use as it reflects your travels perfectly. Two fabulous cards and I especially like your first one as the background is beautiful and it frames the bike stamp beautifully x

Great photo of all those bikes! The people in the Netherlands use their bikes a lot! And your cards are beautiful! What a gorgoeus background for the first one and lovely colour for the second! Great design too.

I've never seen that many bikes in one place! I can just imagine how many more were still out cycling around. Nice! Your two bicycle cards are fantastic, Pat! Beautiful leafy border on the first with the glowing yellow background. Love your idea for stamping a border with the whole bike for the second card. It looks great and it's perfect for the sentiment. I'm glad you found time to play along at Twofer!

Great cards, Pat. I love how you created the background on the first one and the way you've stamped the bicycles on your second card is very effective. Thanks for sharing the photos of all the bicycles. It reminded me of when we visited my daughter, she had a three month placement in the Netherlands when she was at University. She bought second-hand bike for about £10 when she arrived and sold it for the same amount just before she left. Apparently no one would bother stealing an old bike, so it was pretty safe leaving it with all the other bikes. xx

Two great wheels cards Pat, love the stenciled leafy background for the first and gorgeous fading pink for the second.

Glad you had such a wonderful time away and thank you for sharing the photo of those bikes....x Both cards are fabulous and particularly love how you did the first one, so creative and unique x.