Hi all.  Here is another masculine card as I needed a card for a cousin's husband and so I decided to use this Sheena Douglass stamp called Just Chilling which I have used only once before.  Last time I did it just as a silhouette, but this time I decided to use my Misti stamp positioner and ink up the stamp in different colours to make the scene. although I did do the sea and sky with a waterbrush.   Here is the last occasion I used it, for hubby's birthday actually nearly two years ago, and dreadful that I haven't used it since...shame on me! 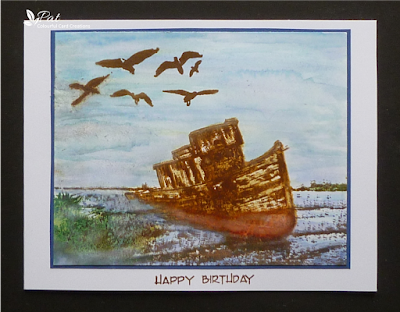 I stamped the boat, the ripples in the water and the distant horizon with Brushed Corduroy Distress Ink to start with by adding the ink to the stamp where I wanted it and then spritzed with a little water before stamping.  I then added a little Candied Apple DI to the bottom of the boat, and Lucky Clover and Pine Needles DI's to the greenery on the left, all spritzed with a little water before stamping.  I then added the birds using Versafine Vintage Sepia and then coloured the water using Adirondack Stonewashed and Blueprint Sketch DI.  For the sky I again used some Stonewashed but added some bits of Mermaid Lagoon but sparingly as it is quite bright.  I applied the inks using a waterbrush.

I then layered it on to some blue card and stamped the sentiment again using the Vintage Sepia ink and then added it to a 7" x 5" white base card.

This technique is a bit fiddly and if the ink strays where you don't want it I wipe it away using some kitchen towel.  I think to firm up the outlines of the boat I did stamp again using the Brushed Corduroy but this time without spritzing.   I think the jury's out as to whether this looks better than the last time, and one of the birds got smudged a bit, but I had spent quite a lot of time on it and needed to get the card posted so I decided it looked good enough to send, and just hope he likes it.

Thank you for visiting today and I'll see you again soon. 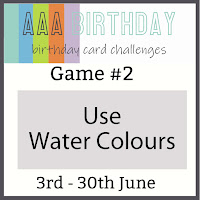 So pretty Pat, I love that scene with the boat :)

Wonderful card Pat, using the misti has created lots of depth in the colours, and what a fabulous stamp, I'm sure the recipient will love his card, Cathy x

A great scene Pat.
DI can be unpredictable - sometimes you get the impression you want sometimes you have to keep going until it looks right! I think this looks terrific and am sure it was well received! x

It's just beautiful Pat, had a look at the last card you made with it and it's beautiful too, and they both look so different. I love how you have given the scene a watercolour look and used terrific colours too, love it, Kate x

Super card Pat. Love the water colour effect you have created. "The smudged bird" (your words not mine :)) adds to the whole effect. Love it. Hugs Flo x

I'm sure he will love it, Pat! You always do such amazing coloring with your stamps to create your scenes! As for two years having gone by since you last used it ... sigh, I know how that feels!! Hugs, Darnell

Beautiful card Pat. Your cousin's hubby is going to love this. That image is so amazing and I love how you've coloured it. Great work with the watercoloured background. I don't see any smudged bird ... looks perfect to me. xx

Such beautiful water colouring on your background, really evocative! Thanks for playing at AAA Birthday, hope to see you join in with future challenges too.

What a lovely and atmospheric card from you Pat, I love it!

Top job, have a terrific weekend

This so reminds me of my recent trip to Cornwall... It's wonderful Pat!

I really like both versions Pat and this one is so artsy and your colouring looks fabulous. Loving the watery look to your fabulous card x

Thanks for your recent kind comments, much appreciated. This is a great image for a male card and it looks fine although I do know that spritzing stamps with water can be quite unpredictable but you do get a loose watercolour effect which is a change from a crisp clean stamped image. Love experimenting!!

Fabulous card, love how you have water coloured it! Thanks for playing at AAA Birthday, hope to see you join in with future challenges too! hugs XoX

I missed this wonderful card of yours, had a busy week last week.
But I am here now :) You created a beautiful and somewhat mystical scene!

There's some amazing watercoloring on this card, Pat. Thank you so much for playing along with us at AAA Birthday.

I missed this card when you posted it, as I was on holiday. It's a beautiful card, such a lovely, tranquil scene and your painted sky and sea are amazing. I'm sure you cousin's husband was thrilled to receive it. xx

This is such a lovely card Pat. The sky and water both look so realistic. It might have been fiddly but definitely worth it. I love my stamping press for making cards like this one. It's a superb card. Wishing you a very happy weekend. Crafty hugs x

Fabulous card, I love the watercolour effect. Thanks for joining in our 'Masculine' challenge over at Crafty Calendar.
Hugs
Bev x