A lot of Birds!

Hi there.  As the title suggests these are both bird inspired cards, and both made for my Hubby whose birthday it is today.  We have just come back from a week's holiday in North Wales and the day we left was our anniversary, so I decided to show both cards here at once.  The birthday card was made with another of the freebie stamps from the Craft Stamper magazine set which has featured on a couple of cards recently.  I must admit to being in a bit of a rush as we were going away and had naturally been busy with that and the cards needed to be fairly straight forward. 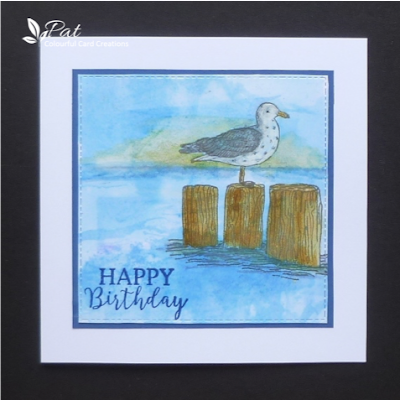 The background was made with a couple of blue Distress inks, Mermaid Lagoon and Blueprint Sketch.  I used an old plastic card, both the edge and flat to swipe the watery ink across the card in a fairly random fashion and is a very quick way of getting a background, and the inks blended together nicely.  I then stamped the images using Versafine Smokey Gray ink, first the wooden pier then the seagull on the top, and coloured with more Distress Inks using a waterbrush, including Brushed Corduroy on the wood and some Peeled Paint into the water for shadows, and Hickory Smoke on the seagull's wings.  I added some white gel pen to the face and breast feathers and then painted in a horizon line and the distant hills for background interest using the same colours.  I finished by adding the sentiment using Versafine Majestic Blue ink and die cut with a stitched square die from The Works and backed with some dark blue card before adding it to a 6" square white base card.


The anniversary card was made using a set of Flamingos by Sheena Douglass using the foliage and the sentiment too. 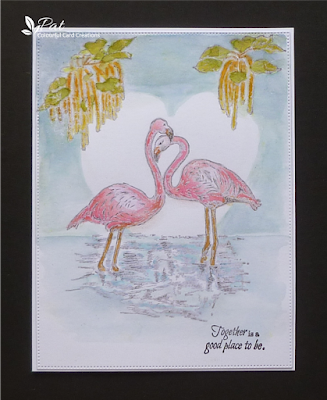 I stamped the main image and foliage using Hickory Smoke DI and then heat embossed with Clear Embossing Powder.  I coloured using Distress Inks Brushed Corduroy, Fossilised Amber, Peeled Paint, Mermaid Lagoon, Stormy Sky, Picked Raspberry and Adirondack Pink Sherbet.  I then die cut it using a Crealies set of Pierced Rectangles and added the foliage at the top and agained coloured with DI's.  I decided to add the sky with the heart shape behind the birds obviously keeping the inside of the heart white, and finished by adding a sentiment using Versafine Onyx Black Ink and heat embossed with Clear Embossing Powder.   I did add a bit of Black Micron Pen around some parts of the image as the Hickory Smoke looked a bit too pale and some of the lines were not very distinct.

I was happy with the seagull seascape, but wasn't too sure about the flamingos which didn't work quite as well as I hoped, and Hubby did like them both, but when pressed he did say the seascape was his favourite which I suspected would be the case.

Thanks for your visit today and I hope to see you again soon.

Two lovely cards for hubby. I love the flamingos. It our anniversary next month and
I’m at a total loss for what to do for this yrs card. Hugs Mrs A.

Fabulous cards for your DH Pat and the seascape card is particularly gorgeous with a fabulous background x. I think the two flamingos is perfect for an anniversary card....so very pretty and romantic. Hope you had a lovely time away and belated Happy Anniversary ? x

Two gorgeous cards Pat!! Your watercoloured scene are always exception. I love the way you've watercoloured the background and water for your seagul card. Looks fantastic. The image is so sweet and perfect with the mountains in the background. Lovely card for your hubby's birthday --- happy birthdy to him!!

Your flamingos are so sweet. I love the shading and micropen to add so much detail to the birds. The background is so creative with the heart shaped moon. Great work on both cards, Pat!! xx

Aww! Happy birthday to your hubby!! These cards are so lovely Pat... The colouring is wonderful and two amazing scenes!

A happy belated birthday for your hubby and also congratulations on your anniversary! You made him two wonderful cards, both have stunning backgrounds!

Happy Anniversary and Happy BD to your hubby, Pat! Your cards are both lovely. I appreciated your detailed process descriptions, esp for your seascape background. I always need tips on making scenery backgrounds. Love your beautiful results!!

Thank you so much for visiting my blog and leaving your kind comment on my 30 Cats in 30 Years mini-album. I love hearing about other people's cats....current and past!

In October I host a Cat Lovers Hop at my blog with tons of prizes and fun. You don't need to have cats to participate. I would be honored if you could join us this year, Oct. 21-26. Hope to see you then!!
<3 J