A Heart Full of Love

Hi everybody.  I have another anniversary card to show you today.  I decided to use this pretty floral heart from a fairly recent set of Chocolate Baroque stamps called A Heart Full of Love and ideal for this particular couple who have been married now for 51 years and I thought they would like this.  It turned out to be a little busier than I initially meant it to be but they have received it and said that they liked it so all good. 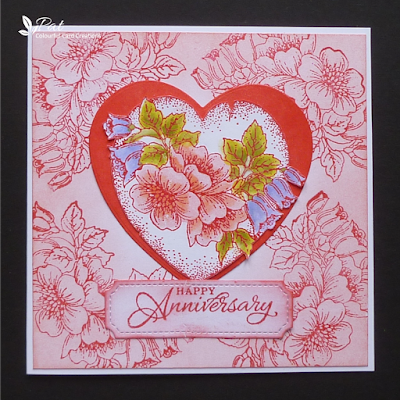 I started with the background using just the group of flowers which you can also use to decoupage the main heart.  I found a snippet of white card and inked it using Versafine Satin Red Ink and stamped it four times over the background.  I then used Spun Sugar Distress Ink with a blending tool and covered the background leaving it a little lighter in the centre though most of that is covered by the central heart.

I stamped the heart on to another  snippet of white card and coloured the flowers using a waterbrush using Spun Sugar,  Shaded Lilac, Crushed Olive and Peeled Paint Distress Inks.  I then cut it out and added it to a larger die cut heart and using a snippet of white card and an XCut set of dies and on which I blended some Candied Apple DI.  I finished by covering it with some Wink of Stella Pen to give it a bit of sparkle though it doesn't really show up in the photo.

I finished by layering it on to a 6" square white card and added the sentiment also stamped using the Red Satin Versafine Ink and die cut it with a tag die.

As a bit of an experiment I made the tag larger by die cutting a little over half the shape and then moved the die up the cut piece and cut the other end to match.  It was a bit fiddly but it worked quite well.  I would have been better stamping the sentiment first and then cutting the tag evenly around the stamping rather than trying to do it the other way round, so next time that's what I will do.   I inked around the edge using what I thought was a bit of Spun Sugar but it was a bit darker and I think it was the blending foam that had had the Candied Apple ink but didn't press too hard so actually it wasn't so very dark, although the photo has made it looks much darker than it does in real life which tends to make the background and sentiment merge rather.

Thanks for taking a look today and I hope you'll visit again soon.

Pixie's Crafty Workshop - No. 359 where we use up our snippets of card and paper etc.

51 years wow, I'm sure they loved the card. such a beautiful pop o f colour at the centre :)

A beautiful composition and such lovely blending of colours! I am sure the couple will love this handmade card!

Gorgeous card Pat, I love the background stamping and the colouring of floral heart is wonderful Pat, pleased the recipients liked it, Kate x

The background with the floral clusters looks like a patterned paper! The ink blending makes the stamped images rather subtle so it isn't that busy for me. A beautiful card for a special couple!!!

Absolutely lovely card Pat. The background is a work of art in itself. No woner the recipients love it!

Gorgeous and I really like how you've kept all of the colour within the heart itself. It's a beautiful card x

Your card is so pretty, Pat, I'm not surprised that the recipients loved it. xx