Hi there.  I have an entry for the Twofer Challenge No. 22 this month and am so pleased as the last two or three months I have just run out of time to get cards in but have managed it this time.  There is a twist to the challenge with it being nearly Christmas and as this is the last challenge until the new year Darnell has changed the rules and we can enter two different cards using the theme of Holiday Greenery but for the same occasion if we so wish, and mine are both Christmas cards.  I am woefully behind with mine so any chance to make them is a bonus.  The stamp set I used is by Impression Obsession and called Winter Trees. 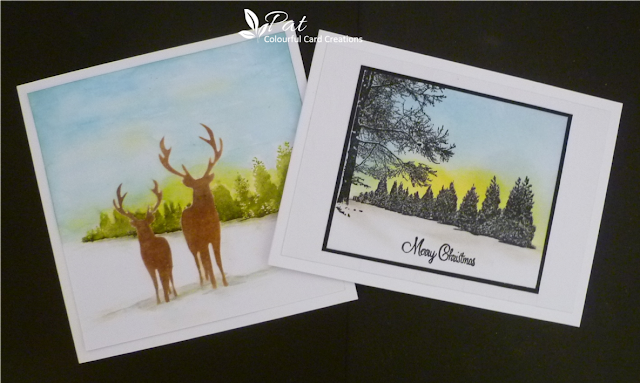 I started by stamping the image using Versafine Clair Nocturne ink and then heat embossed it using WOW Clear Gloss Embossing Powder.  I used Salty Ocean Distress Ink and also some Adirondack Sunshine Yellow for the setting sun, applied using my blending tool, and then I used some Pumice Stone on the snow for shadows.  I finished by heat embossing the sentiment using the same black ink, and added a white dry embossed stencil background using a Dutch Doobadoo tree stencil called Birch Trees and also matted the image on to black card to make it pop before adding it to a 7" x 5" white card. 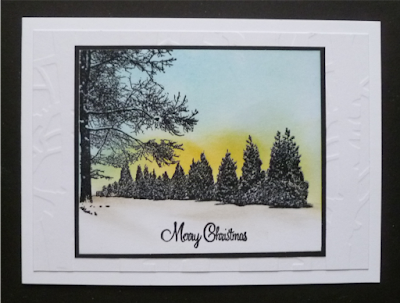 The second card uses just the line of trees, but I did ink parts of it again to lengthen the tree line.  I started by inking through a mini stencil from Creative Expressions called Stags using Vintage Sepia DI and then heat embossed them with WOW Clear Gloss EP.  I then stamped three of the trees at the right hand side using my Misti and Peeled Paint DI and then added the rest going over the embossed deer, and then added a few more of the most distant trees again to go well beyond the second deer.  I did stamp the bottom edge of the trees again each time with Forest Moss DI to darken and give some shadows.  I then sprayed some water on to the sky and added the blue using more Salty Ocean and Sunshine Yellow at the horizon but this time painting it with a waterbrush, but not sure that it looks like sun low in the sky on this one but it adds some interest I think.

I added some shading under the deer and to either side to look like tracks in the snow using Pumice Stone DI with a little of the blue added in.  I did take a fine black Micron pen and drew a face in on each of the deer, but as it has been glossily embossed it has marked it but very faintly so you get the faintest look of features.  I will be adding a Christmas sentiment on this one at a later date. 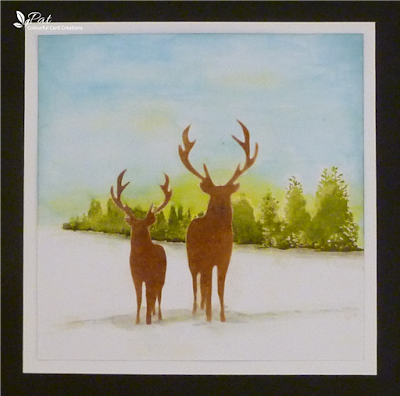 I've been eyeing that tree line stamp from IO, now that I've seenboth your cards it's a must. I especially love your stencilled stags are so majestic and the faint outline of their faces are perfect.

Two beautiful cards! I especially love the one with the deer, love the scene you created there!

Your little canvases always wow me, Pat! I think I say it every time, but you really should work on full-size canvases because you have such an eye for creating scenes! These two cards are really majestic. The deer look so real, your skies are always sensational, and I'm crazy for trees, especially at Christmas time! Thank you so much for playing in Twofer Card Challenge #22! Hugs, Darnell

WOW!! How beautiful Pat, I love the scenes on both your cards, and your sky inking is just fabulous, wonderful colours you've chosen too, and of course I love trees and the stags are fabulous, Kate x

What beautiful scenes you created Pat! I love them both!

Great scenes Pat, the sky inking is brilliant - and I really like those stencilled deer! (The wish list is now out of the door.......!)

What a fab "twofer", smashing design and colours too

Happy Friday to you

Your cards are always wonderful Pat but these two are real works of art. You have such an eye for colour and composition.

Thank you so much for your advice re stamping platforms - very much appreciated. Vicky x

The sun setting over the frosty winter scene is just gorgeous, Pat ... and those stately deer are so handsome in their snowy meadow ... the evergreen forest really pops against the snow! Thanks so much for playing along with us at Twofer! Anita :)

These deer are awesome, Pat! I love the colored trees behind them and the attention to detail! The silhouette trees also make a beautiful peaceful scene! Great work! (PS Think nothing of it. What's really scary is that I wouldn't have even noticed. xoxo)

Beautiful cards Pat! I just love the backgrounds you made...