I decided to enter two of Loll and Bonnie's CAS Challenges with this card as I have managed to cover both with the one card using an Xcut Sunflower Doily Die, and a little bird from Crafty Individuals which came with a few others as a freebie with a recent order.  I did try to find it on their site but couldn't.

The CAS Mix Up Challenge asks us to make a stencil from a die and include stamping, and a technique of our choice which in my case is heat embossing, and CAS Stencil Challenge  asks for foil, so I combined both these challenges and using the Sunflower Doily die I cut a stencil from a piece of thickish paper and used some Pinflair stencil glue.  I thought it might be strong enough to use with the foil, and having used it with a wet sponge as a temporary stencil adhesive literally to hold a stencil in placed I found that it was inclined to stick to and lift the surface of the paper so thought if I used it neat it would be strong enough to hold the foil.  I applied it through my stencil using a piece of blending foam but ommitted the scalloped edge, and then I left it to dry off before placing the gold foil over it and rubbed it down first with my fingers then with a bone folder and I would say it worked reasonably well. 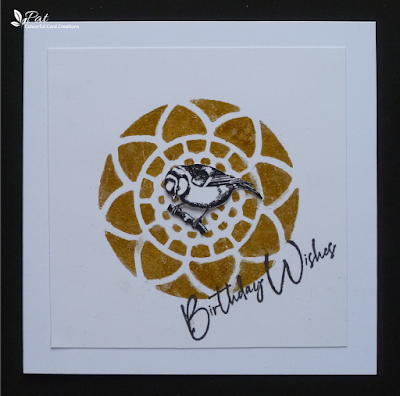 There were a few bits of foil where I didn't want them but I managed to remove these more or less with a Mono Sand Eraser.  I then stamped the little bird using Versafine Clair Nocturne ink and heat embossed it with WOW Clear Gloss Embossing Powder, and then fussy cut it out.  I also added a sentiment using the Nocturne ink before adding this to a 6" square white card.  Lastly I added the bird to the centre of the doily using Pinflair Glue Gel for a bit of dimension. 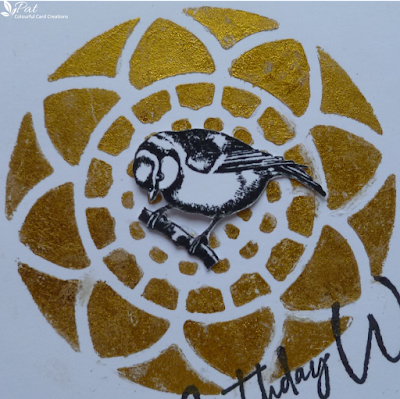 I am not totally convinced that the foil would stay put when sent in the post, but saying that I have rubbed it with my fingers and it seems to be OK, but the coverage could be better, as you can see in the close up there are a few bare bits, but I think I will investigate other ways of applying it which may be better. 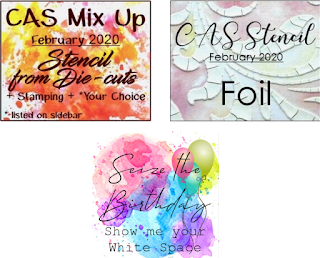 The foiling turned out wonderfully, Pat! There is almost always missing bits on my foiling attempts, so I've decided that's the way it's supposed to be! :) Trying to let go of my need for perfection (which rarely happens). :) The little bird on top is so sweet. Thanks for sharing with us at CAS Mix Up and CAS Stencil! xx

Pat, so beautiful the simplicity of the gold foiling is the perfect background for your little bird. Love the card :)

It's a great CAS creation Pat, I think lots of us struggle with this style but you have done a great job and your choice of colour perfect, many thanks for joining in with our dies and punches theme at Allsorts challenge.

It looks lovely Pat! I'm impressed with your technique and the clean lines you got with the stencil. Love the angled sentiment too... Thanks so much for playing along at CAS Mix Up! Enjoy your day

A great card Pat. The little birdie is really cute!
I think one of the nicer things about foiling is that you can get some little bits where the foil doesn't stick and this gives some interest to a block design and I like the look!
I tried foiling with Cosmic Shimmer Glue without success so opted back to double sided sticky sheets for cold foil - a bit fiddly but it did give some reasonable results!
Overall tho, hot foiling is easier in my view - not that I am an expert!!

A really great CAS card, like the way you have cut out the lovely little bird.
Thank you for joining our Animals,Birds and Butterflies challenge at Penny Black and More.

Great idea to use the glue and I think it looks fabulous with the foil. The stencil looks so pretty and draws your eyes into the cute little bird. Wonderful CAS card Pat x.

I don't think it is possible Pat to get a totally perfect piece of foiling..a bit of distressing just adds to the handmade beauty of your card. TFS and so pleased you joined us at CAS Stencil. Hugs..Nancy

Great foiling to me, since handmade pieces always have a unique detail. Love the elegance of the gold/black combo. Thanks for sharing this special card at CAS Mix Up!

Fab make and a great idea with the foiling too

Great card Pat, your foiling looks wonderful, mine is always a bit distressed too. Great fussycutting on the sweet little bird too. Thankyou for playing along at CAS Stencil and Seize the Birthday too, Cathy x

It sure looks fantastic to me, Pat! I didn't even attempt it, so I admire that you did! Your doily die was a fantastic idea for a stencil! I love the little bird you added and the placement of your sediment!! Hugs, Darnell

Great combination of challenges. The foiling looks fantastic and I love the bird:) Thanks for sharing with us at CAS Mix Up!

What a sweet bird in the center of your golden foil stenciling Pat! thanks for sharing with us at CAS Stencil!

Your foil is very pretty and a little distressed which makes it even better IMO! Love this sweet little bird and that pretty birthday sentiment! Thanks so much, Pat, for sharing this with us at CAS Mix Up!

Beautifully CAS .... love the doily design. Thank you for playing along with the CAS Mix Up challenge xx