Hi everybody.  Hubby celebrated his birthday recently and I won't say how many years, and I didn't put it on the card, but I will say that he has clocked up a few more than me..lol.  I saw a video recently by Gina K in which she masked to create boxes in which she placed her stamping and I liked the look of it so thought I would do something along these lines.  I decided to use a freebie set of stamps which came from a magazine a few months ago called The Great Outdoors and produced by Hunkydory.  I thought these would be good for masculine cards especially for those that like hiking and camping.  Hubby and I do enjoy walking and he is also a keen photographer so I included these things from the set.  We don't have a dog but the silhouette walker looked a bit lonely without it..lol. 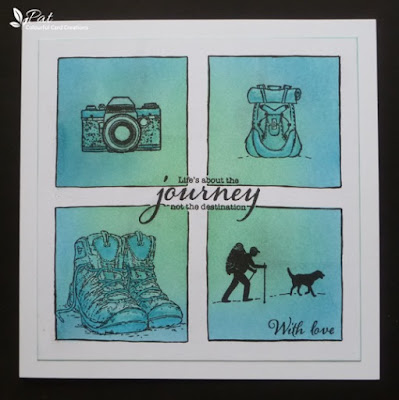 I decided to do a large 8" square card as I didn't have to post it, so made the piece of card to mat on the top about 1" smaller and found the centre point and cut the six strips for the masking about 1/2" wide using masking sheet as it sticks well without taking the surface of the card off when you remove it.  When I had placed it on the card I ink blended with Salty Ocean and Cracked Pistacio Distress Inks, keeping the Cracked Pistachio in the centre.  I then placed all the items using my Misti and stamped them using Versafine Clair Nocturne Ink.

I was so frustrated because at this point I managed to get a couple of bits of ink on to the edge of the two left hand boxes.  I tried the sand eraser which did fade it out but of course also took the ink off, so I put the masks back and reinked but the edge was not as clean as the rest so I decided to use my black micron pen and outline all the boxes. Against my better judgement I did it freehand and the result is a little rustic I think with some lines a bit thicker than others in places, but I had left it late to make the card and was not feeling like starting again.  For some reason the photo makes the boxes look quite out of shape, but in real life they don't look that bad.   I also grounded the walker and dog and the haversack, but wasn't sure about the camera so left it alone.  I then took some more Salty Ocean and a waterbrush and brushed some ink over the images to shade, and also water bleached to highlight, especially on the boots and camera.   I also ink blended a bit of the Cracked Pistachio around the edges so when glued down there is just the hint of colour.

Hubby did seem pleased and did say how different it was so a good result I think which made up for the earlier frustrations.  Thank you for taking a look today and I'll be back soon.

Allsorts Challenge - Week 580 I spy with my little eye something beginning with 'B' (blue, boots and birthday).
Craft Rocket Challenge - No. 72 For the Men/Boys.
Crafty Creations July Challenge - No. 411 Anything Goes.

Great masculine card Pat, your masked squares are a great way to highlight the images and I think the freehand outlines really suit the sketchy look of them. I can see why your hubby loved the card, Cathy x

Great birthday card for hubby, if you hadn't mentioned the oopsies I would never have known. The grounding of the 2 of your images is perfect, and wonderful outlining. You're so much braver than me :)

A great idea for a male card and interesting to read about your frustrations - always annoying but then we are always our own worst critics I think.

I think you did a wonderful job, Pat! The handdrawn lines are just right on this card with the inks! A good idea and a wonderful solution. Wonderful blending too! Our husbands birthdays are in the same month, we celebrate my Rob's coming Sunday :)

Lovely masculine card Pat and I'm sure your hubby loved it...love the layout and background colours

It's a lovely card and the dog does add just the right touch too. Thanks for sharing with us at Allsorts.

Hello Pat, what a super card, great images and design. It makes a brilliant male card especially too for an outdoor sort of guy, Kate x

You did a great job... I love the squares! I bet hubby did too! Love the colours and terrific design... Belated wishes to your hubby!

Your card is awesome!! And your hubby loved it, so there you go! You are too hard on yourself Pat. First, love the design and the colours you've ink blended in the squares --- gorgeous! Great images that capture some of hubby's favourite things. And the freehand outlining looks great. The best thing is that it's personalized and that makes it a keepsake. xx

Fabulous masculine card love the stamped images and inky squares.Thank you for joining us at Craft Rocket.
Carol DT x

Lovely masculine card for your hubby, I love the images. I hope he had a good birthday. xx

I am so glad you persevered with this wonderful masculine card. Teh images are perfect and I like how you edged the little boxes with the pen x.

great card.....love how you've depicted it in the four squares...
xx Karen