Card for a Sewer

Hi everyone.  I have a card today made with some freebie stamps which came with a magazine bought recently for me by hubby.  It was my birthday earlier this month and he surprised me on the day with a couple of magazines and one of them had sewing themed stamps, dies and an embossing folder, and perfect timing as a friend of ours had her birthday yesterday and she is a keen sewer/quilter so I made this card with some of them.  In case anyone is interested they came with Love Cardmaking Issue 7, and after checking it out it doesn't appear to be a current issue but he did buy it from a high street chain which sells magazines, so not sure why they were selling it there, and obviously I don't know if copies are still available. 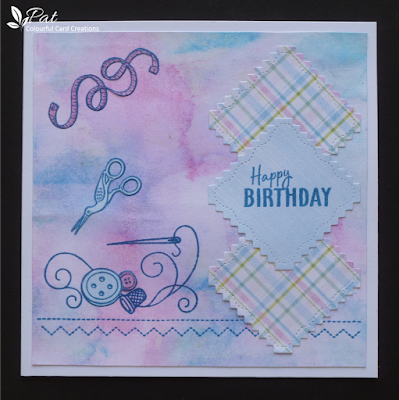 I started with a smooshed background using Salty Ocean and Picked Raspberry Distress Inks.  I then used the pretty pinked edge die which was one of the freebies, and cut three of the squares using some snippets of LOTV papers which I have from way back.  I stamped the images using Versafine Deep Lagoon Ink and also used it for the sentiment.  I extended the straight stitch/zig zag border which did join fairly well but luckily it is hidden under the bottom square.  I also used some more snippets from the LOTV paper pad to paper piece the tape measure, scissors and buttons which I thought made them stand out more.  I then added this to the white card and positioned the squares as you can see with the middle one as the sentiment plate.Thank you for dropping by today and I hope to see you again soon.

I missed my trip to the UK last year, I always brows the stamping magazine section for the freebee stamp sets :)
Awesome card and love the layout with the swatches paper fabric and your smooshed background

Great card for a person who is into sewing. Think I recognise some of these 'bits' and if I'm right this was a give away from some time ago - probably a couple of years even although of course there could be more than one magazine featuring sewing stamps and dies

Beautiful card, Pat. I love the soft pastel tones. I must admit, when I saw the title of your post on my reading list, I wondered what was on your card. I read ‘sewer’ as rhyming with ‘fewer’! 🤣 xx

Perfect card for someone who loves to sew Pat, love the smooshed background that sets the images off, thankyou for playing along at Watercooler Wednesday too, Cathy x

wow, what a beautiful watercolor background you made. Beautiful card! Have a nice day, greetings Ellen

A lovely background and card in pastel, Pat! Your crafty friend wil adore it, it has alle the elements she loves. Always so nice if someone makes a card for us with the focus on what we love!

It's a great birthday card for a Sewer, Pat! Love the pretty background and the cute pinked squares! And your paper piecing for the detailed small sewing tools looks awesome!

How thoughtful of your husband Pat x. What a unique and creative card for your sewer friend. I love all the attention to detail, the pretty background and the zig zag stamping and cutting x. One special card x. I too mis-read the blog title....so thank you for the friendly laugh too x.

That is about the only thing I miss of going into town and browsing the magazine racks. I only buy to take on holiday with me and I miss that too. Keep meaning to treat myself to a pair of the goose necked sissors. your card is super for a sewing alcoholic . My sister would appreciate this card. Great use of your snippets. hugs Mrs A.

Your background is sooooo pretty, I just want to touch it. Any sewer would love this card. Before you mentioned the name of the magazine, I was just certain I had these stamps. But I checked and I received sewing/craft stamps in an issue of Creative Stamping, plus the stamps were slightly different. It also had an embossing folder! Hmmmm. Mine were Crafters Companion. Anyway, that was quite thoughtful for a husband! Belated Birthday Greetings to you! xoxo

Belated birthday wishes Pat! What a fun card for your friend... I bet she will be very impressed! I love the little pieces of (paper) fabric.

Hello Pat, this is such a lovely card, I love your design and soft colours. The little patchwork squares are so pretty, just perfect for a sewing friend, Kate x

Such a pretty card Pat. Love the smooshed colours and those pretty pinked squares of pattern. I have a stack of those same sort of squares that I bought from a fabric store. They are called Candy Dots and I have used them a few times on my cards. I know you used patterned paper, but it really does look like fabric. Love it! xx

Fun and colourful card Pat. Thanks for joining us at WWW. Tristan DT.

Such a pretty card Pat and so perfect for someone who loves sewing. As Loll says, it really does look as if you used fabric!

Happy belated birthday Pat, I hope that it was a good one and how thoughtful of Hubby to pick up the magazines for you. Your card is lovely. It was a great idea to add the die cuts that look like tiny pieces of material, they look great x

Belated birthday wishes Pat! Your hubby is a gem! Love the card and I bet your friend did too. Really beautiful!