Hi everybody.  Here is the card I made for my hubby.  I saw a cute puffin image with a Santa hat and thought I would do my own version of it.   Puffins are such fun little birds and the seasonal hat goes perfectly with his bright red beak, so it was meant to be..lol. 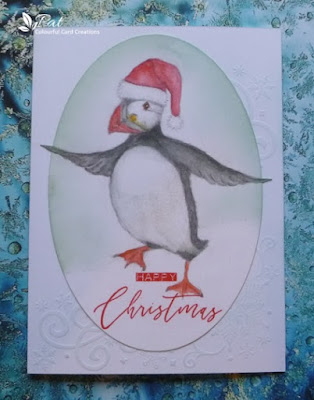 I did it in pencil and then coloured with my Inktense Pencils using a waterbrush to wet the tip for more control of the colour.  I ink blended the background using Tumbled Glass Distress Ink and then added the sentiment using Versafine Habanero with some Satin Red added over the top which I thought made a slightly more orangy red.  I decided to die cut it into an oval shape but my largest oval die didn't quite fit so I did the over the edge technique where you cut out the part to go over the top and then slide the die underneath the cut pieces so they are left over the edge.  I embossed the background card with a Crafter's Companion EF called Touch of Winter which I bought at The Range a while ago.   I then went over the raised pattern with some of the Tumbled Glass DI using a blending tool, just lightly so as not to detract from the main image too much.

I was going to show our son's card too on this post but although it was sent on 2nd December he still hasn't received it!  Last year I sent it a few days later and he got it several days before Christmas, so I am not a happy bunny.  His to us this year arrived nearly a week before Christmas and he posted it a good few days after the one to him...random or what!  Hopefully it will arrive soon.

Thank you for visiting today and I'll see you again soon.

River of Creativity Challenge - No. 8 Celebrate.

A fun puffin. Oval dies often cause problems because of their proportions but yours was a good way to overcome it.

It's a lovely bright and happy card Pat and with a fun element added with the hat, thanks so much for sharing with us at River of Creativity.

Love your little hand drawn Puffin it really is the star of your card. Thank you for joining the flow at River of Creativity xx

They are funny indeed, this one is a cutie and your card featuring his is great!
The post here is sometimes terrible too, my son did not receive his card, I hand delivered another one.

such a sweet card
x Karen