Hi there.  I am as usual quite late with my card for the CAS Mix Up Challenge which this time is Stencils with Pastes/Gels...really lovely to see it back after several months absence.  I don't use this technique very often and I had to search a bit to actually find something to use.  I found some Cosmic Shimmer Multi-Tex which is a bit like polyfilla and you mix it with water.  I added some colour with Pixie Powders in a blue and green to make a sort of turquoise colour, and I have a new die which I used for the card on my last post here which I used as a stencil.  I also used a set of stamps by Creative Expressions called Waterlily. 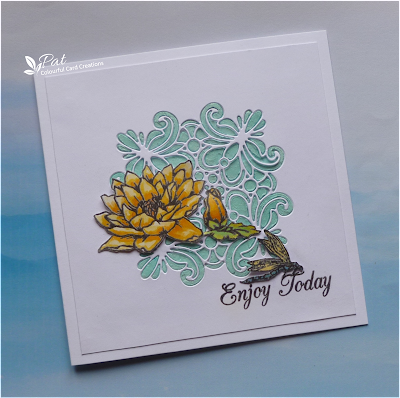 I started with a piece of card just a little smaller than my 6"square card and placed the die cut stencil, which I cut from card, centrally, and using an old plastic store card I created the texture paste background.  I am not very skilled at this technique and some of it went underneath the stencil and wasn't very tidy, so I decided to cut that down and then add a die cut piece of card using the same die to go over the top, and I left a bit of extra space round the edge to make it easier to get it to fit properly on the card, and before doing this I used a bit of Glossy Accents over the paste to give it a bit of a shine applied using a piece of kitchen towel dabbing it on, and in real life it is quite shiny.

I then stamped the flowers and dragonfly on to a piece of white card using Versafine Clair Nocturne Ink and heat embossed with WOW Clear Gloss Embossing Powder and coloured with Distress Inks and a waterbrush using Scattered Straw and Fossilized Amber for the flowers, and with just a little bit of Abandoned Coral to stengthen the colour in the centre of the flower, and then for the leaf I used Twisted Citron and Lucky Clover.  I coloured the dragonfly with a bit of Peacock Feathers for the body to match the tone of the background, but it looks more blue than turquoise in the photo, and Adirondack Sunshine Yellow on the wings with some added Wink of Stellar for a little sparkle.   I think maybe the black embossed outlines are a bit heavy for the dragonfly but I wanted it to match the waterlily flowers and leaves.

I finished with a sentiment from the same set stamped with the Nocturne Ink and heat embossed with the Clear EP.

Before I go I would like to introduce and also thank Marja for becoming a follower, whose blog you will find here, and I'm sure she would love you to go and visit her.  Thank you for dropping by today and I hope to see you again soon. 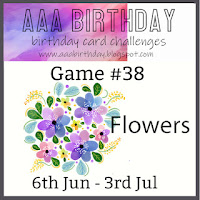 This is a technique which I've not really tried but you've made a lovely card - always to have a go at something new now and then.

Beautiful card Pat! LOVE how you've used the pretty die to create a stencil for the background. Adding the colours to your paste is a great way to get exactly the colour you want. This turquoise is so pretty! And adding glossy accents to add shine is so clever ... will have to remember that! :) The yellow of your lily is so pretty against the turquoise background. Thanks for sharing with us at CAS Mix Up! xx

This is a perfect example of a card that evolves Pat! You've made a great job and the paste stencil looks wonderful with the die cut over the top. I love the little grouping of the flower, dragonfly and sentiment too. Vicky x

A wonderful card Pat and very inventive with your supplies!
The background is a beautiful shade and complements your flowers perfectly.
I always have a bit of 'seepage' under a stencil when using pastes too!
Thanks so much for sharing with us at CAS Mix UP. x

What a stunning card Pat, I love the die cut with the lovely blue card behind it, beautifully coloured flowers and design, Kate x

I LOVE the color you got in your paste, Pat! It's so cool and refreshing and the white details are so pretty with it as well as this gorgeous and dragonfly! So glad you joined us at CAS Mix Up!

This is beautiful, Pat! Well done creating your own stencil and I love the color and movement of your design! Thank you for playing in the CAS Mix Up Challenge! Hugs, Darnell (June GD)

Gorgeous die cut background to use for your stenciling with your pretty turquoise colored paste, Pat. A wonderful mixed media background for your pretty water lilies. So pleased you joined us at CAS Mix Up. Hugs...Nancy

You have been busy!
I enlarged the image to have a better look at your card. Beautiful layering and how lovely is that flower, which you coloured beautifully! The little dragonfly is great together with the sentiment!

Beautiful elegant card, Pat! Love your pasting and how you colored and accented it. The die cut is fabulous with the flower and dragonfly, xoxo

Absolutely beautiful design Pat, the die cut centre is stunning and if course perfect in yellow and blue. Thank you so much for joining us at The Flower Challenge DT Aileen

Fabulous card, love the dimensions and the layering! The flowers and dragonfly are so beautifully coloured and the paste with the glossy looks great!
Thanks so much for sharing with us at We Love Stamping!

Beautiful Pat, love how you used the die cut as a stencil. Gorgeous colours ♥

Beautifully made, thank so much for sharing with us at We Love Stamping June challenge.

I Card Everyone said...

Pat, I am so delighted that you've joined us again at The Flower Challenge! I adore water lilies - in fact I saw some in yellow while fishing on Saturday! Not one bit as pretty as yours, btw. And you've also included one of my little 'hitchhikers!'
A perfectly wonderful card! Thanks so much for playing! x
=] Michele

Beautifully coloured and placed images, gorgeous card. Thanks for playing at AAA Birthday, hope to see you join in with future challenges too. Stay safe and keep crafting!

This is gorgeous Pat. Thank you so much for sharing your lovely creation with us at We Love Stamping.
Hugs
Cathy
xxxx

Such a lovely card! Your colouring is beautiful! Thank you for sharing and playing along with us at AAA Birthday! Hope to see you in future challenges too! Take care and keep crafting!