Hi Everybody.  I got some new stamps before Christmas and this is the first opportunity I have had to try them out.  They are by Sheena Douglass from her A Little Bit Scenic range with a seaside theme, the first is Sea Scapes, and the second is Sea Shells.  I have a male birthday coming up so thought these stamps would fit the bill.  The light was not good for photos today, as this looks cream instead of white, but I did my best. 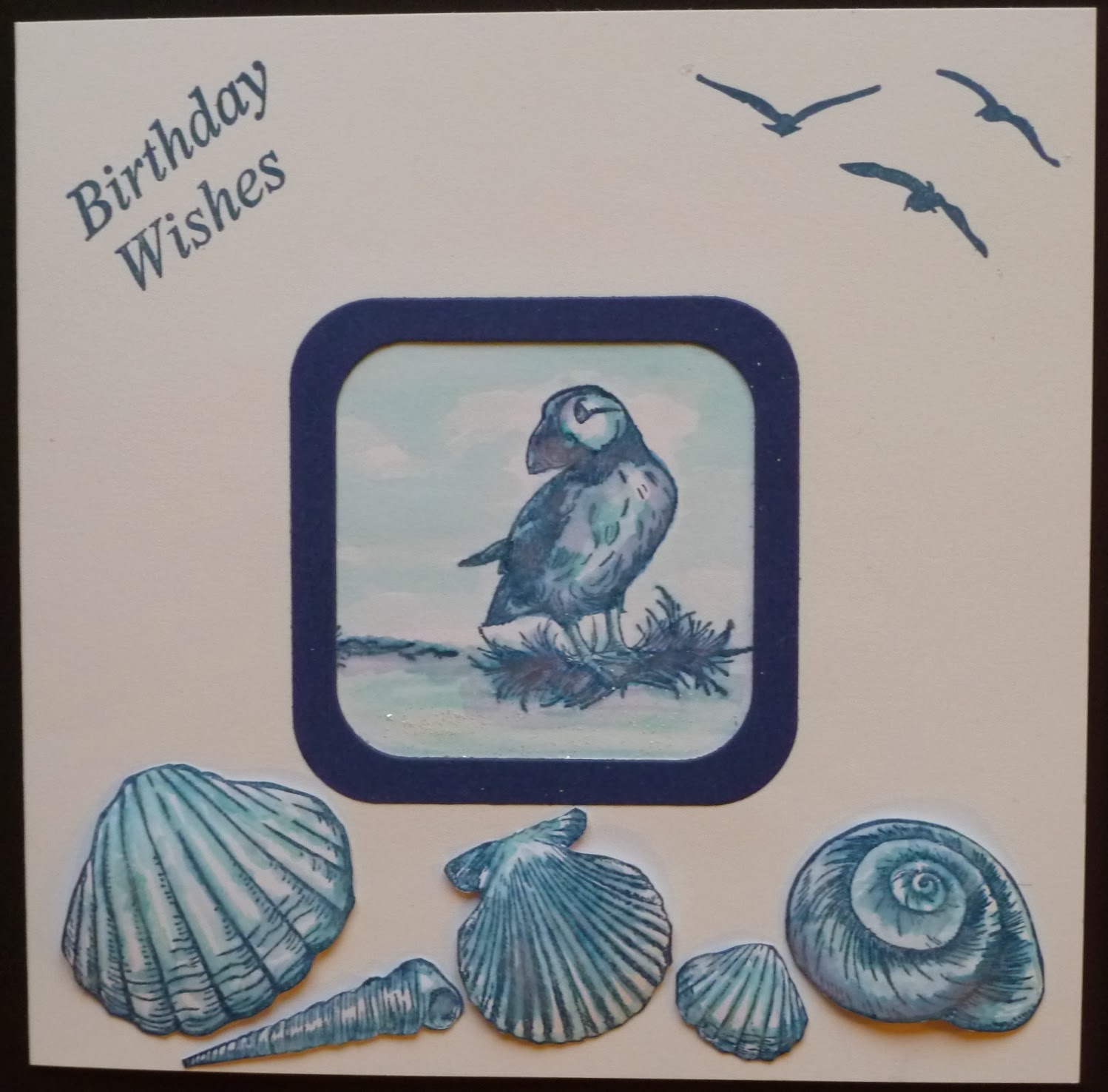 I stamped the Puffin on a piece of Stamping Card using Memento Nautical Blue, and dragged the ink in with a waterbrush to give it some shading, and I also added a touch of Distress Inks in Peacock Feathers and Seedless Preserves.  I cut an aperture out of a square white card using a S/B Rounded Squares die, and then cut a frame with the same set of dies, from navy blue cardstock.  I placed the frame round the opening and then fixed the Puffin behind the aperture glued to the front of the card and made tidy by placing a piece of white cardstock over the reverse.  I then stamped some of the shells on to snippets/scraps of white stamping card using the Memento Nautical Blue, and coloured them again by using a waterbrush with the same inks as above.  I cut them out and stuck them to the card with some Pinflair dimensional glue gel.  I then stamped a sentiment and the three birds.

I hope that everyone whose year has started badly with the atrocious weather that seems to be affecting people here, and also across the globe, in one form of another, will soon see some improvement.  Anyway, I send my best wishes to you all.

This is a great card for a man. I love the puffin stamp and the sea shells give the whole a nice seaside feel.
Jean x

Great card Pat and those stamps are super. I love to read how you made things work, and the background is really beautiful.

Pat, lovely card. The addition of the DI to the Memento blue really enhanced the colors on this pretty bird. Liked the rounded square corners of the framing too. Great touch, and the seashells are beautiful. Really nice card for a special fella, and the recipient is going to love this one. TFS & Hugs

This is just super!
Thanks so much
Chrissie
"Less is More"

Great job with the new set, Pat, and a great guy card! Your puffin looks like a painted scene!! Have a great weekend! Hugs, Darnell

A beautiful card Pat - love the monochrome design. Thank you for visiting my blog and taking the time to leave a comment - I really appreciate it.

Holy cow! I could NOT believe it when I read that these seashells were paper! I thought they were actual shells...or at least 3D embellishment shells. You have some serious skills with ink and a waterbrush because the dimension you created on these are absolutely phenomenal! I adore the sea and this card was so refreshing with the color palette and the images you combined. I loved the window frame you created and again, I'm really impressed with your talents at blending color! A beautiful piece and I'm so glad you shared your talents with us here at the Simon Says Stamp Monday Challenge blog!

Hi Pat, thanks so much for joining us at ATCAS with this super card, I love those sea shells and the Puffin is amazing and such lovely colors too.