Hi all.  I have recently acquired a 6" x 6" Gelli Plate from Claritystamp.  Barbara Gray has been a big influence on my decision to buy one as she has been using them for a good few months now, and I have become so intrigued that I finally decided to give it a go.  I am certainly no expert yet as I have only had one session with it, but I did manage to make a few prints which I was reasonably happy with.  For those of you who have no idea what it is, it is made of a plastic material which contains some mineral oil and can be used with water based inks and acrylic paints which sit on the surface very evenly, and once inked patterns can be made in it with your finger, soft tipped implements, stencils laid on it, and even opened out embossing folders providing there are no sharp edges which might damage the surface and leave permanent marks or impressions on it.  As the name implies it is flexible and jelly like, and I have seen on the net that some people have been making their own, but it needs to be perfectly smooth and I can't imagine that making it yourself can be that easy, and I'm sure it would be much more easily  damaged than the bought one.

Anyway, here is my first attempt. 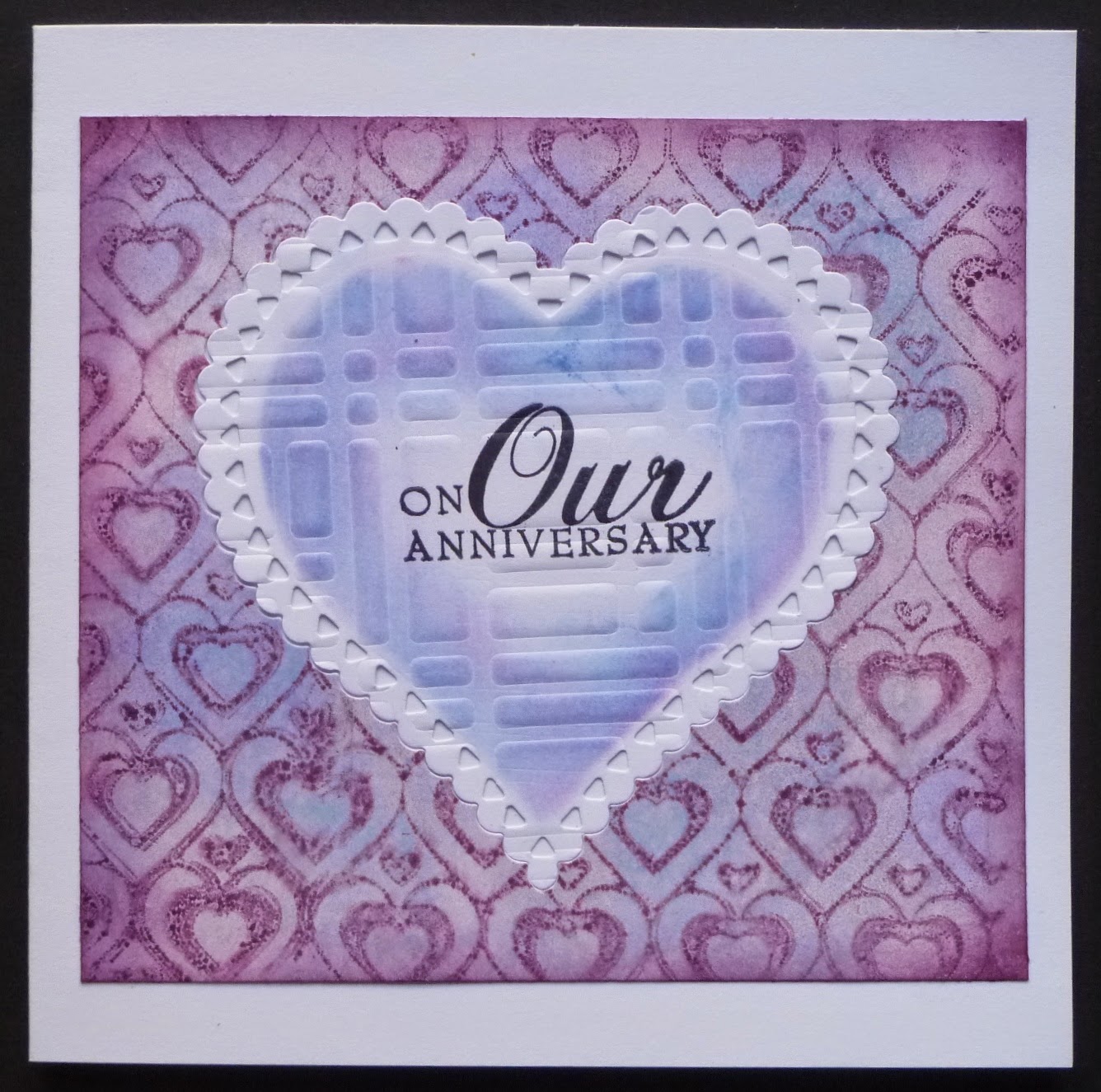 I started by laying the plate on a piece of card on top of a craft sheet.  The card you are going to use for the prints should be cut to the same size so that if you make a print then decide to add another layer you can line up with the underneath piece of card.  As I have not got any acrylic paints yet I used my Adirondack Pink Sherbet pad pressed on to the plate randomly and brayered it to cover.  I then took my Cuttlebug Folder Kimmy-Luvs and inked up the raised side of the folder with Seedless Preserves ink and laid it on to the plate then pressed down to leave an inky impression and lifted it away, and then repeated the process to extend the pattern.  I took a piece of the card and laid it over the plate, rubbed it firmly on the back with the brayer and peeled it away from the plate.  You never quite know what you will get but the pattern from the embossing folder came out quite clearly.  When the print was dry I blended some more Seedless Preserves round the edges and added a very little more Adirondack Stonewashed which made a nice lilac blue when it mixed with the pink already on the print.

It was made up using a  Nellie Snellen Multi Frame Heart,  the largest die.  After die cutting the heart from a snippet of white card I used a That Special Touch Mask - Funky and ran it through my embossing machine and then inked it with Pink Sherbet and then Stonewashed over the top to give that same lilac colour, leaving the die in place to keep a white edge.  I die cut the heart out of the print and adhered it to a square card, and  then embedded the new heart into the negative shape left behind.  I have seen this done by various people but have never tried it myself before.  I put a personal sentiment on the card so I could give it to DH for our Anniversary.  I thought perhaps it might be a bit girlie but luckily the overall colour was more purple than pink and he did say he liked it (I don't think he was just being polite).

I hope this has been of interest to those of you who perhaps have never come across the Gelli Plate before, and that those of you who already have one or have seen one used will not have been too bored by my long winded explanation.  I will in time buy some acrylic paints which I think on the whole will work better with it than the inks.  The plate can be cleaned with water and dried with a piece of kitchen towel, and also baby wipes will work too.

Thank you for looking and see the next blog for a further card using the Gelli Plate.

Pat, I'm trying to do some catchup, and zipped over to check out here. I've had a gelli for over a year now,not tried it once! This is just LOVELY - hard to believe it's your 1st effort. You did Beautifully! I will be back to slowly read through how you did this ...trying to pay visits and then get back to cleaning in the stamp area! Hope your Sunday is going great. Hugs & TFS

Hi again Pat, I finally got time to come back for a more leisurely visit & read through your how-to. Now I've never seen where anyone inked the Gelli with an ink pad, but how clever of you to try it. It yielded a fantastic look with the other things you tried. I'm thinking this is probably a lot easier (& less messy than blobbing acrylic paint all over the plate). I don't think it looked 'girlie' especially with the colors you've chosen. I think it's pretty & obviously your DH has good taste, cause he did too! The heart is very sweet and since it was for your anniversary, very appropriate in my humble opinion. WTGo in your first experiment & you are way ahead of me! You did great on the embed technique too. That looks easier than it is to do (for my first try anyway!) But it's a beautiful look and you've got it nailed superbly well. Love this one a lot, and thanks for all the good ideas. Who knows, I may get caught up with things and get brave enough to try the Gelli! I saw it last summer in a store up in New England. Had not seen it locally, but had been seeing it all over the net. Still not seeing a lot of Gelli-s available around my area..but then we have few stamp stores, just the 'box' stores, and they don't even pretend to keep up to date. TFS & Hugs.Happy Anniversary, and Happy week ahead too.

Another beautiful Gelli plate print, it works fabulously for the background to the heart. Have a great day, Shirleyx

Wow Pat , I love your gelly plate background I love it and I really love haerts!!!