Poppies for a Birthday

Hi all.  I wanted to make a birthday card using the lovely Papermania black and white papers which I was lucky enough to win about three weeks' ago over at Pixie's Playground.  I decided to use a set of stamps from Chocolate Baroque called Poppy Meadow, and also the current sketch over at Mojo Monday.

I changed the shape to a square card as that is my shape of choice as you will probably have guessed, and I found two of the Papermania papers which I thought would work together and backed with snippets of black card,  on one of which I used a Nellie Snellen Multi Frame Borders - Three die down the side.  I stamped the poppy on to a snippet of white card using Archival Black ink, and coloured using the new Spectrum Noir Polychromos Pencils.  In fact this is the first time I have used them, but have to say I really like them.  They are are quite soft and waxy and impart a lovely sheen on to the image, and blend together extremely well.  I then die cut the shape using Spellbinders Nestibilities - Rounded Squares using the second largest die. 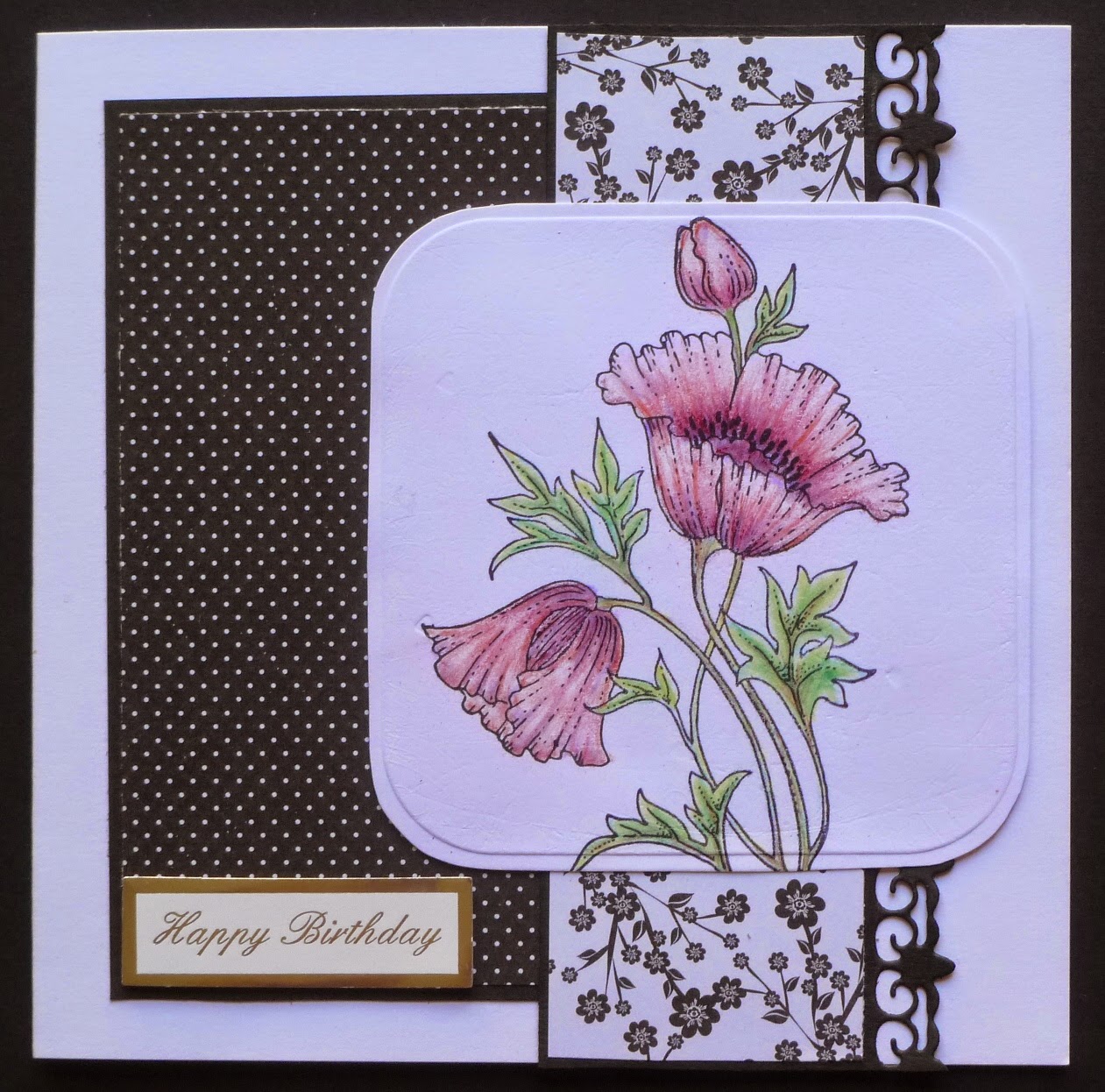 I finished the card by adding a Papermania sentiment, a packet of which was also part of the candy.  The only part of the sketch I omitted was the flower embellishment, but then I used the sentiment albeit in a slightly different place, so hope this is ok for the challenge.

Thank you for taking a look today, and see you again soon.

Mojo Monday - 353 - Contest
Pixie's Crafty Workshop - using snippets/scraps of card or paper, and I have used some snippets of black and white card.
Simon Says Monday Challenge - Start from Scratch.  My flower topper was plain white card stamped and then coloured and die cut.

This is such a beautiful card Pat. I am not sure I would of thought of using black and white backing papers on a flower card but I absolutely love the effect with your pretty beautifully coloured poppy. I really like the edge die you used as well.
Jean x

Oh what a lovely card Pat! Gorgeous flowers and so nice to see you using the papers you won here! Have a lovely weekend :-)

This is so pretty. That is a wonderful poppy stamp!!

Gorgeous Pat, I love the lay-out and colours. The Poppy is so pretty in pink :) I hope you are having a great weekend, Shirleyx

So very pretty! Thanks for joining along with the Simon Says Stamp Monday Challenge!

Spectacular use of the Playground win. Congrats to you if I didn't get round to say that before. I'm loving this wonderful card and the way you made the sketch all your own. I've been hearing some great things about these pencils too, didn't realize Noir was making them. Your coloring is fantastic, as it is so soft but yet you've got some beautiful shading going on. TFS & Hugs. (sorry your visitor bailed out, but on the positive side, your house is all clean! Now you have craft time or relaxation time!)