Hi there all.  Hope you had a good weekend  Here at the start of another week things have not been going so well on the card making front!  I made this birthday card, as usual a bit at the last minute, and it wasn't really going well.  This morning on inspecting it again I decided the edge was not straight so tried to lift it enough to get a pair of scissors underneath it.  BIG MISTAKE!   This usually works as the photo glue lifts relatively easily, but today it was not playing ball.  In the end I had to remove it completely from the base card which was wrecked in the process, and then straighten the edge up and fix to a new card.  The good news was that it had a much straighter edge, and the bad news was it got a bit creased in the process.  I did decide to send it anyway as I dare the say the recipient will look at the card and not notice anything that much amiss, and as I was pleased with the design I decided to put it up here anyway.  Mind you now I can see that the top edge could have done with a bit of surgery too.  Anyway here is the card. 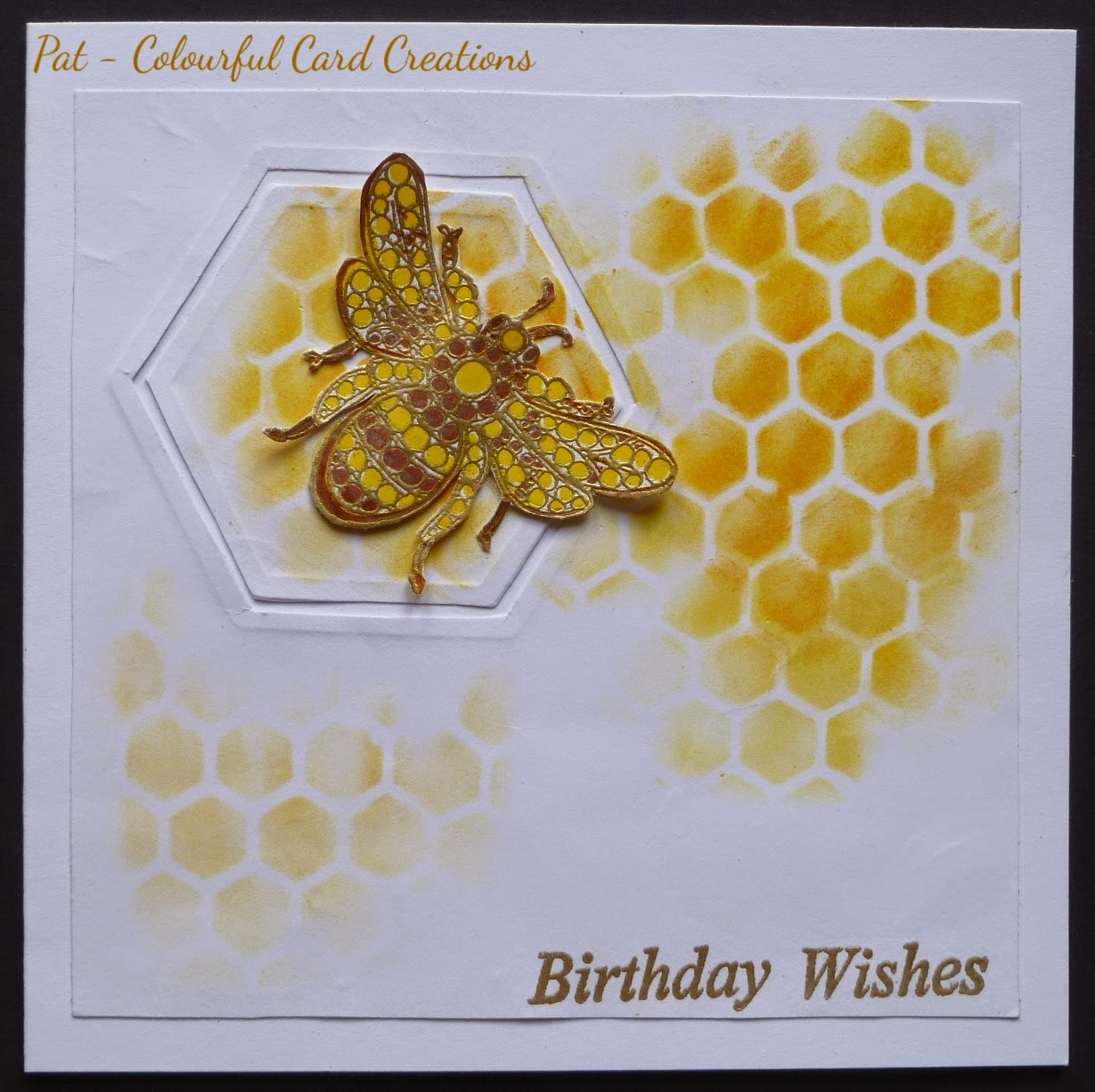 I originally saw the bee and the hexagon on CAS(E) this Sketch  and thought of this stamp which is in a set from Sheena Douglass called Floral Fantasy - Violets.  The hexagon die is from a set by Xcut.  I used  a 5" square snippet of white card for the layer.  I originally wanted to emboss with two of the dies layered up, and tried several times, but maybe the dies are to thin and the card too thick because they just would not play ball.  I even tried several shims to make the sandwich a little bit thicker, but in the end they started to cut even though the cutting edge was under the silicon mat, so I decided to cut out rather than waste the piece.

The next step was to stencil using this Tim Holtz - Honeycomb.  I blended the ink,  right across the hexagon using some blending foam and Adirondack - Sunshine Yellow and Distress Ink - Spiced Marmalade over the top to darken and shade.  In the photo the lighter colour doesn't really show up.  I adhered this layer to the base card and stuck the smaller hexagon in place.  I added the area to the bottom left as an after thought and decided to keep it light by using just the remnants of the ink left on the blending foam.

Lastly I stamped the bee using a snippet of white card and Versamark and then heat embossed using WOW Gold EP.  I coloured it using Promarkers in Canary and Henna, and cut it out and positioned using Pinflair Glue Gel to give a little shape.  I then stamped the sentiment and heat embossed with the WOW Gold EP.

Well, whinging over, and I hope you feel the card was worth a viewing.    I'm sure I'm not the first and won't be the last crafter to find that things don't always go to plan and that creating cards is not an exact science.

Thank you for looking at my blog today and I would like to welcome two new followers.  They are Liz of  Crafty Sunflower, and Jennifer of Jennifer's Crafting Rainbows.  There are plenty of lovely things to see on both their sites so please do go give them a visit.

Pixie's Crafty Workshop - Week 137 where we use up snippets of card and paper.
Addicted to CAS - No. 44 - Gold.  I have used gold embossing.

Well, I trust you if you said something was not straight. I surely can't see it! This is so pretty. Love that golden bee and your embossing over the honeycomb stencil was gorgeous. I'm thinking you are correct that the recipient is not going to notice any of the problems you think are there! Now this is really beautiful (and nothing like my boo-boo! :0 But you were kind to say so!!! This is a very nice card, and you can be proud of it. I'm so glad you shared it! I'll check out Jennifer...just met Liz. TFS & Hugs

Ooooh, it's lovely Pat! Brilliant save and I bet the recipient loves it!

I'm not too sure if you meant you were trying to emboss using a couple of biggish hexagon dies - where the bee is sitting? One trick is to use the die on thereverse of the card - lay it down on something like a mouse mat with a bit of 'give' in it and run a ball ended tool round the die. If course positioning it would take some thinking about - tee, hee - if it was me and there would be a bee on top of the embossed hexagon frame I'd make a teeny little pin prick where the die centre ought to be on the front of the card and use that as my guide on the reverse :)

A super result!! Love it Pat.

Fabulous card Pat. Love the inking, and the Bee is awesome!
Thank you for joining in our "Gold" challenge at ATCAS - Sylvia x

I sympathise with you Pat, I have ruined many cards by trying to correct something probably only I could see was wrong. Never mind your card finished up looking beautifully summery and I am sure the recipient loved it.
Jean x

Lovely card - sure the recipient loved it.

I am liking this card. Sometimes they decide to try us and we are our own worst critics. Being a bee keeper's wife I love it.
Hugs
xx

I had a little chuckle reading your card making story this time. Sounds a bit reminiscent of my story! But amazing how we can fix anything!

I had a few say glue on the hand and then run the die across, so will try this...I also plan to get some of that spray glue (when my frozen status is over). I have in the past also used a blob of glossy accents but on items thin finely cut, it can ooze out and then you see the glossy bit!

Your honeycomb and the bee are great. Love the subtle inking you have done. Finishes it off perfectly!

Oh, Lordie, Pat, could I ever relate to your recounting of what this card went through. It made me laugh - you know, one of those times you laugh to keep from crying?! Since I've been taking pictures or scanning my cards for years, what always gets me is seeing a card that I made years ago and noticing NOW how crooked my mats were! Geez. I guess we see what we want to see, huh? But when you are a bit of a perfectionist (cough) and you notice it before you send it out or photograph it, you find yourself involuntarily trying to lift the sections of card in order to fix it, dammit! LOL!

In this case, yes, it was definitely worth all the hassle and a few creases! It is a truly sensational design so I'm glad you shared it! Have a great weekend! Hugs, Darnell

Just found your blog, so enjoyed looking around, you make some really lovely cards. I have become a follower so I shall be calling in to see your lovely creations regularly, hope you'll come and visit me too.
Hugs Jacee
Simply Paper Card Design

I somehow missed this post last week. Thanks for the welcome as one of your newest followers. I'm glad I'm not the only one who makes the mistake of trying to adjust something on a card, only for it to go terribly wrong! It certainly turned out well in the end - it's a beautiful card! x