Birds on a Branch Anniversary

Hi all, and here is an Anniversary card I made for some good  friends whose 20th Wedding Anniversary was towards the end of November.  When it comes to Anniversary cards my mind seems to go down the same routes all the time, so had a look around for fresh ideas and found that the pair of birds idea came up quite a bit, and I don't think I have used birds on any of my recent cards.  A particular bird punch by Stamping Up  kept appearing, and as I don't own this punch and needed the card in a hurry, I decided to try making a bird of my own design.  It does look a little similar but the punch gave the bird just one wing but I have given mine two and the tail shape is a bit different.   I tinkered about a bit and finally drew one I was happy with, so just reversed it for the other bird to make a matching pair. 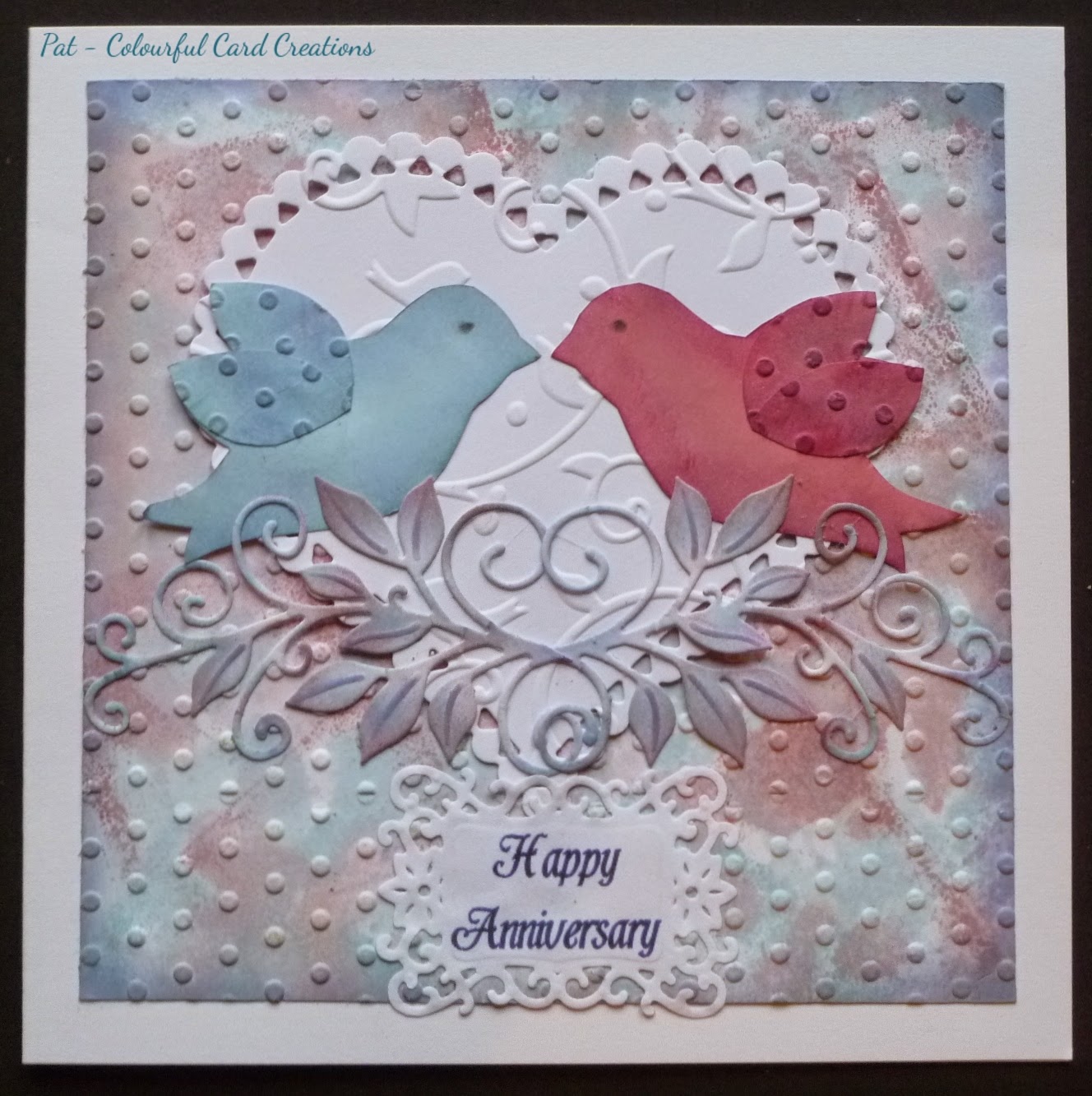 I used my Gelli Plate and Distress Inks in Tumbled Glass and Victorian Velvet with a snippet of white card applying the ink direct from the pad to the plate, and in this instance I think I mixed them together with my finger and then misted with a little water and pulled the print.  I think I may then have added some more Victorian Velvet  to random areas of the plate and misted then put the card back on the plate and pulled the print again just to darken the colour a little.  I then cut the background to size and ran it through a Card Concepts EF called More Dots.  I had to extend the pattern as the EF was rectangular not square, but with this simple pattern it proved quite easy to do.   I finished the background by inking a little more round the edges with Distress Ink - Faded Jeans.

The heart topper was made from another snippet of white card and using a Nellie Snellen Multi Frame Heart die, after which it was embossed using a folder by Cuttlebug called Birds and Swirls.  I then cut the birds from snippets of pink and blue paper from a pad of plain papers from Dovecraft, and cut the wings separately and ran them through the CC folder and attached them to the birds and pencilled an eye on each.  I decided to add a little shading to each bird with some Tumbled Glass and Faded Jeans on the blue, and Picked Raspberry and then to darken the wings a little of the Faded Jeans.  The branches were made using the Sue Wilson die - Petite Vinery.  I inked up the veins of the leaves while they were still in the die using Faded Jeans, and then I cut each branch a little shorter and coloured with the Tumbled Glass and Victorian Velvet inks.

Finally after assembling the card I ran off the sentiment on the computer and then made a mat for it using Spellbinders Decorative Elements  die Labels Eight.

I am entering my card in the following challenge:

Pixie's Crafty Workshop - Week 150 where we us up our snippets of paper and card.

Well done for making your own love birds Pat, what a good idea, they look great sitting on the beautiful die cut branch.I love the colours and super embossing in the background too.
Jean x

This is a wonderful look, Pat. Enjoyed reading the how-to's with the gelli plate (just passed your link along to a 'gelli - wonderer' too). Love that background, and I'm beyond impressed that you made your own birds. They look so much more finished with the 2 wings and the pretty embossing. That SW flourish leaf & delicate doily sent this one over the top, and it's a marvelous anniversary card. You rocked it, girl! TFS & Hugs.

Very beautiful design Pat, I love the combination of the die cuts, embossing and colours. Your birds are fantastic! Have a great day, Shirleyx

This is gorgeous Pat! How enterprising to make those birds as you did! Well tinkered :)

What can be better for an anniversary card than two adorable lovebirds?! Your handmade birds are fabulous, Pat! I usually do see birds with two wings, now that you mention it, so thank you for making them anatomically correct. (Sorry, my droll sense of humor.) Your background coloring is divine, too! This is a standout snippets make!! Hugs, Darnell