Hi there all.  I hope your weekend has started well.  A few days ago I needed a male birthday card and I was musing about what I might do and was just surfing the internet when I came upon this optical design by Julianna Kunstler which you can find here.  I was completely bowled over by it and just had to grab a piece of paper and follow her instructions for making it, to the best of my ability anyway.  I really thought that it would probably end up in the bin so chose a snippet of inkjet paper that had a sentiment which had been printed wrongly on one end so I cut this down to round about 51/2 inches square.  With hindsight it would probably have been better on something a bit more substantial.  Something like this is completely therapeutic and apart from cooking dinner and then eating it, I was determined to sit and finish it.  I must admit that by the time I had completed it my fingers were aching somewhat but I was quite happy with the effect. 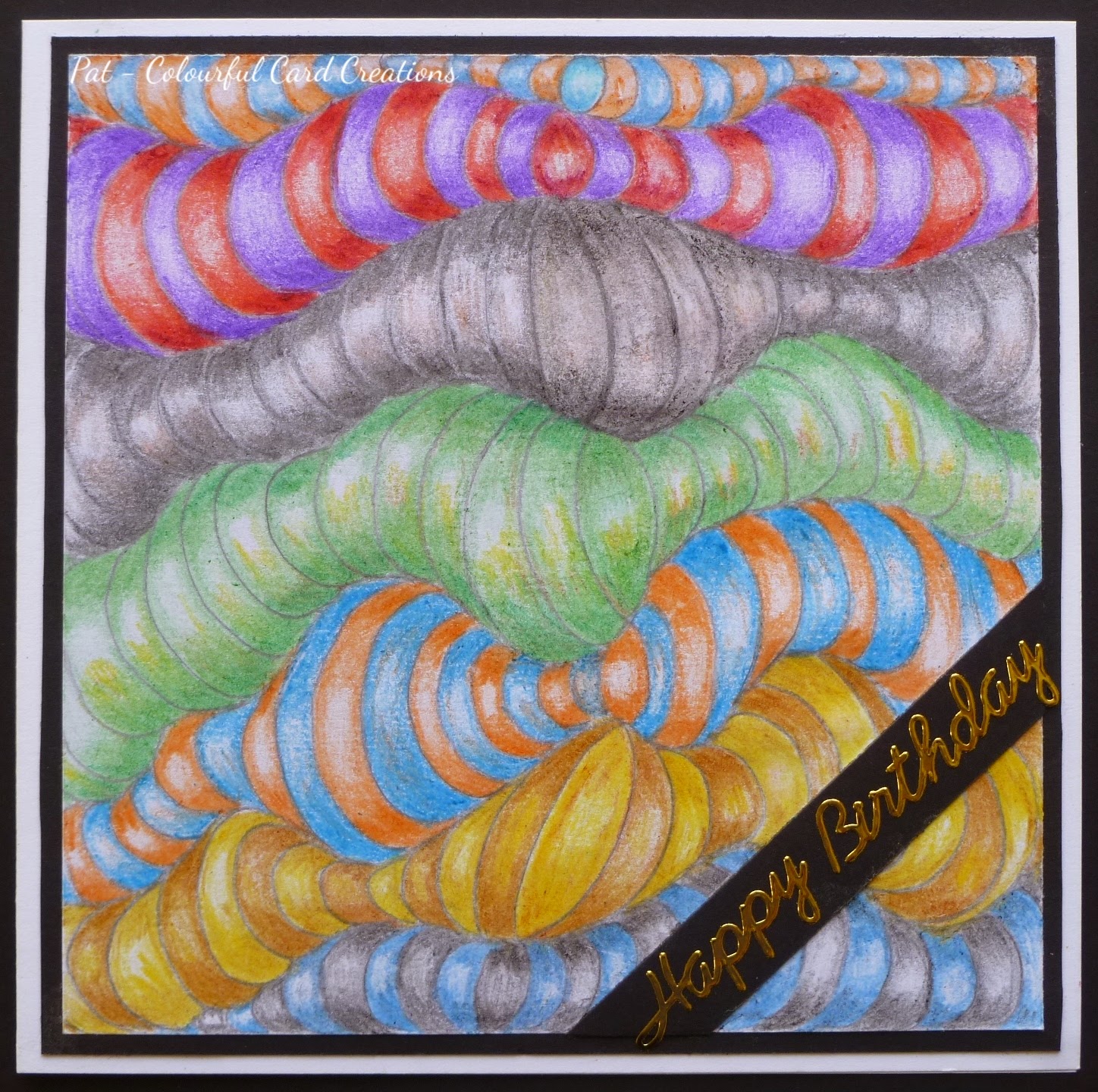 She suggests you start with series of vertical wavy lines and then put one wavy line across the middle, and this is where you start pencilling in the segments so that all the lines curve towards the centre.  I will say at this point that when I mounted it I twisted the whole thing round by 90 degrees so the tubes are running horizontally not vertically.  You can use a fine line pen but I decided to pencil so I could erase and change anything I didn't like.  After all the lines were done  I started to colour with my Spectrum Noir pencils.  I started with the two plain tubes thinking this would be easier to achieve, but frankly after doing two plain ones I thought it would look more interesting if I alternated the colours.

I didn't at first think that this would work as a birthday card, but once I had mounted it on to a snippet of black card and then adhered this to the square white base card I began to think that maybe it was ok.  I finished by adding a strip of black card on which I added the sentiment.

Thank you for looking today.

It works!! What a fab idea and altho' your hand may have been aching I guess the acutal colouring could be come quite therapeutic! Great job Pat. x

Great design Pat, you must have a lot of patience. Love your colouring, it really adds to the shape and movement.
Jean x

Wonderful idea for a masculine card. Great coloring. Alternating the colors sure made them pop.

This is amazing, and you are one adventurous artist! This looks as though it should be framed & hung, Pat! Thanks for explaining how you did this & what products you used. The pencils & SN worked really nicely together to create this very artistic look and it made into a lovely card. Bet you will be doing more of these, since the first try turned out so beautifully. Hmmm...bet this would look great over one of your gelli prints too, huh? TFS & Happy upcoming week. Hugs