Hi all.   I really do need to get a move on with my Christmas cards.  Well here is another to swell the ranks a bit!  I thought I would try and enter some challenges to focus my mind a bit and I need to get a move on as this is for Merry Monday where the challenge is Feathered Friends.  Well I have quite a few Christmas stamps and dies now but don't have a suitable bird amongst them so thought I would attempt to make my own.  I do love robins so did my best to make him look reasonably the right shape and size.   I think he looks as though he has been eating too many worms but hey ho I did the best job I could. 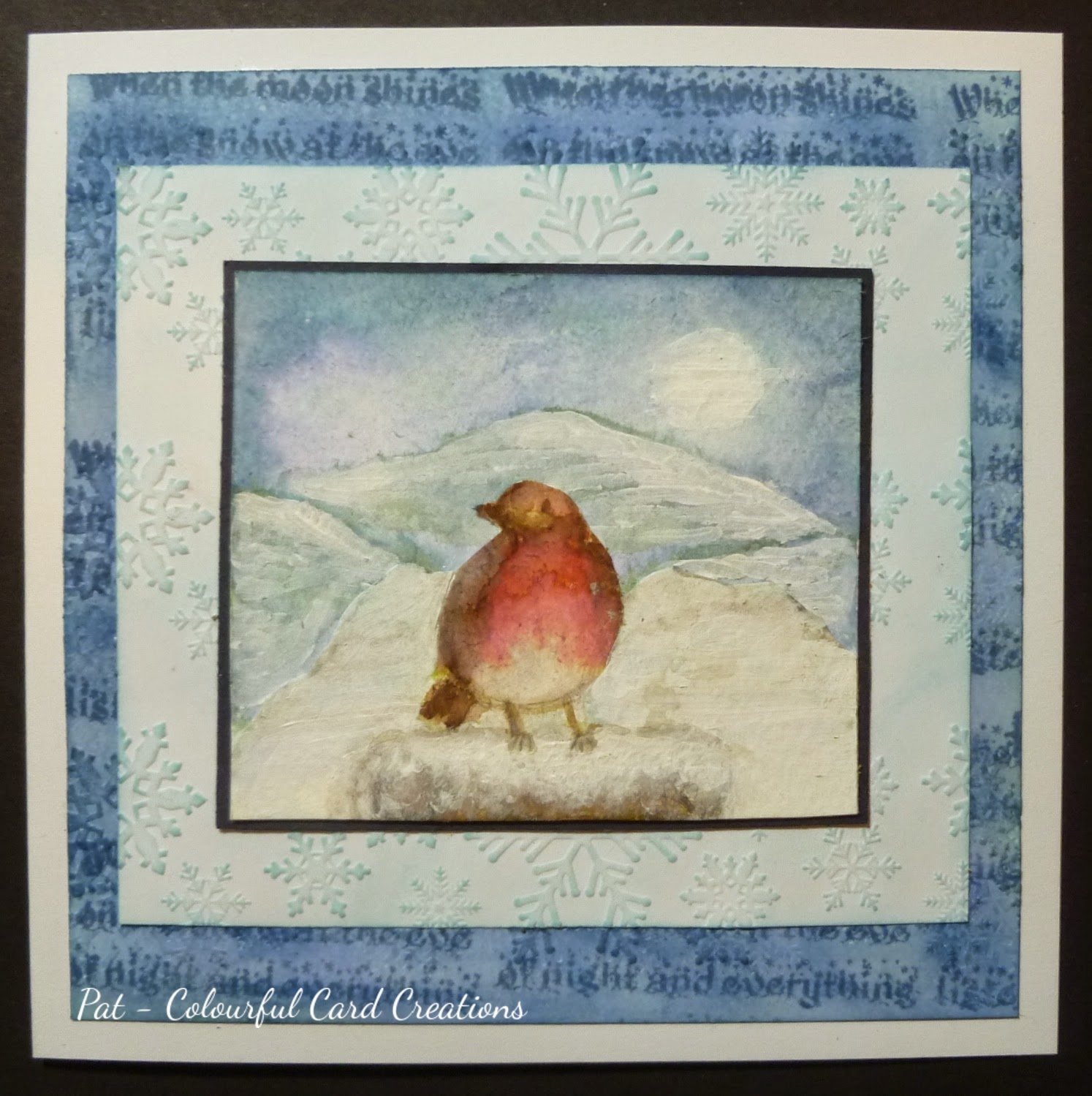 My first attempt was a snowy woodland behind the robin, but I fiddled too much and ruined it, so cut out the robin and the snowy foreground and attempted a different background with a few hills behind which I felt ended up a bit better.  I used a snippet of Watercolour Paper and my Distress inks, mixed with a little water and applied with a brush, in Tumbled Glass and Faded Jeans and a little Shaded Lilac and then I added a bit of white acrylic paint over the hills, sun/moon (to be honest I think this could be day or night),  and also the foreground snow and the post the robin is sitting on.  There is also a bit of Walnut Stain on the post.  I finished this layer by mounting it on to a snippet of dark blue card.

The background uses one of  the stamp from a set by Indigoblu called Here Comes Santa.  I stamped the sentiment all over a piece of  white card using Faded Jeans DI, and to add a bit more dimension I then embossed it using a freebie snowflake border three times and then cover the whole thing with the Faded Jeans which then highlighted the snowflakes as well, but this is a little difficult to see as the next layer covers quite a bit of it.  The words on the stamp came out rather blurred in some places but I decided that as it is only a background this would be fine.

On the next layer I used a snippet of white card and the same freebie snowflake border on it three times to fill and then used some Tumbled Glass DI to highlight the snowflakes.  I decided to leave the sentiment for now.

Cannot believe you did this robin yourself Pat!!! He is fantastic! Great card. x

To have created your robin from scratch is a great achievement. He looks fab . I love your background too. Hugs Mrs A.

WOW! This is amazing, Pat! Great job. Thank you for joining us at Merry Monday!

Wow Pat! you clever lady, your robin is amazing and I love the background too.
Hugs Jennifer xx

What a lovely soft wintery scene.

THis is so pretty! Love the cute birdy! Thank you so much for joining us at Simon Says Stamp Monday Challenge. Hugs, Sandra

Always love reading how you've created your card. Love that you drew your own robin, good show! He looks quite like a PBlack stamp I've been seeing (like yours better I must say). You've got great color on him, and am loving the snowy backgrounds. Your art work is just awesome. Well done...as usual. TFS & Hugs

Your Robin and your Robin card are fantastic!
You are quite the artist...I wouod never have know that wasn't a stamp!

Love the bird's background...and the pretty blue DP you made.to mat it all on!