Hi there everyone.  This is a NBUS stamp which I bought fairly recently from IndigoBlu called Blue's Look Out as I just couldn't resist this cute cat. 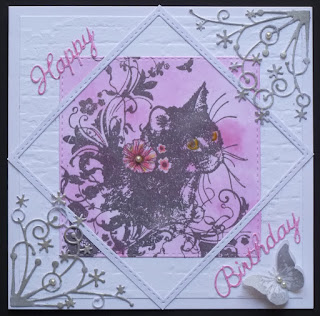 I started by watercolouring a snippet of white cardstock using the smooshing technique and Adirondack Shell Pink and Distress Ink Picked Raspberry.   I then stamped the image on to this watercoloured card using Versafine Smokey Gray ink and then die cut the image mat using a Simon Says Stitched Square, the largest die.  The stamped image didn't quite fit into the square die so ended up cutting just a little of the original image away.  I coloured the eyes of the cat with  Spectrum Noir yellow and orange pencils and added some Glossy Accents on top, and I also coloured the flowers on the image with a pink Spectrum Noir to make them show up a bit more.

I embossed a background white layer using a piece of white card and a Tim Holtz Brick Wall Embossing Folder.  I then adhered this and the pink image mat to the base card.

I decided to use a frame which was left after I cut a stitched mat for my last project and so stuck it over the top of the image but as you can see instead of square on I twisted it.

I decided to add  a couple of corners and thought I would use a Memory Box die called Snowflake Corner
which actually looks like little flowers or stars and so doesn't necessarily have to be used for Christmas.  I cut two of these using a snippet of white card and decided to make them silver which I thought would go nicely with the pink.  To do this I used my Brilliance Platinum ink pad and just swiped it all over the die cuts until well covered.  This is a pigment ink so left them to dry for a little while, and to be sure I just went over them with my heat gun a few times.   I also stamped and cut out a couple of little butterflies, using another snippet of white card, with a freebie set I got with a magazine a little while ago which are actually Sheena Douglas designs.  I again used the Brilliance Platinum ink to stamp with and layered them up.  I also die cut a sentiment using a Britannia die and another snippet of white card which I coloured with the Adirondack Shell Pink ink.  I decided after I had cut it to darken the pink a bit with a Spectrum Noir Pencil

I finished by adding little pearls to the butterfly, the corners and on the larger flower on the image.

I have been away for a week and this was a scheduled post so have only today been able to link up to these challenges which means they are rather close to the finishing dates unfortunately.

P.S  I was tickled pink to be chosen as one of the runners-up over at Cuttlebug Mania.

I love your cute cat design, great stamp! The MB corners are beautiful, I have the same die :) Have a wonderful day, Shirleyxx

I love this cute cat image Pat, it's been on my wish list since I saw it advertised somewhere recently. You have made a lovely card, I like the the silver corners and the way you have offset the frame.
Jean x

So glad you had a wonderful break, and good to see this pretty card. The kitty's eyes really glow out of the soft pinkness. Really pretty with the smoosh technique. My trials with this have not resulted in such a wonderful background as this one either. Love the on-point square too, as it frames the image very nicely..love those stitchy dies. The corners worked very well too, as one doesn't pick up that it's snowflakes...blends beautifully with the flowers & flourishes. Good idea to use the brilliance inks to get the silvery look with the pinks. TFS & Hugs.

You linked it up o.k!! I love how you have framed the image and the added colour really helps. Thanks for joining TO

Beautiful card! I love the fact that your frames directs the viewer to the cat.

A delightfully pretty card Pat and perfect for our theme, many thanks for joining in at Stamping Sensations challenge.

What a lovely card, Pat. I love the image and the way you've put the frame at an angle looks so effective. xx

A gorgeous design! Love the soft colours. Thank you for sharing your lovely card with us at Stamping Sensations.

Such a pretty I age and lovely card! Thanks for taking the Time Out to play with us!

Very lovely card. Love this image and pretty die cut you used. Thank you for sharing your beautiful card with us at Stamping Sensation. I hope you join with us again in our new challenge.
Eret x