Hi all.  I made this card some time ago but for one reason or another never got round to blogging it.  I used one of the stamps from a set by Kanban call Damask Divas - Lets Do Lunch, which I was lucky enough to win over at Pixie's Playgrounds.  The backing card and teacup are elements from a set which I bought eons ago from Hunkydory. 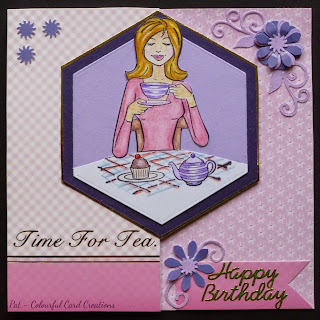 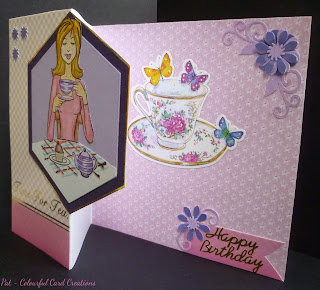 I started by folding back the front of a white square card and covered the folded back piece with one of the pieces of card which I thought was quite appropriate as the words went perfectly with the stamp, and then I covered the inside with another piece of the co-ordinating cardstock.

I used a snippet of white card and stamped the image using Black Archival ink and then coloured it using Spectrum Noir Pencils.  In the meantime I cut two hexagons from a set by XCut using two snipppets of plain card, one in dark blue and one in lilac.  I cut out and mounted the image on to the lilac hexagon so that it fitted flush with the bottom edge, and the only other thing I did was to cut a curve on to the table edge.  I then mounted the lilac layer on the the slightly larger dark blue layer and added another layer of gold mirri to the back of this, which I'm afraid doesn't show up very clearly in the photo.  I cut it by hand as I wanted just a narrow border.  I then fixed this to the card front.

I finished by adding one of the die cut images from the Hunkydory set to the inside of the card and then added some punched flowers and die cut swirls, cut to fit, and also three extra flower centres were added to the front lefthand corner of the card and the sentiment banner was cut from a leftover piece of  the pink border.

Thank you for visiting my blog today and your interest is greatly appreciated.

Lovely card Pat, a nice interesting fold, and pretty backing papers. The pretty teacup is perfect for inside and the punched flowers and swirls make lovey embellishments.
Jean x