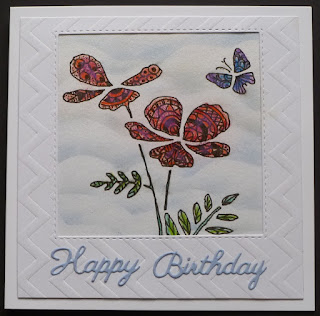 Wow Pat your zen tangling is fab. Love the colouring and those clouds are awesome. I rather like how the zigs go own the page too. Hugs Mrs A.

What a fun way to use a stencil, Pat - I love how it turned out! Thanks for joining us at the Simon Says Stamp Wednesday challenge!

Great zentangling, Pat! I love how you've created the clouds behind the image. Love design. xx

I love how you've used this stencil, Pat! I've yet to try zentangle but I sure love the looks of it!

What a brilliant idea! I love zentangling but not good at design, using a stencil is right up my street. Thank you for the inspiration.

Absolutely beautiful Pat! Way to go with the zentangling too. A super card all round.

Stunning work Pat and a gorgeous card with striking zentangling.
Thanks so much for sharing and taking part.
Sarah xx
Less is More

What a great idea to use a stencil to produce your zentagling. And great use of the chevron frame too.
Thanks for sharing with us.
Anita x
Less is More

This is simply brilliant! Had not thought of trying the Zens with open designs as you've done here. It looks great to me (as you will remember I can't Zentangle either!) Your designs in the petals look very pretty and adding in the SN's enhanced it very well. This made up into a lovely card, with the additional of the frame. Well DONE! TFS & Happy Sunday

so pretty....something I really want to try out...

This is a lovely card Pat. I really like the sky behind your zentangle. Barbxx