Hi there.  I made this birthday card for a nephew but hope he feels it is masculine enough as after I had finished, although I love the colours, I did wonder if it would have been better if they were darker.  I have made it with the Happy Little Stampers March CAS Challenge in mind which has asked that we use a faux mother of pearl technique which involves using a Pearl PVA or something similar which has mica in it and using a piece of scrunched up cling film dabbing it onto the card and when dry adding inks.  I added my inks by smooshing and the lovely pearl shine shows through beautifully.

The idea for the card came after visiting The Muse Challenge and seeing this featured muse card by Michelle Ferguson, but as that particular challenge has finished you will find the card on her blog here. Instead of a slope I made mine a curve and used a Happy Birthday Script die by Sue Wilson, but using the embedded die technique in a similar fashion. 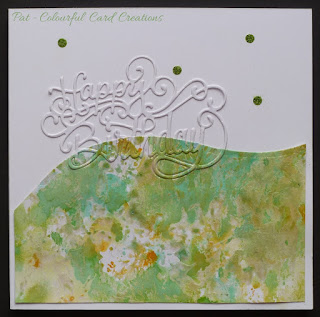 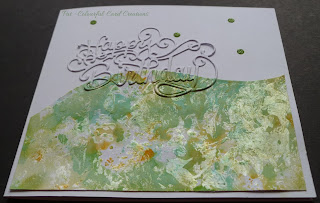 As explained above I smooshed the snippet of white card, which I had first randomly covered with the Cosmic Shimmer Pearl PVA, with Distress Inks in Peacock Feathers, Mowed Lawn and Spiced Marmalade.  I then cut the curved shape using a Spellbinders Curved Borders One set of dies.

I then cut the Sue Wilson Scripted Happy Birthday,  just the bottom half, out of the smooshed snippet, making sure to keep all the little pieces to put back into place.  I placed a piece of the Stick It adhesive on the back of the piece of card where I new I would be cutting it to make it easier to stick the pieces back.  I then cut the die again out of another snippet of white card which again I backed with the Stick It adhesive.

To finish I adhered the curved section to the white base card and then placed the white Happy Birthday into the negative space followed by the smooshed card pieces over the top, filling in the gaps with all the little pieces to restore the curved shape as seen above.

Lastly I found some little white sticker dots which I coloured in a dark green Promarker and then stuck them in to place to give the white space at the top of the card a little more interest.

I was pleased with the final result but I notice that the bottom of the curved piece does not appear to have stuck as well as I had thought although I did use double sided tape which normally sticks very firmly.   I photographed and sent it out in the post the other day and to the naked eye it appeared to be fine but in close up it doesn't look quite so tidy.

Thank you so much for stopping to take a look today.

Pixie's Crafty Workshop - Week 221 where we are asked to use up our snippets.

A lovely card Pat! Such wonderful shades of green there too!

I've not tried the faux mother of pearl technique Pat but it sound fun and your card looks lovely. I love the colour and sure your nephew will be delighted with it. Wishing you a very Happy Easter. Barbxx

This is a great card Pat! I've been 'smooshing' again too today - thunder and lightning means no ironing 'cos the iron might blow up.... well my reasoning anyway! Happy Easter! x

I think this card would work great for either gender. I LOVE your curved smooshing too, the colors you used to smoosh look splendid together. Especially awesome is the way you've inlaid the sentiment in the 2 colors. Most impressive. Another stunner from you! Hope your day has been a good one, and perhaps you're not having the heavy rains I'm reading about on so many of the UK blogs. TFS & Hugs

Gorgeous colours in your faux MoP panel, Pat ... and such delicious shimmer ... love the camoflaged die cut set into it! Thanks so much for playing along with us at Happy Little Stampers! Anita :)

Such a beautiful technique Par...love the colors too
Ps : I am having a celebration on my blog with prizes...would love to have you join in.Here is the link : 5 Million Page-views Celebration

Your faux MoP panel looks gorgeous, Pat and the sentiment die you used is just wonderful!!!!! I think this card is definitely fit for a man - the colours are just fine and surely your nephew loved it!!!! Beautifully done!!!
Have a wonderful day!!!!
Hugz

I also think your card is great for either gender. The inkiness looks beautiful. I've been away so just catching up. Take care, Shirleyxx