Hi everybody.  I have used this technique quite a few times now and really like it.  I had a couple of male birthday cards to make and as a bit short on time I had decided to do two the same, but then at the last minute changed the second one slightly. 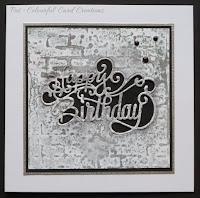 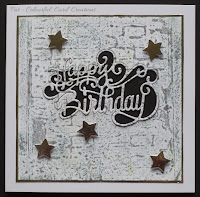 Both cards use the Sizzix Embossing Folder Bricked which comes as a pair with a Woodgrain one.
I layed the folder out flat and inked the inside of the front of it using Memento London Fog ink, and then spritzed it a little before laying a snippet of white card over it and pressing firmly before lifting it away.  I used a Sue Wilson large Happy Birthday and die cut this inked piece of card using the Stick It adhesive.  As this is quite expensive I economised by just backing the area where the sentiment would be cut out.  I matted the negative shape with a snippet of black card and then adhered this to a piece of silver mirri card on the left hand one, and on the one on the right I left the inked layer larger so only matted on to black.

The left hand card I continued by cutting another sentiment from a snippet of white card again backed with Stick It adhesive,  and this was stuck to the underside of the original sentiment cut from the inked piece, and then I placed this back into the negative space and the extra layer makes it stand out better.  I decided that the sentiment edges were a little difficult to see on this one so when cutting the under layer for the right hand card I used a snippet of black card instead, and I think when comparing the two the black card makes the letters stand out better.

I finished the left hand card with three enamel dots, and the right hand one with some Xcut Nesting Stars.

Pixie's Crafty Workshop - Week 224 where we use up our snippets.
Simon Says Wednesday Challenge - Happy Birthday (they are 7 years old).

Fabulous cards Pat and a great technique too. I've inked and then run folders through the Cuttlebug but never thought to just do what you did, so effective as well with a nice flat surface to adhere the sentiment onto. I hear you about the Stick It adhesive sheets being expensive! I hang onto every little piece (just keep them in the front of the packet) and often the back of the piece of card I intend to cut is a real patchwork quilt of butted up snippets of adhesive sheet. We crafters can be very frugal - it leaves more pennies for other things!

Thanks for coming to play this week!

Hi Pat, they are two lovely cards. A really interesting technique which I'm going to try. Thanks for sharing. Barbxx

Two lovely cards Pat and black and white together is just stunning..

This makes a great birthday design, Pat! Thanks for playing along with us at the Simon Says Stamp Wednesday challenge!

The embossing folder stamping is such a great technique. Looks amazing done in gray with the brick folder. Perfect for a masculine card. Great job with the inlaid die-cut ... awesome with the black background. xx

Oh, I love your wonderful bg's and how you've inlaid the black pieces of the sentiment die, Pat!!! I'm trying to decide which of the two I like best, but it's so difficult to pick - I think the one on the left with the slightly bigger frame on the outside gets my vote, but I do love the stars on the other one, too!!! Oh, well, just have to say then that they are both beautiful, hey!!!! So lovely - I have to try that technique some time!!!
Have a great day!!!
Hugz

These are just stunning and so dramatic in the colors. You are amazing at your deft touch with this technique, and with the delicacy of the letter shapes, you've got them just perfect. I like the idea of spritzing the inked folder first, must remember that excellent tip! Good for you at having 2 beautiful cards all at the ready! TFS & Hugs

You are a pro at this technique, Pat! That e/f is a perfect choice for this type of thing and your cards turned out to be stunning!! Thanks for the tip; this technique has never gone well for me before, so I will try this again!! Enjoy your day! Hugs, Darnell