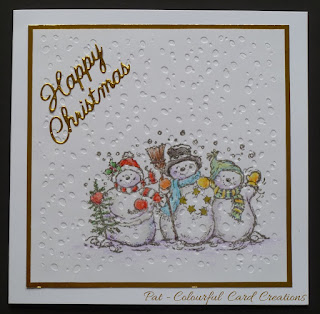 A fabulous card - I love the snowman trio and wouldn't have noticed the snowflakes if you hadn't mentioned them! Thank you for joining us at the Rudolph Day challenge and good luck!
Kath x

This is so sweet! Lovin those snowmen and I like your embossed snow!

Thanks for taking part in the June Rudolph Days Challenge.

Beautiful Christmas card, the embossed background is perfect for the snowmen. I usually get started on Christmas by now, I'm going to fall behind this year... Cheers xx

Great card, Pat, with a really cute image. Love the embossing. I keep zooming in and out on the photos and the embossing still looks like it's coming out and not going in.......and they say the camera never lies! LOL! xx

.....I forgot to say that I'm visiting with my Rudolph Days DT member's hat on. Thanks for joining in the challenge this month. Good Luck!

Must admit I like your embossing this way round on your card. I think you would loose done of the snow men's definition the other way. Hugs Mrs A.

Actually the debossed side of the EF looks Great! Sometimes accidents have a happy ending, and this one sure did. (same thing happened to me recently..and I liked the debossed side better). These are adorable little snowies and your pencil coloring is so pretty. The mirror mats look very nice with the snowie colors, and that sentiment is so perfect, at first thought it was a sticker. Sometimes that mirror is hard to cut with the skinny letters. Beautiful card. TFS & Hugs

I love snowmen on Christmas cards Pat and these snowmen are gorgeous.

Your snow looks just fine the 'wrong way round', Pat!!! And your little snowmen are so adorable!!! What a sweet Christmas card!!!!
Have a great day!!!
Hugz

I wouldn't have noticed if you hadn't said!
Cute snowmen and a great card Pat. x

Great card and even this small mistake will not change that.
hugs,
BozenA

I am always losing things, thought it was just me.
Fabulous card, great image and a lovely wrong way round EF, lol.
When I make mistakes one way or another I make sure I send them to people with bad eyesight.

Love the cute snowmen and your snowy background