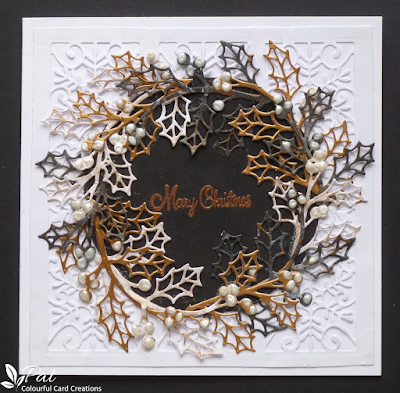 An absolutely stunning card Pat. The dies are all so pretty and I love the colours of the holly leaves. What a lovely selection of colours you achieved with the marbling and painting. I love the PVA pearls. LOVE it! I hate it when the clocks change too Pat. Barbxx

Gorgeous card Pat! I love the colours on the wreath against the white background, the whole design is stunning! LOVE it :-)

Fabulous card Pat! The wreath against the snowflakes is gorgeous and I so love the colour combination you used!

I DO like these non-traditional colors. This looks very 'natural' and wintery, and I expect the colors would be right at home in the wilds of the forest too. Love these dies and the way you've designed this gorgeous card using them. So pretty. TFS & Happy wkend.

Classy looking card, I like the colours you used for the lovely wreath.
I hate the thought of short afternoons when the clocks change too.
Jean x

Wow I do so like your alternative colourway. The wreath design is lovely. I hate the early nights as I love being out in the garden for as long as possible. hugs Mrs A.

I missed a lot of your beautiful creations , sorry for that, but now I see so much beautiful artworks , I really enjoy running through your blog , so many wonderful creations, so much art to enjoy , the chistmas card looks wonderful , I love the colours and the way you created it!!

Beautiful colors you've chose for your card! Love the dies you've used to make this beautiful card! Thanks for playing with us at HLS!

Pat, such a gorgeous wreath!! Love the non-traditional browns and golds. Just a gorgeous card,and love the embossing. Thanks so much for playing along with us at HLS Christmas Challenge.

Oh wow -this wreath is simply gorgeous! Thanks for playing with us at HLS!

This is such an elegant wreath, Pat! Love the texture in the background too!

Gorgeous and elegant design, I love how you created a wreath with the holly flourish. The snowflakes behind are beautiful as well. Take care, Shirleyxx

Pat, this is beautiful and elegant. LOVE the wreath the most :)