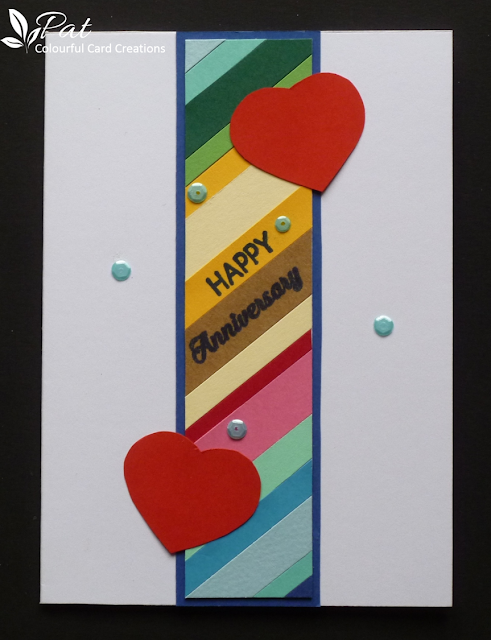 Beautiful, bright and cheerful card! Thanks so much for joining us at Freshly Made Sketches.

Fabulous card Pat, it's a great design and the colours are wonderful, not too fussy a designed for those folk who don't want much detail, I love it Kate x

A wonderful take on our stripe challenge pat and you've worked Jennifer's technique perfectly! I watched that video too but still to try it out! Love your fun colour combo; so bright and cheerful. Thanks for playing along at Less is More this week x

Beautifully vibrant stripy card Pat. The rainbow colours really have an impact and the design you chose really work well for that technique. I hadn't seen this video so was really interested to see how Jennifer did her cards as I made one 3 weeks ago in muted colours for my dt cards. Thanks so much for sharing the link - I didn't think of using a paper shredder! Anyway, thanks so much for sharing this with us at Less is More xx

Very fun take on the sketch!

AS soon as I saw this card Pat, I just knew you had seen Jennifer's video! I watched that one too (she really does come up with some great ideas, doesn't she?) You have done a great job here and, as you say, something different from the norm. I know the recipients will just LOVE it! Have a fabulous week my friend! Luv & Hugs. Hazel xx
My Card Attic

very nice, when i sqaw the photo I knew which video you've seen ;-) worked out great and good fun using up scraps

This is terrif Pat! Great centre panel and a design that can be used for everything! x

Fabulous bright and beautiful colours Pat. I love the design, it makes a great anniversary card and would be good for other occasions too.
Jean x

Your bright and cheerful Anniversary card is just wonderful, Pat. I love the added hearts and sequins too. What a great way to use snippets for the stripes. TFS...Hugs...

Very cheerful and CAS Anniversary card, Pat! I want to try that technique sometime, too! It would be a great way to use up the scrap papers or even my pattern papers :)!

Bright, bold and beautiful! Fab use of stripes and a super take on our stripes challenge! Thanks so much for playing along with us at Less is More :)

A really brightly coloured card Pat, I love the sketch you have used.
Janice x

I love this Pat and will check out Jennifer's video for more info! The bright colours are so eye catching and you have combined challenges perfectly with this design. Great to see you at Less is More this week :)

Brilliant card, Pat. At first glance, I thought you'd used a piece of striped patterned paper. What a great way of using up your snippets! xx