Hi everybody.  This is another card using the 3D Pretty Poinsettia Embossing folder which I got recently, but this time using parchment to emboss with.  I decided to make three more cards with snippets of red, blue and green using this embossing folder, but then thought I would try parchment.  I decided after embossing the snippet of parchment that the flowers needed to be emphasised a bit more so I used a ball tool to go round them to give a whiter edge, and then I used the red embossed snippet underneath which gave it a soft pink colour. 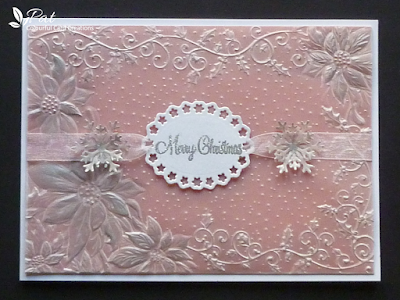 In order not to have any glue showing on the front I embossed it with a border on two of the sides which would wrap round the red card before being adhered to the base card.

I then decided to cut a sentiment mat from a snippet of white pearlised card and secured this across the card  mounted on to two pieces of ribbon.  I found my Spellbinder Nestibilities die called Floral Oval which has little star shaped holes when die cut, and the sheer sparkly ribbon fitted through the holes on either side of the sentiment plate and secured to the underside of it, and I then cut each piece long enough to wrap over the card and secured it at the back.  Before sticking the ribbon to the mat I stamped a sentiment with Versamark Ink and heat embossed with WOW Silver Glitter Embossing Powder.

I cut  the white base card down so the embossed piece would fit with just a narrow border and then added the parchment topper to it.  I thought perhaps it needed something else so I cut four parchment snowflakes from snippets I found, two small and two medium, and added some silver gilding wax to highlight them, and after mounting a medium one with a small one on top I put one of these each side of the sentiment.  I also decided as an afterthought to add some of the silver gilding wax on to the parchment which I did very carefully as I didn't want to get any on to the base card.  Luckily it worked. Here is the second card with the embossing also highlighted with silver gilding wax.  I cut some leaves with a pair of dies by Sue Wilson called Delicate Fronds using some more snippets of parchment and cut them into pieces, highlighted them with the silver gilding wax and made the wreath shape, after which I added the sentiment using a snippet of silver mirri card. 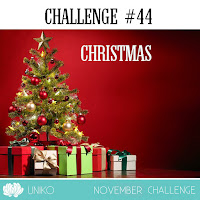 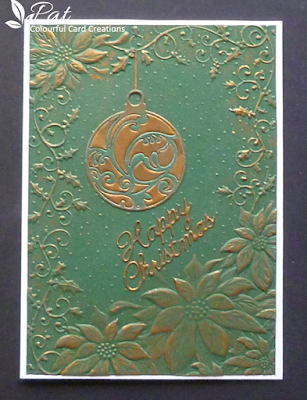 For this last card I used copper gilding wax to highlight, and cut a bauble using a freebie Crafters Companion die which I got with a magazine several years ago.  I cut it from another snippet of green card and removed the pieces.  I used the same gilding wax to colour the edge of the bauble and all the pieces.  I should have adhered it to a piece of Stick It adhesive and then die cut it but I managed to remove the top protective layer and laid the bauble down onto it and cut round the edge.  A bit fiddly but I managed it.  I then fitted all the pieces back into the bauble, removed the backing and mounted it on to the embossed background.  I finished by adding a die cut sentiment cut from another snippet of green card which I then coloured with the gilding wax so that it would all match in.  For the hanger I coloured another small snippet of green card with the gilding wax and cut a very thin sliver long enough to hang down from the holly above.

Before I finish I would like to introduce a new follower called Sylvia whose blog you will find here and who makes some really beautiful cards, and I'm sure she would love you to go and take a look.

Thank you for looking at my blog today and I'll see you again soon.

Hello Pat, what a wonderful selection of cards, all beautifully desined, I especially love your parchment card, so delecate and stylish, Kate x

Stunning cards - the parchment has given them a very elegant look.

Three gorgeous cards, Pat, this really is a lovely embossing folder. I love the effect of the parchment, it give the card an almost vintage look. The gilding wax you've used gives a beautiful effective on the embossed design. xx

Wonderful cards Pat. Your snippets entry is so lovely and what a great discovery that the die has stars cut out from it - perfect for Christmas sentiments, I've got that same set and never even noticed. Love the soft pink look to the parchment and what a versatile folder as well.

Wow gorgeous and elegant designs, the embossed parchment is beautiful. I hope you are enjoying the season :) xx

Very pretty in the blues. Thanks for joining in with the Uniko Challenge.

Gosh that embossing folder is amazing and absolutely stunning! Great how you've used it and used different mediums and techniques to hi-light the poinsettia...Fabulous! x

These cards are very beautiful and I like all the colour ways. The vellum is very delicate and frosty looking. I'll have to try this. Thanks for playing along at Christmas Card Throwdown.

And the HLS Christmas Challenge.

Love how you've made the flowers pop even more with your ball tool, Pat!!!! The red underneath gives a beautiful pink colour!!!! Your cards are all so elegant!!!
Hugz

Wow! They are all so beautiful! So much depth and richness of colour. Thank you so much for playing along with our challenge at Uniko. Deborah, DT.

Wow, now with parchment! All three of them are stunning, Pat! The silver and copper gilding wax worked so well to highlight the embossed delicate flowers! Love the details you took care of. Happy holidays! Hideko xx

Sorry, I'm so late visiting Pat my friend! I have always loved the look of parchment craft, but never tried it! Yours are so stunning, I must give it a go one day when I have more time! Thank you for your continued support my friend! Have a great Christmas and a good year in 2018! Love & Hugs. Hazel xx
My Card Attic

WOW!! Gorgeous cards Pat. LOVE you beautiful embossing folder. It is amazing ... especially done with the vellum. Great shaping with the stylus to make those poinsettias pop even more. And the gilding wax really adds a special touch. All three are beautiful and so elegant. Great design, Pat!! xx

These are gorgeous, Pat. I like the softness of colour in all three and the beautiful texture of the embossing folder.

Pat, each one is lovely! The stylus embossing added so much more detail and dimension(especially #1) and that was the perfect tag label to use just now for the sentiment. Love the delicacy of the soft color on #1. Love the white wreath on #2, and what a difference the color made to the design. But #3, with the green and copper gilding, now that is awesome. Again, the focal image with the swirls of gleaming copper was just a real WOW! TFS & Merry Christmas. Best wishes for a wonderful 2018.

What wonderful projects, so classic, I love them! Thanks so much for joining us at Country View Challenges this month - good luck and hope to see you again Teresa DT xx

WOW! A beautiful set of cards. I love how you added details in the first tab. VVellum looks so delicate.
Thank you for joining us at Happy Little Stampers CAS.
Regards, BożenA DT HLS.

Thank you for participating in the HLS Christmas game.
hugs,
BożenA DT HLS :-)

A trio of gorgeous cards! The parchment is lovely and oh, what a special added touch the gilding wax gives! Thank you for sharing your artistry in the UNIKO gallery!
~carol

WOW! These are stunning and I bet the recipients thought so too. Wonderful technique and so much beautiful details. Thanks so much for joining in at Uniko and my sincere apologies for my late commenting :( Happy 2018! Hugs Bev x