Hi there.  Here are the 'hybrid' cards I was talking about on my last post.  I found a bag full of card fronts and some focal images off some cards which I think one of my friends gave to me and which I had put at the back of the cupboard.  I was in need of some quick cards and so I picked out some of these and added some bits of my own to embellish and was pleased that at least I have recycled some bits which would otherwise have been thrown away. 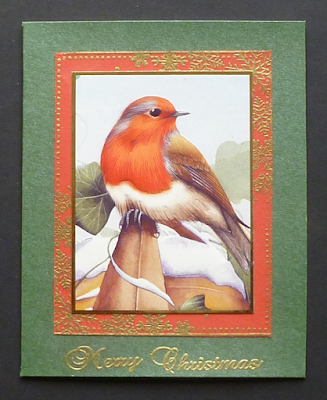 This first robin caught my eye straight away so I added the stamped NBUS Phill Martin Snowflakes Large Rectangle Frame using Versamark Ink and WOW Metallic Gold Embossing Powder on to some red card and then mounted it on to a green base card, some leftovers from ages ago.  I finished with the gold embossed sentiment. 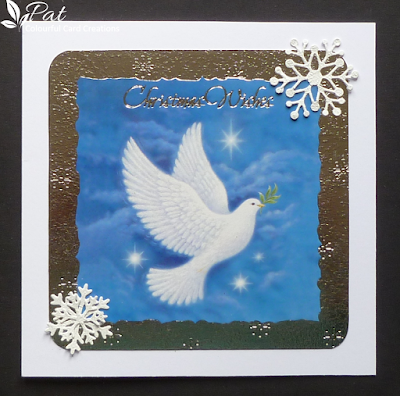 This dove was extremely simple, I just mounted it on to a white 6" square base card and added the two die cut snowflakes which I cut from a piece of white card which I had heat embossed with WOW Sparkling Snow EP.  The smaller snowflake, bottom left consists of two snowflakes. 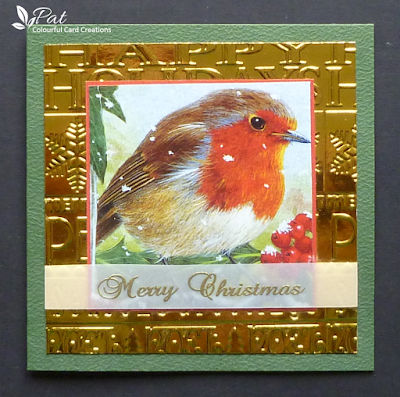 The robin I matted on to red card and then embossed using a Cuttlebug folder I got many years ago which I managed to run through again and make square, on to some gold mirri, and then before mounting on to the green base card I cut a strip of vellum and gold heat embossed the sentiment then wrapped it round the topper. 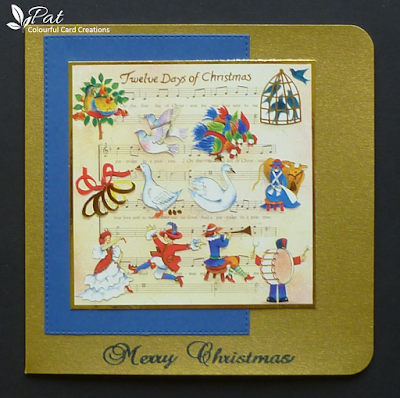 This last one I didn't mount on to anything as it already had a gold edge.  I cut the blue card using a Crealies Pierced Rectangle die and stamped the sentiment using Versafine Majestic Blue ink which I then heat embossed with WOW Clear Gloss EP.  This gold base card had become a bit chewed up on the edges as it had been laying in the cupboard for some time so I used a corner rounder punch.

Thank you for looking at my blog today and I hope to see you again soon.

Great upcycling Pat! Sorry I haven't been around in a while . . . mum keeps me very busy! I hope to do better in 2018! All good intentions anyway! I hope you had a good Christmas and that 2018 will be a happy and - above all - healthy one! Love & Hugs. Hazel xx
My Card Attic

Terrific bit of recycling Pat. I say I am going to do it but hardly ever do - MUST TRY HARDER!!! LOL
Happy New Year. x

Absolutely beautiful cards Pat, marvellous upcycling, every year I save some cards to redesign them and never do, thanks for the inspiration, Kate x

Great and creative recycling, Pat, WTG on the NBUS issue too AND you have the added bonus of getting a headstart on your Christmas 2018 quota - YAY!

Your recycled cards are beautiful Pat. I especially like the robins. Some of the shop bought cards have such lovely pictures and it is good to be able to reuse them, and with the help of modern dies and stamps it possible to remodel them into really beautiful cards like yours. I am planning to do some more myself in the coming year.
Jean x

I recycle as many shop bought cards that we receive as much as possible. Most of them do deserve a second outing. I especially like the robin cards here. Hope you will have a Happy and Crafty 2018. Hugs Mrs A.

Your cards are lovely Pat and think it’s a great idea to recycle old Christmas cards, especially when you need cards in a hurry. The small touches like adding a die cut or a handmade sentiment makes all the difference and will be really appreciated by the recipient. I hope you had a lovely Christmas and I wish you all the best in 2018. I’m looking forward to seeing more of you wonderful creations next year. Crafty hugs, Sandra x

This is very inspiring, Pat! You did a brilliant job of upcycling your cards and showing us how gorgeous they can be! I do this, too, for my donated cards and appreciate these design ideas!! Happy New Year Hugs, Darnell

Great recycling, Pat, your cards are beautiful and the images certainly needed to be reused. I managed to recycle a few for this Christmas, but you've inspired my do more in 2018. xx

I so enjoy all your creations, Pat! Even your recycles are beautiful! Wishing you a happy, healthy and creative New Year!