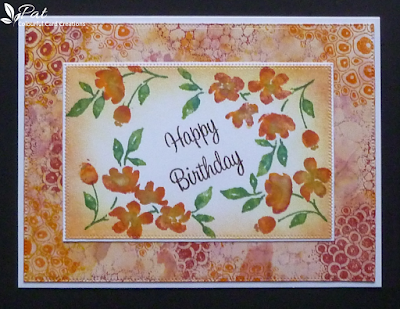 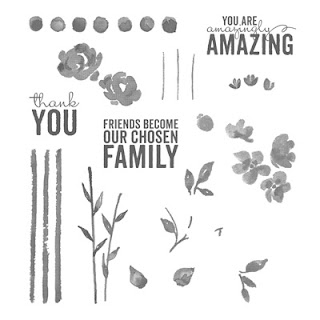 OMGosh, Pat, the background is just amazing! I love the colours. The flowers make a beautiful border around the sentiment. Stunning card! xx

I agree with Liz, your background is so amazing. so much fun finding stuff you did a long time ago and such a great stamp set.

WOW! Those stamps you've used in the background are amazing. Just checked out the sight and watched a video on them. They are so unique. I've never seen anything like them. Beautiful card Pat. I believe I have that same SU! set but haven't inked it up yet. :) xx

What a super creation for our 'Something New' theme at Penny Black and More challenge Pat. It's always fun using the 'mop up's' as you never quite now what you will end up with and love the colours and CB background stamping here. Many thanks for joining in.

This is so beautiful Pat, you are so right about the background stamps, they are a super addition. I love your colours and the pretty floral images, gorgeous card, Kate x

So enjoyed reading how you made this stunning card. What a fabulous and unique background...love it. Great colour combination and those flowers are so pretty. So glad you mastered how to put them together as your card is stunning! x

Such a gorgeous card! I love the background and it complements the stamps you've used perfectly, April x

So happy you saved this piece to turn it into a smashing card! Love that background, so much color & texture. I also think your white rectangle looks just fine. A great use of the SU floral set, and your color choices just made me feel warm and happy on a chilly rainy evening! Good job and I am delighted this was a Playground win that you got to enjoy! Congratulations on that win. TFS & Hugs.

What a great card Pat! x

Stunning card ! lovely ! Thank you so much for sharing your work with us at The Artistic Stamper
WIshing you good luck to win beautiful stamps !

Gorgeous card Pat - and the background stamps are utterly 'I must have-able!!'. Love your flowers and did have a giggle about you snipping them apart - but you managed just fine regardless! Lovely colours you used too.

Fab use of your mop ups and love those colours.
Thanks so much for sharing with us at Penny Black & More.
Lynn x
DT

What a fabulous use of mop up paper Pat! You are so inventive! I LOVE the background piece you have made and the focal image with the beautiful blending around the perimeter and those pretty flowers, all add up to the most gorgeous design! You always come up with such interesting techniques! Have a great week my friend! Luv & Hugs. Hazel xx
My Card Attic

Your background of the focal panel looks fabulous together! Thanks for joining in at STB!!

Your waste made a beautiful background Pat. I love the colours and the flower border framing the sentiment looks great too. A very pretty card. Barbxx

Wonderful card! Thanks for joining us at Penny Black & More and good luck!
x Daniela (DT)

WELL DONE on your win over at the playground