Hi there everybody.  This is a card I made for my brother-in-law who has one of those more significant birthdays to celebrate, today actually, hopefully he will have received the card, and anyway he doesn't look at my blog so it's safe to show it.  He is a very keen walker so I thought this Sheena Douglass A Little Bit Sketchy stamp called Across the Fence would be a good one to use. 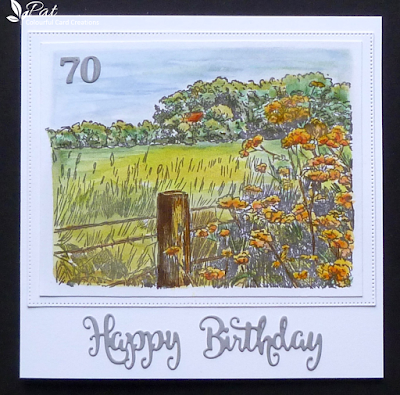 I cut a piece of white card roughly 6" square and stamped the image using Versafine Smokey Gray Ink.  I then coloured it using a variety of Distress Inks and a waterbrush.

I cut the image back and mounted it on to another piece of white card which had been cut with a Crealies Pierced Rectangle die.

I finished by adding the sentiment and the numbers which I die cut from white card and then coloured with Hickory Smoke Distress Ink.  For small items like sentiments and numbers I have got into the habit of using a dryish wet wipe wrapped round my finger (I used one that had been sitting on my table for a while) which makes it easier to get into all the little areas and seems to help get smooth coverage.   I then mounted it on to a 6" square white card.


In case you wonder what that orangy red blob is amongst the trees, it is the roof of a house.  I made it quite bright because I thought if it was more slate coloured it might be a bit difficult to see.

Thanks for dropping by today and I'll see you again soon.

Simon Says Monday Challenge - Time Out (who wouldn't love to take some 'time out' walking through this beautiful countryside).
Seize the Birthday - Anything Goes.

perfect image for someone who loves walking, beautiful watercolouring.

Gorgeous card, Pat. The lovely scene is beautifully coloured. Thanks for the tip about using the dryish wet wipe for colouring small die cuts. xx

A stunning scene Pat, I love the colours that you’ve used, especially the use of orange on the flowers in the foreground. I’m sure that your Brother-In- Law will treasure this card. Wishing you a happy and colourful weekend. Crafty hugs, Sandra x

This is a stunning card Pat, I love the scene, look a love place to walk, and your colouring is brilliant, just perfect for your BiL being a walker. Have a lovely holiday weekend, Kate x

What a fabulous stamp and such an atmospheric card. Love the sweet colouring and the grey stamping. Thank you for the tip about the dryish baby wipe x

This scene looks like a great walker for a hiker. It is such a pretty scene.,,a great stamp!

Fabulous card! the scene is stunning as is your coloring with distress! totally impressed and I am sure your BIL will LOVE this card! thank you for joining us at Seize the Birthday!

I love your natural scene cards!!! Beautifully colored as always! It was a good idea to color the white die cut sentiment in Hickory Smoke! Very elegant! Wishing you a wonderful week, Pat!

What a wonderful Birthday card! love your coloring, amazing! Thanks for joining us this week on Simon Says Stamp Monday Challenge Blog! barbara

What a gorgeous countryside scene Pat. Your colouring is amazing. Your BIL will love this card! xx

Beautiful scene and lovely colouring, Pat. I really like the colour scheme you chose.