Hi there everybody.  Here are three cards I made for the Chocolate Baroque shows on the TV in August featuring these three sets of Indian themed stamps.  I usually show them at the end of the month but I ran out of time, so here they are now. 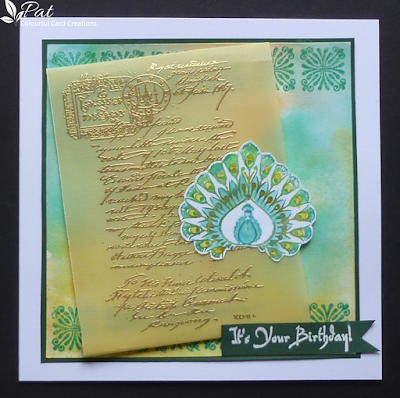 For this first card I started with the background using my gelli plate and three colours of Distress Inks, Cracked Pistachio, Fossilised Amber and Carved Pumpkin.  I did want the yellow more to the bottom and the green and orange over the rest so laid the inks down with this in mind, although the results are always random, and I find the gelli plate seems to mix the inks much better for me.  I also spritzed before laying the card over and rubbing it well before lifting.  I finished the background by adding this little square stamp from Paisley Elephant across the top and bottom to make a border using the Cracked Pistachio.

I then found a piece of yellow parchment and heat embossed the script from the same set on to it using Versamark Ink and WOW Gold Metallic Embossing Powder.  I cut it out and the rolled the bottom and the top to make a sort of scroll, although there was much more parchment to roll at the bottom than the top, but it gives it the look.

I added the peacock from Indian Textiles and inked it using my Misti with the Cracked Pistachio first, and spritzed before stamping, then again with the Carved Pumpking around the middle section, spritzing lightly again before stamping, then I coloured the outer feathers with some of the Fossilised Amber and the peacock body with Peacock Feathers.  I then cut it out leaving a slight white border.

I finished by layering it up on to a dark green mat, then added the parchment and peacock and finished by stamping one of the sentiments from Elephant Paisley and heat embossed using Versamark and the WOW Opaque Bright White EP, and I made a fishtail banner and added it to the card. 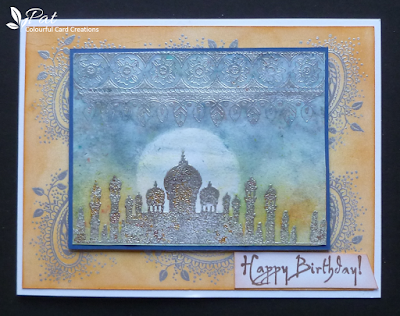 Here I started with a white rectangle and stamped the minarets from Indian Textiles and the lacy border from the same set using Versamark and WOW Silver Metallic Embossing Powder.  I did try using some gilding flakes with WOW Bonding Powder over the Minaret image using my Misti, and they did stick rather randomly, so you can see little patches of gold flakes, and then I went over it again with the Versamark and stamped again using the WOW Silver Metallic EP.  I then placed a mask for the moon and applied some Black Brusho Powder which has quite a lot of other colours within it, and also some Turquoise, and some bits of Lemon and Orange near the horizon.  I did use quite a lot of water as I didn't want the background too dark.  I removed the mask and dusted some Hickory Smoke Distress Ink over the face of the moon using a blending tool, and also a very little Fossilised Amber.  I layered this on to a piee of dark blue card.

For the background I heat embossed on to white card using an image from Elephant Paisley, with the same WOW Silver EP.  I then applied some Carved Pumpkin again using the blending tool.  I then put it together and added a white strip with a sentiment from the set using Versafine Vintage Sepia Ink and blended a little more of the same ink around the edges before adhering it to the card. 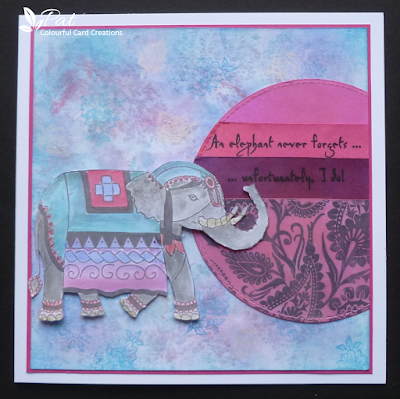 On this last card I started with the background.  Using the splash technique I used Salty Ocean and Worn Lipstick Distress Oxide Inks, and also some Shaded Lilace Distress Ink.  I  added one of the images from Nature's Paisleys using the Worn Lipstick and also added some stamping using two smaller stamps from the Indian Textiles set with Salty Ocean Oxide both second generation stamping, and Brilliance Moonlight White for the other.  I then die cut a stitched circle using a set of dies from The Works, and cut it in half and one half into three.  I applied inks going from dark to light and blending several colours of pink and purple to get the colours I wanted.  I then stamped one of the sentiments from the set on to two of the strips and using the damask type pattern on the bottom half and then coloured with again several colours of pink to match the top half.  I glued the circle over the edge of the background and the added a bright pink mat behind it.

I stamped the large elephant on to a piece of white card and coloured with my Distress Inks using a paintbrush and some water and fussy cut it out.  After adhering the background to the card I added the elephant using Pinflair Glue Gel to give it dimension.

Thank you for looking at my blog today, and I hope to see you again soon.

3 fab cards Pat, but simply adore the first one. The gold embossing on the vellum is awesome! x

Wow, three stunning cards, Pat! I love the colours and how you used the stamps, amazing designs.

Such a selection of loveliness, Pat, liking the animal images you've used and the lovely jewel tones too. You know? I NEVER think to use vellum but ... great job!

What a lovely array of cards Pat!! I particularly love that first one with the beautiful BG and the gold embossing! Wishing you a lovely day...

Wow what stunning cards, all three of them and fabulous inspiration.....Thank you x.

Three fabulous cards, Pat. I love the designs and the colours are beautiful. xx

Three smashing cards Pat. I love the gold embossing against the yellow parchment and the background colours that you’ve used compliment it perfectly. The colours on your second card co-ordinate beautifully, and once again, the silver embossing adds a touch of elegance, great stamping too. The background is wonderful on your third card and the Elephant looks terrific. You’ve done a fabulous with the CB stamps Pat x