Hi there everyone.  I had a card to make for a lovely friend whose birthday it is so I thought I would get out my Aall and Create Set again which has  several different flowers and some sentiments which is called Eclectic Stems (No. 199). 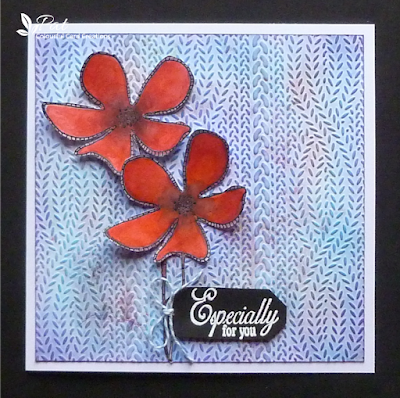 I used the large flower which reminds me of a quirky poppy and stamped it twice on to a piece of white card using Versafine Clair Nocturne ink and then heat embossed with WOW Clear Gloss Embossing Powder.  I then fussy cut both flowers out and coloured with my Distress Inks using Candied Apple, Ripe Persimmon and Black Soot using a waterbrush.

I then made the background.  I had a piece of card which I had been using some inks on when making some backgrounds but wasn't in love with this particular one, so I turned it over and decided to use the back which had the meerest hint in places of orange which I thought would go with what I was planning.  I then used an embossing folder called Cable Knit by XCut, but I have had it so long I don't think you can get it any more.  I then inked this with some Salty Ocean DI and then added some Wilted Violet and Dusty Concord to break it up a bit and darkened the edges too which makes it pop a bit when added to the card.

I finished by making a sentiment tag from a piece of black card and white heat embossed the sentiment with WOW Opaque Bright White EP, and to this I added a piece of blue baker's twine tied into a bow.

I want to thank you for visiting me and I hope to see you again soon.

A fabulous card and I love the flower stamp you've used - beautiful colours on the card too.
Kath x

I'm sure your friend loved her card Pat it beautiful

Hello Pat, your card is so pretty, love your flowers and their wonderful colours. Now I have the EF and never used it, but you've just inspired me to give it a go, it's a fabulous design. I'm sure your friend will love her card, Kate x

Loving the textural and wonderful background for those contemporary flowers to sit on. Great texture and those flowers look stunning x.

love the effect of that cable knit EF, so much texture for your delicate flowers :)

Instant LOVE!!! The colorcombo is one of my favourites and those flowers and background are so beautiful!

A great card Pat and I adore the background, that's a super EF. I love you've fussy cut the flowers and the way that they really pop of the page, it's a great card x