Hi everyone.  Here are the cards I made for the December Chocolate Baroque shows on Hochanda. 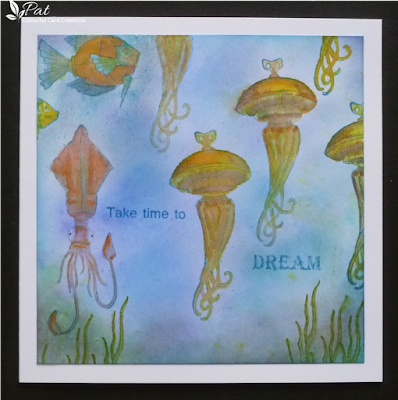 My first card was made using the Steampunk Sea World and the Steampunk Funky Fish stamps.  I started with the background using some Brushos in Turquoise and Ultramarine and a bit of Dark Brown at the bottom, keeping it fairly light.  I then stamped the images using Versafine Deep Lagoon ink second generation, as I didn't want the outlines to be too heavy.  I then coloured them using a selection of Distress Inks applied with a waterbrush - Ripe Persimmon, Mustard Seed, Salty Ocean and Peeled Paint.  I then added some extra ink to the background and around the edges to darken it a bit using more Salty Ocean and Dusty Concord and then added the sentiment from Punky Expressions stamped with Versafine Deep Lagoon again using second generation ink. 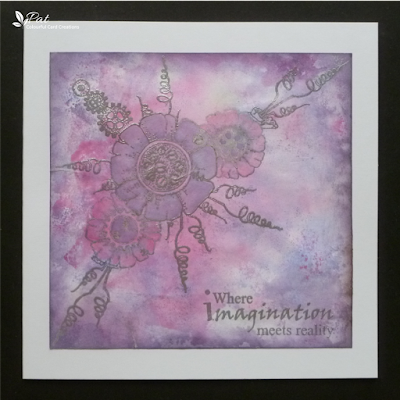 This second card features stamps from Punky Flowers and a sentiment from Punky Expressions.  I made a watercolour background using my Distress Inks in Picked Raspberry and Dusty Concord and then stamped the middle flower using the middle sized flower and heat embossed it with WOW Silver Metallic Embossing Powder.  I then made a mask for it before stamping the two smaller flowers, one either side and heat embossed them with the Silver EP.  I then masked these two and stamped the coil branches six times and added the smaller of the group of cogs  and the sentiment, all  Silver EP heat embossed.  I finished by adding some of the same two colours to the flowers using a waterbrush. 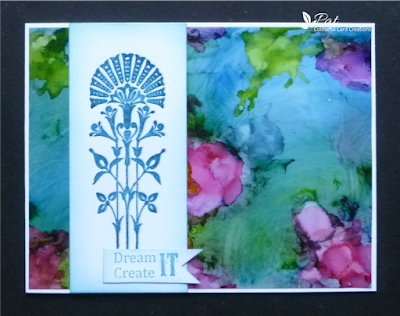 This next card uses an image from Punky Flowers and I decided to put it over an alcohol ink on Yupo background which I had already made with Stream, Flamingo, Clover and Citrus.  I added the strip of white card with the image stamped in Momento Teal Zeal and heat embossed a couple of times with WOW Clear EP to really make it stand out.  I then blended the same ink around the edges using a blending tool and added the sentiment from Punky Expressions cut into a banner and using the Teal Zeal again, but didn't heat emboss it this time as I wanted it to have a softer look, and edged very lightly with the same ink.

My last card  is a watercoloured scene using Steampunk Birds and one of the flowers from Punky Flowers. 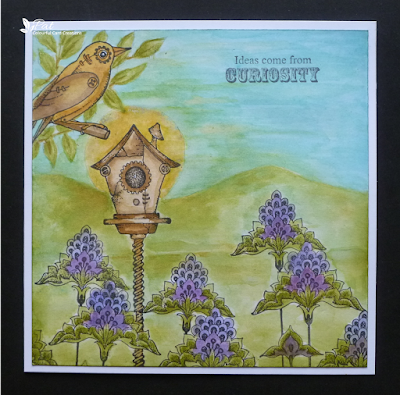 I stamped the flowers in the foreground first using Versafine clair Nocturne ink and then masked one of the flowers and added the birdhouse, and then the bird on the perch, all using the Nocturne ink.  I then coloured them all using my Distress Inks in Brushed Corduroy, Tea Dye, Carved Pumpkin, Scattered Straw, Fossilized Amber, Picked Raspberry, Salty Ocean and Peeled Paint.  I did occasionally mix some of the colours together for other tones.  I then added some hand drawn leaves around the bird to make it look like he is perched on a branch though obviously it does look more like a perch than a branch, but a bit of poetic license there..lol, and then I added a golden sun behind the birdhouse using Scattered Straw and Fossilized Amber.  I finished by adding the grass using Peeled Paint and added a bit of blue to it for the hills and then did the sky with Salty Ocean and added a sentiment using second generation Nocturne ink.

I wanted to give this a bit of a fantasy look, I wasn't going for very much realism as these stamps give everyday objects a bit of a twist.

Thank you for coming to see the blog today and I'll see you again soon.

Such wonderful cards! Love those jelly fish! And your alcohol ink background almost loos like a map of the world! Gorgeous!

Fab selection of cards . My favourite has to be the funky pink flower card. Hugs Mrs A.

All 4 cards are fabulous and they have a fantasy look, Pat! I can tell they are made with special care and attention to details. The lightly brusho colored background with the sea creature' second generation stamping makes a dreamy undersea scene.
I LOVE the background of the second card! Those (pink, lavender, purple) are my favorite colors. The silver embossing goes so well with them.
The vibrant AI background is a great contrast to the white panel of the third card, and the edging makes a smooth transition to the background.
The watercoloring and masking of the last card are fantastic! Thank you for sharing these beauties!
Hideko xx

They are all wonderful but that AI background is fantastic!

Always such fabulous inspiration and creations and I enjoy reading how you make them x. Love them all of course but extra loving those funky steampunk fish x.

Your backgrounds are just amazing Pat and the flowers in the last card are stunning! Vicky x

I'm spoilt for choice here Pat as they are all stunners! I especially like the third one and the background is so beautiful but I also love the colours of the second one too. See, I told you I was spoilt for choice... all gorgeous x

What a gorgeous collection of cards, they're all so creative and I love the colours you've achieved with the alcohol inks. Thank you for stopping by my blog and taking time to leave a kind comment x

A lovely collection of four beautiful cards Pat! You really know how to showcase the CB images. Amazing work on each card! xx

Gorgeous cards, the colours are so soft! A bit fairytale like to me, very beautiful!