Hi everybody.  This is my card for the Rudolph Days Challenge.  I was too late for July so intended it for last month but Mo was unwell so it was cancelled.  I won the die there several months ago, and wanted the challenge to be the place I first used it.  The die is from Tutti and called Winter Wonderland Window. 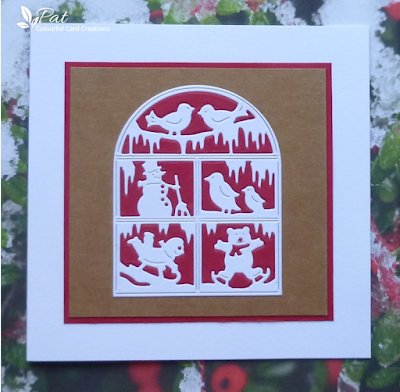 I started by die cutting it twice from white and red card backing it with Stick It adhesive and cut a square of kraft card to put it on.  I then took out all the white die cut pieces and put them aside whilst I stuck the main white piece down onto the kraft card.  I then picked out all the red inner pieces..I did try to keep the whole red piece together so I could see where all the pieces went and apart from a few the adhesive backing kept it together quite well.  I have to say that the big pieces were fine to fit in but the smaller pieces were difficult to place without them dropping and disappearing on my table.  I managed pretty well with a pokey tool, but the bear's nose jumped somewhere and after a minute search I found it and stuck it down.

I mounted the kraft on to a red mat before adding it to my white card.  When I had finished I noticed that the bear's nose had disappeared and this time I could not find it..it obviously lost some stickiness when it did the disappearing act..lol.  I had to use what looked like the same piece from the white set and coloured it with a red Inktense Pencil and stuck it with glue this time so hopefully it will stay put.

I did make this second card using the leftover red pieces but cut off the frame holding it all together leaving just the five window pieces separate and mounted on to a snippet of green card leaving spaces between.  I then mounted this onto a snippet of gold card which has an embossed pattern before attaching to my base card..a much simpler look. 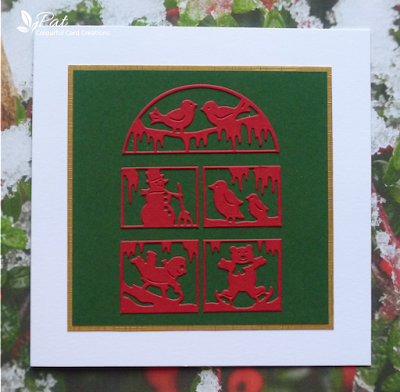 The first with the infilling does look nicer I think but I'm not sure that it is nice enough to spend so much time and effort on using this technique, so I think this will be a one-off.  I have left them both without the sentiment for now and will decide what's appropriate nearer the time.

Thanks for visiting my blog today and I'll see you again soon.

Two wonderful designs using this very fun Christmas window die, Pat! I LOVE kraft, red and white cards for Christmas. This die looks so good in those colours. I know what you mean about misplacing some of the pieces ... I swear they have a mind of their own! :) But you did great, creating a very special card. Your second one is so pretty with the traditional green and red. I like how you left off the outer frame. So clever! xx

This is a super die but quite a faff to piece all the bits back together I imagine. Well done for perseverance.

Two beautiful cards made with your win Pat, I love them both. Thank you for joining in the fun at Rudolph Days this month.

Hello Pat, your cards are just lovely. I love all the little dies within the window and you've used fab colours. The card made with the bits is super, well done using them up, Kate x

Hi Pat,
Happy Rudolf Days.
I love the effect this card gives with all the windows with all the toys and winter animals peeking out of it.
Yes I prefer the first one but it sounds like a whole lot of patience putting all the pieces back together.
You must have some patience.
Fab that you could use up the snippets left over to make the second.
Thank you for joining the Rudolf Challenge.
Lots of crafty love. Jenny L. DT

What an intricate die! I can imagine al the work you put in the first one, so many small pieces! But the effect is very pretty and lovely in these colors! The second one more simple, but also a very lovely card and nice to have an extra card for the Christmas stash!!

So glad that the bear got a nose in the end Pat x. Both cards look fabulous and I am so glad you persevered with the first amazing card. The die cut looks so intricate and so very pretty and love teh colour combinations too x.

It is absolutely gorgeous Pat! What a beautiful Die. I could kick myself as I missed it completely with DT and karate stuff! I had made 3 cards for it too - Silly me!

What a gorgeous die, congrats on winning. I love the inlaid technique, I know it is a fiddle but the end result is worth it. It looks fabulous xx

Wonderful twofers! What a great die to win and a fabulous way to use it. I do love the first red, white and Kraft card… such a lovely color palette. Great job inlaying all those fiddly little pieces, too.

Two fabulous cards Pat! i feel your pain at all the work with the first version but always worth it in the end. Clever girl and also very patient! Love the second card too - spacing the elements works perfectly!

Both cards are so beautiful, Pat! It was worth the time and effort to create the first card. The inlaid die-cut looks awesome! I think everyone has the similar experience to the tiny bear's nose, and totally feels for you. :-)
Great use of the leftover for the second card! Cutting off the frame is a clever idea to give the die-cuts a different look!
Hideko xx

Your perserverance paid off and you got two lovely cards!