Hi all.  I have another Mo Manning digital image to show today called Bismarck used on this card for our son in Australia.  I also used a Crafter's Companion Embossing Folder called Frosted Elegance also having it's first outing, and a Memory Box die called Hanging Ornaments which I used on my last post here. 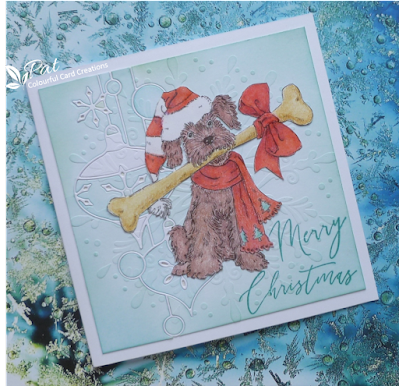 I started by colouring the image with some pencils and also used some oil and a paper stump to get a smooth finish, and fussy cut it out.  I then then used the embossing folder on a piece of card cut to fit a 6" square card and die cut the bauble from this piece having backed the left hand side with a piece of Stick it adhesive.  I then very carefully removed the pieces, luckily there weren't too many small ones, and I had already decided not to replace all the small pieces in the snowflakes.  I then coloured the background using a blending tool and Peacock Feathers Distress Ink making the colour darker around the edges and lighter towards the centre keeping the colour light.  I replaced the outer white frame of the bauble and then started to infill the other white pieces matching the pattern where necessary.  I finally coloured the other pieces with the background blue and put them back and used some double sided tape around the rest of the piece and  added the sentiment using the same Peacock Feathers ink before sticking it to the card

I finished by adhering the cute dog as close as I could to right of centre as otherwise all my hard work with bauble die would have been hidden...lol.

Although the card was sent on 2nd December it has never arrived, naturally I was rather disappointed, but luckily only the second time he has never received one of our cards at all.  I was hoping that it might eventually appear, but don't think that will happen now.  Thank you for visiting my blog today and I'll see you again soon.

The dog image is beautifully coloured Pat and looks great with the diecuts in the background. Post has been so slow everywhere I think but especially getting to us here in Australia. Fingers crossed your son will still get his card :) Thankyou too for playing along at Watercooler Wednesday, Cathy x

Such a gorgeous card Pat, I love the background that you've made as well. Thank you for joining in the fun at Rudolph Days this month.

What a shame that this gorgeous and cute card didn't reach its destination. Patience well rewarded in the bauble detail - love it

This is fabulous Pat, loving the soft background colouring and your colouring is great, another super Christmas card ready for 2022

Very interesting background. I love the inlaid look. So hoping he'll still get it. Back in May 2020, I ordered 2 stamp sets from Happy Little Stampers in Oz. They finally got here to Texas 3 months later. I was pleasantly shocked, lol. xoxo

What a pity your Son didn't receive his card, it's really fabulous, I love the cute dog and your fabulous colouring. Beautiful embossed background and colours. Perhaps it will still turn up Pat, Kate x

Pat this is an awesome card. I love all the different elements, that background and your colouring on that doggie. Thanks for joining us at WWC. Tristan DT.

awesome image Pat, and love the way you coloured him :)

What a shame that this thoughtful and glorious didn't arrive with your son in Australia Pat x. The background embossing and the pretty die cut bauble looks amazing and I love how you did it. What a super cute dog, with great colouring and blending x. Thank you for stopping by my blog Pat and yes I did stamp into the molten gold embossing on the deer's die cut head x.

Hi Pat,
Happy Rudolf Days.
Oh what a pity your Son never received this.
This is such a lovely card and a wonderful design too.
Your dog is coloured beautifully and all that work pieceing the bits of bauble back into place.
Your fussy cutting is brilliantly done also.
Thank you for joining the Rudolf Challenge.
Lots of crafty love. Jenny L. DT

Hi Pat, sorry I haven't been around much of late but I've had no computer and yours is one of the blogs that will only let me comment as anonymous on my iPad. Your card is smashing and what a sweet image. I also like how there's so much interest in the background too. There were a few people who I didn't get Christmas cards from at Christmas and they never usually miss, so I'm guessing it's because of staff shortages at the Royal Mail. Crafty hugs, Sandra x

I can see that I missed a lot while I was away on vacation. I see three beauties you made in the meantime. I love all your cards, but especially love the one with the treble clef shape, it is wonderful!!

Beautiful card, Pat. The background is wonderful, well worth the time and patience to create it. What a shame the your card didn’t arrive at its destination. I wonder how many of our Christmas cards got lost in the post. I sent a card for a card swap a last month which didn’t arrive, so the Royal Mail can’t blame it on the Christmas rush. It’s especially frustrating when it’s a handcrafted card that’s been made. I hope your son eventually receives your card. xx