Lighthouse Across The Water

Hello there.  I made this card for my DH whose birthday was last week.  It is never easy making cards for the men in our lives, but I thought he would probably like this lighthouse which is part of a set by Sheena Douglas called A Little Bit Scenic - Sea Scapes. 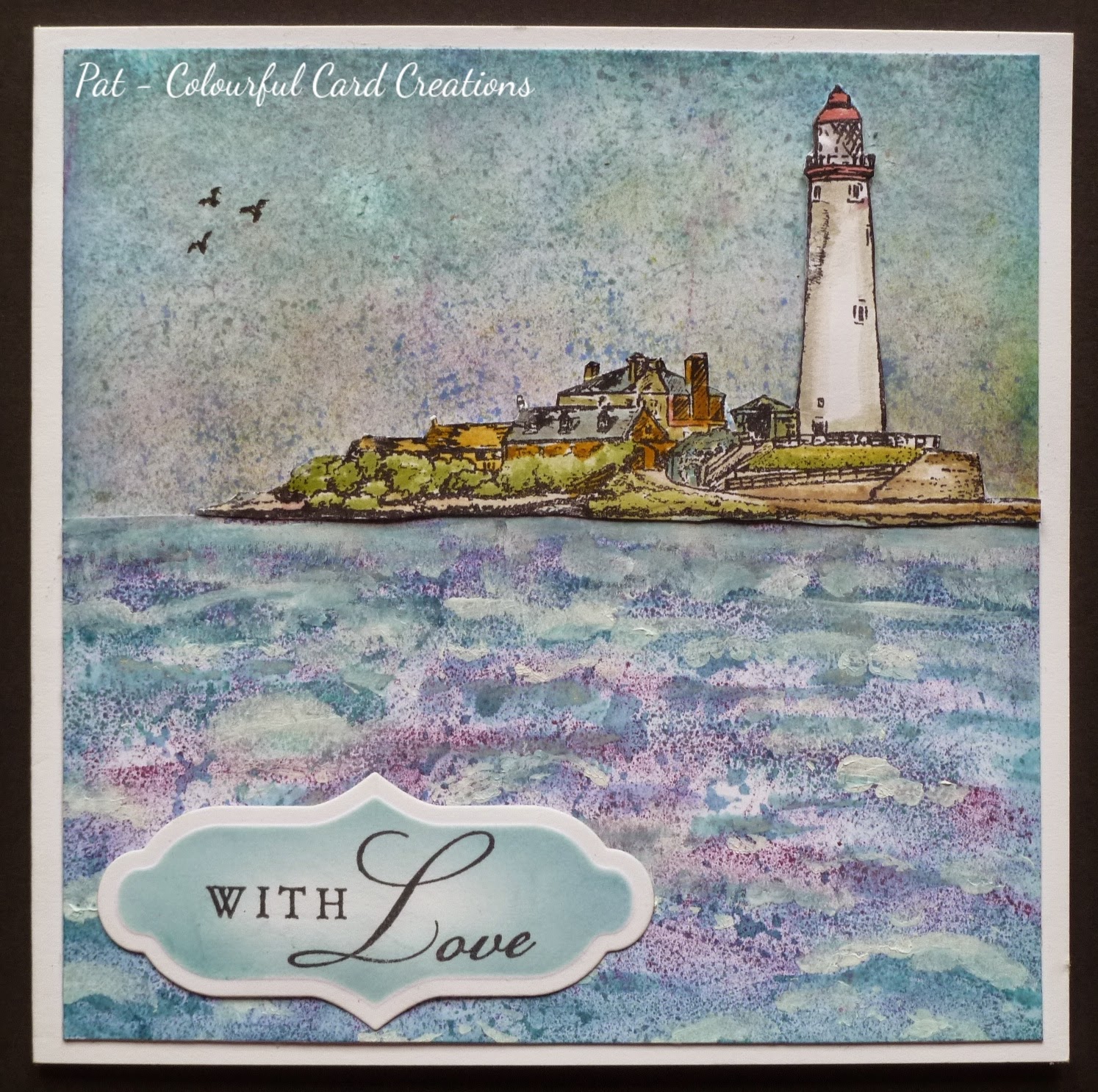 For the background I used a selection of blues including Adirondack Stonewashed, DI Tumbled Glass and Peacock Feathers, and Memento Teal Zeal and Nautical Blue, plus some DI Seedless Preserves.   Using the Gelli Plate I made the background scene by laying the colours so that you could see where the sky ended and the sea began.  I used a piece of crumpled cling film and made some texture for the sea and darkened the sky at the top and outer edges but kept the sky much smoother.  After pulling the print I decided that the sky was not quite what I wanted so cut off the piece above the horizon line, and started again with another print, and this print I liked much more so then combined the two pieces together.  I added some extra detail to the sea by darkening some of the colours and giving it some movement by adding white horses using some white acrylic paint, and then telling myself to stop before going too far and ruining it!

I stamped the lighthouse using Black Archival ink on a snippet of white card, and using my inks in various colours including Memento Bamboo Leaves and London Fog, Adirondack Sunshine Yellow, and Distress Inks Barn Door, Walnut Stain and Spiced Marmalade, I painted the scene using a water brush.  I cut this out added it to the background minus the bit of sea which is also part of the stamp,  using some Pinflair Glue Gel, and then on the horizon line and round the front I added a tiny bit more acrylic too.  By rights I should probably have darkened these areas not lightened but quite liked the effect.

Lastly with another snippet of white card I stamped the sentiment again using Black Archival ink and then die cut the shape using a Spellbinder Labels Thirty Three, the middle sized die, and leaving it in place inked it using Memento Teal Zeal.

To finish I made three little birds with a Black Micron Pen.

Now I would like to introduce my latest two followers:

Please visit these ladies and see the their lovely creations, you won't be disappointed!  I would like to say a big thank to Asha, Marja, and all my other followers, and also everyone else who stops by as I really do appreciate your interest.

Pixie's Crafty Workshop - Week 133 where we have to use snippets of paper or card.
The Artistic Stamper - By the Seaside.
Creative Card Crew - Sea/Beach

Hey Pat, just saw this pretty card over at the Playground, and it is gorgeous! I enjoyed reading the techniques nearly as much as the card. (BTW, happy belated bday to DH- hope ya'll had a grand day). This is really stunning with the way you've done the sea & sky, and fantastic that you're becoming so accomplished with the gelli. You ROCK! TFS & Hugs.

Lovely sea scene Pat. I love how made such a lovely sea area. Really nice sentiment stamp too. I hope DH enjoyed his birthday.
Jean x

This is a gorgeous scene. I love the sky and the water...they look real!
The lightouse stamp is great...has a lovely masculine feel!

What an outstanding scene, Pat!! Your coloring is fabulous! It's hard to tear my eyes away from the view and it was fascinating to read how you did it! Happy Belated Birthday to your mister! I'm sure he adored his card!! Hugs, Darnell

Wow Pat, I love this card. Such a beautiful scene! The lighthouse reminds me so much of St, Mary;s island in Northumberland - of course Sheena hails from the North so perhaps it influenced her. Absolutely beautiful colouring!

Beautiful sea scene Pat. It's making think of the lovely area where Glenda has moved to ! Shirleyx

Gorgeous scene Pat. I do like how you have put the light house at the top which make it looks set back. Fabulous mans card. They are always difficult but this is such a treat.
Hugs, Flo x

This is so gorgeous Pat, I am gob-smacked. Thank you so much for sharing your lovely creation with us at Creative Card Crew.

What a lot of work went into this card, but so worth it for the finished result!
Hugs
Debs x

<Wow what a stunning landshape, I love it, it let me think about going to the seaside, the water where it is much cooler!! Great image and great colours , I adore it!!

Oh My Goodness Pat - I LOVE this card - just fabulous.

This is a really lovely scenic design Pat.