This is the second card which I made for Rudolph Day on which I used an Indigoblu stamp set called Here Comes Santa.  I used just the sleigh and the snowflake edge. 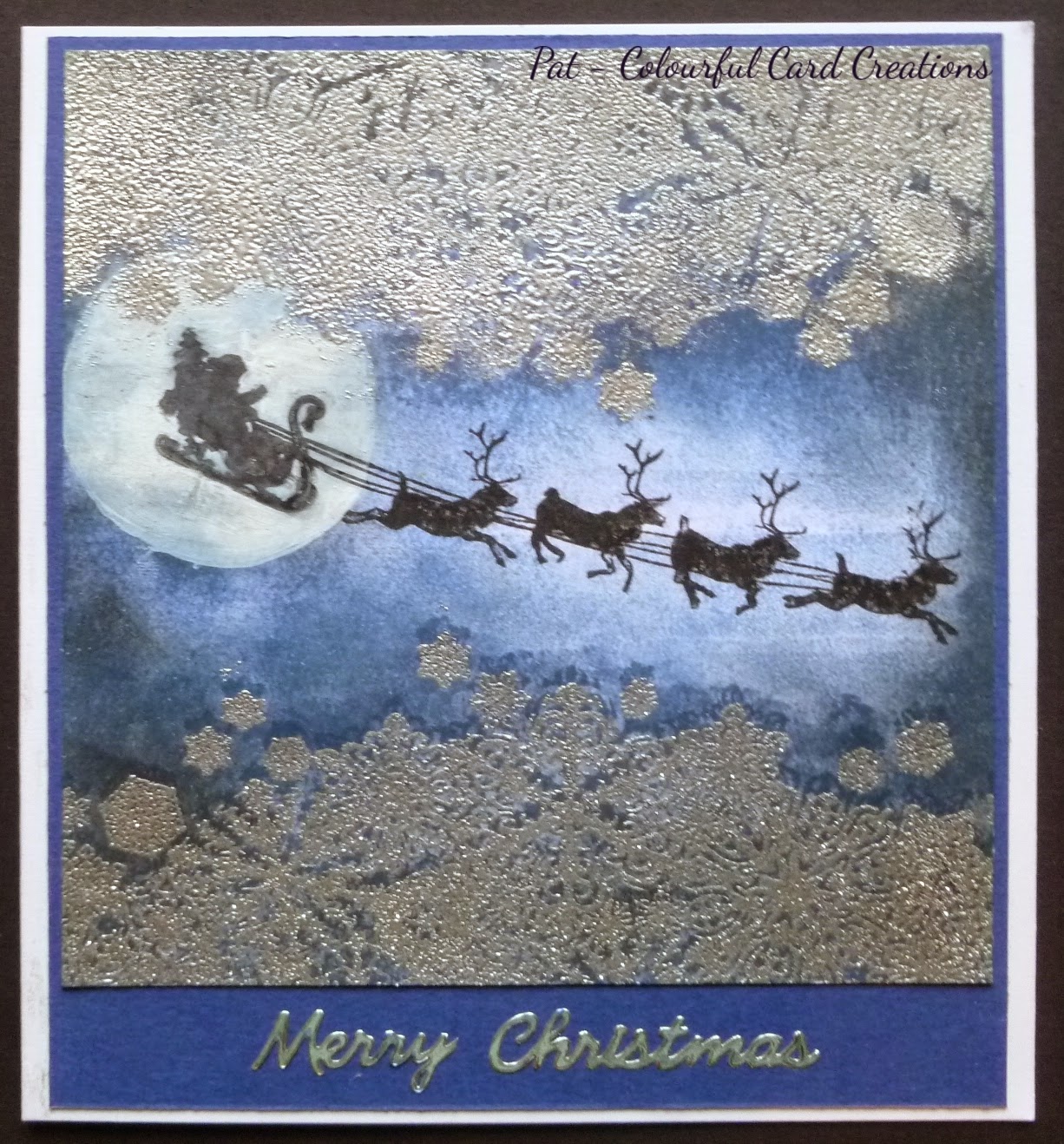 I decided on the approximate size of the topper and stamped the snowflake edge top and bottom using Versamark and then heat set it with WOW Silver Sparkle Embossing Powder.  For some reason this did not come out as clearly as it might have done but decided it looked nice and glittery so would go with it.  I then sponged using Distress Inks in Faded Jean and then to darken it even more I went round the edges with Black Soot which muddied it a bit but thought I would carry on and see what happened.  I had left a lighter space in the middle which is where I stamped the sleigh after first removing the mask.  I decided to try some shadows across the moon but overdid it a bit so used some white acrylic paint over it to brighten the moon back up.  This was not easy as I had already stamped the sleigh in place so had to use the white paint around it, and when dry very carefully added one or two more shadows back in.

I finished by layering this on to a piece of light navy blue card leaving a space at the bottom for the sentiment.  This was a piece of leftover card and wasn't quite square so when this was mounted on to the white card it didn't look quite right so cut a piece off the white base card to make it fit better.

I thought this card could have turned out better but as I had spent a reasonable amount of time on it I decided to use it.  I am very self critical as you will probably have noticed, but I always try to learn from problems, so hopefully if I make another similar card it may go better.

Thank you for coming to visit.

I am entering this in the following challenge:

Gorgeous card Pat! This one really stood out to me. I love the blue. Karen.x

I enjoyed reading through the post for this very pretty card. You're being too hard on yourself, but I understand what you mean. From where I'm sitting, it is most lovely, and you've done some great techniques. Loved your idea of the snowflakes borders as you did them, with Santa flying through that blue cloudy sky against the moon. I'm so glad you kept on going with this one...it turned out great. You knew what you had in mind, we didn't...so it looks really stunning in this post! Glad you didn't toss it! TFS & Hugs

Oh this is fabulous Pat, love all the sparkle.
Thank you for joining us at Simon says Stamp Wednesday Challenge.
Luv
Debby