Hi everybody.  Here are another three cards I made for Chocolate Baroque's Hochanda Shows with a love theme this time but also with a steampunk flavour to some of them.  My first card features the Punky Hearts set of stamps. 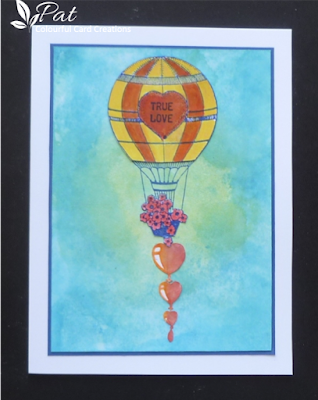 I decided to use the balloon so watercoloured the background using Salty Ocean and Squeezed Lemonade Oxide Inks.  I laid the inks down on to my glass mat and added some water and put some yellow on first, dried it and then some of the blue, and did this several times.  I then stamped the balloon onto the background, minus the three little flags at the bottom, using Versafine Majestic Blue Ink and then matted this background on to a piece of dark blue card.

I then stamped the balloon on to  piece of white card using Versafine Majestic Blue Ink and added colour using more of the Squeezed Lemonade Oxide Ink and some Carved Pumpkin with some Candied Apple Distress Ink over the top as I decided I wanted it darker, and then just the Candied Apple on the little flowers, and then fussy cut the balloon envelope and also the flowers and basket and added these on to the base image.  I the stamped the vertical hearts using the same ink and coloured in the same way and cut these out and added them to the image.  I finished by adding one of the sentiments from the set on to the heart using the same blue ink.


The next card features the Punky Hearts set and the flower in particular. 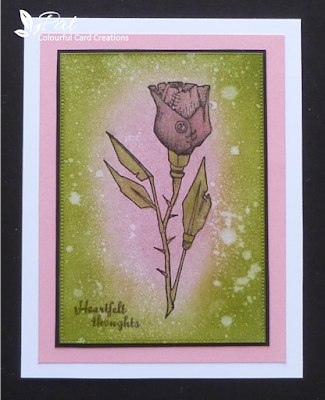 I started by using my Crealies Pierced Rectangle set of dies to cut a rectangle from white card just a bit bigger than the flower.  I then coloured it using Victorian Velvet Distress Ink in the centre and Bundles Sage around the outside, and to darken it a bit of Peeled Paint around the edges.  I stamped the image using Versafine Onyx Black and coloured the image with the same colours using a Wink of Stella Clear pen to add sparkly to the colour on my mat before applying it with the pen.  I then covered the image with a piece of paper and spritzed with water to bleach out some of the colour.  I must say some of my splatters were rather larger than I had anticipated, but it suits the steampunk design.

I finished by adding a sentiment from the A Heart Full of Love set using Versafine Smokey Gray Ink and then layered the image on to black and then pink card before adding it to the white card.


The last card was made with the Fluttering Hearts set of stamps.  I started by stamping the large butterfly heart on to a piece of white card which I had die cut with a stitched square from The Works, and gold embossed it with WOW Gold Metallic Embossing Powder.  I coloured it using Crushed Olive, Carved Pumpkin and Peacock Feathers Distress Inks.  I finished by adding a sentiment from the set also gold embossed. 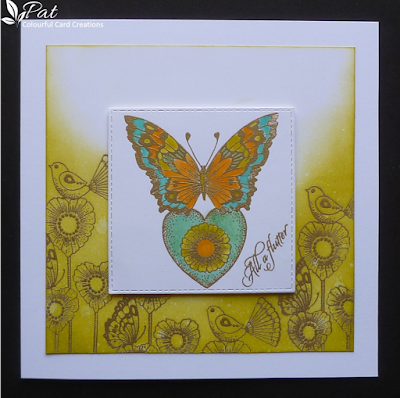 I cut the background to the correct size for the card and gold embossed the heart flowers with the bird and butterfly several times across the card bottom taking the image off the card.  I then blended Crushed Olive ink over the embossing taking it beyond the embossing and fading it out towards the top and just inking the edges.  I finished by spritzing to make some water bleached spatters.

I glued this to the card, and then added the image square but gave it some dimension by adding a piece of foam to the back.

Thank you for stopping by today and I'll see you again soon.

Great cards, Pat. I especially love the way the ink fades away on the background of the butterfly card. It is very eyecatching.

I was in a tizzy with my tooth and the painkillers I took to calm it down till I got to the dentist. I always have 2 extra per day on my prescription, that I don't take for my knee. I can use them if I have a particularly bad day. I try to never use them and now I know why...cuz that is what I used for the took pain and they made me so loopy that I drew the prize a day early.
So you still have time but I know it is the middle of the night where you are. The good news is that I am removing April from the 11 month reqirement for the yearly prize draw.

Oh what lovely cards Pat... I love the designs! The last one is a real eye-catcher! Thanks so much for the heads up on Pixie's too!

Thank you for sharing these fabulous cards and what amazing inspiration Pat.....Thank you x