Silver and Gold Baubles and Snowflakes

Hi everyone.  I have a card, a bit last minute, for the CAS Christmas Card Challenge where the theme is Silver and Gold, and I have used this Memory Box die called Hanging Ornaments and I also used some snowflakes from Creative Stamping Magazine No. 100 which was one of four sets of stamps by Crafters Companion, and the sentiment was included in the set of snowflake themed stamps too. 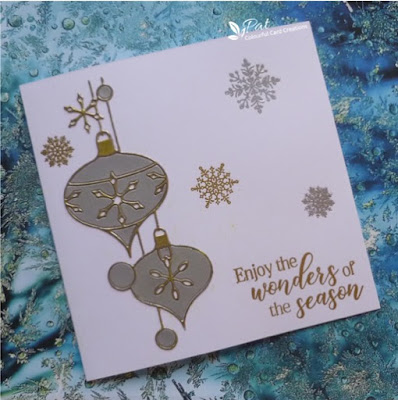 I started with a white die cut baubles image which I have had sitting waiting to be used amongst my snippets, and decided to emboss it with WOW Platinum Embossing Powder, and then cut it again from a soft silver coloured snippet to coordinate with the frame rather than use the brighter mirri card.  I used some spray adhesive to stick the gold outline down on my 6" square card,  and then with some wet glue I adhered the larger silver pieces of the baubles and the circles back into the spaces.  I decided that the smaller pieces in the snowflakes were far too fiddly so they have been left open.  I did have an argument with one piece of the die cut and it bent out of shape so I cut it off as it didn't effect the finished look too much.  On reflection I decided that maybe the platinum didn't look gold enough, so I went over the outline very carefully with a gold Sakura Starlight pen which brightened it up and made it sparkly too.

I finished by adding the silver and gold snowflakes and gold sentiment embossed with WOW Metallic Gold and Silver Embossing Powder.

I like the different tones of silvers and golds Pat. I had a little chuckle about the fiddly bits. A very striking and beautiful card and the sentiment is fabulous too x.

A lovely card Pat - I love the silver and gold combination.
Kath x

I just love our beautiful gold/silver ornaments hung amongst the pretty snowflakes Pat! And what a lovely sentiment with it's mixed fonts too! thanks for joining in my CAS Christmas challenge this month! Julia xx

What a wonderful card Pat, I love the baubles design and your metallic colour pallet is so beautiful, I love silver and gold together, it's a very classy and elegant card, Kate x

Thanks for giving me a push on the playground swings earlier!

Beautiful use of the gold and silver! Love those inlaid baubles and the extra touches of the snowflakes! Thanks so much for joining us at CAS Christmas.

your Christmas ornaments look wonderful embossed in silver and gold, love the addition of the little snowflakes. thanks for joining us at CAS Christmas :)

It's a beauty Pat... very elegant and I love your design

Elegant and beautiful! Thank you for joining our challenge at Peace On Earth!
Diane POE DT {Nellies Nest}
{Peace On Earth}

What a beautiful card Pat! Love the silver & gold! Thanks so much for joining in the fun at our Peace On Earth Christmas challenge! Good Luck and we hope you’ll come back often. We appreciate your support on our new challenge adventure!!

Oh Pat this is BEAUTIFUL! And I'm chuckling at your no-nonsense attitude, it rocks! If these die cuts cannot behave, off with their heads! Love it and I live there! Yes to leaving those fiddlies open. And thankyou so much for continuing to note your magazine issue # when you use the stamps. I am so behind but did manage to order some stiff stamp storage boards to transfer my CS stamps to, so I am making progress. I almost rip the stamps pulling them off the clear plastic! Have a good one, xoxo

Very elegant card Pat - love the design and super colours! i had a giggle about you being a bit ruthless too!

Beautiful gold and silver design Pat, great job with inlaying the baubles, Memory Box have some fabulous dies but by gee they can be fiddly lol! Thankyou too for playing along at CAS Christmas, Cathy x

Beautiful design. Thanks for sharing with us at Peace on Earth Challenge Blog.
Kathy
POE DT

Lovely card!
Thanks for playing at the ABC Christmas Challenge!
Helen x

Gorgeous card Pat, I love the CAS design and your baubles are beautiful. xx