Hi all.  I had in mind to make a card for a upcoming masculine birthday using my alcohol inks on Yupo paper with some stamping which is what I did but wasn't sure that it was good enough to send, but have decided to show it here and see what you all think.  I used the Steampunkery set from Chocolate Baroque, and I eventally made another card to send using the same set which you will see on a future blog post, but I used another stamp for that instead. 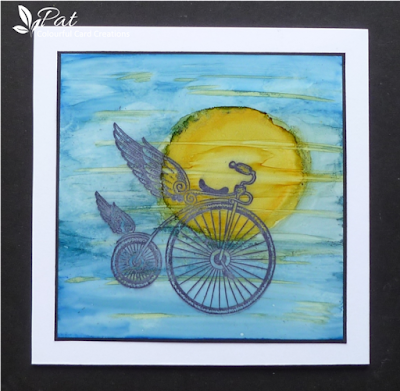 I started with the alcohol ink background.  I dropped several shades of blue on to the yupo paper with some blending solution and used a brush to move it about.  I started with Indigo but it was far too dark so gradually added more solution and covered with mainly Stonewashed with a little Pool, and then Lemonade and Butterscotch for the sun.  I wanted to make it  a little bit surreal so I pushed the yellow around a bit and on the surrounding sky in those lines you see as I think it gives the feeling of movement.  When dry I added the winged penny farthing using Black Archival ink and using my Misti I was able to ink it up quite a few times but I still feel it is rather patchy and some bits look darker than others.  I was going to use Versafine but I wasn't sure that it would dry on the yupo so stayed with the Archival.  I mounted it on to black card and then on a 6" square white card and for now decided to leave it without a sentiment as I'm still not sure if I would send it to anyone anyway especially as it was a bit of an experiment having painted but not stamped on the yupo before.

It would have been better to heat embossed the image but this yupo is very thin and does not like the heat gun.  It is a recent acquisition and I obviously didn't read the description properly where it plainly says 85gsm which is only like the thickness of copy paper so no wonder it won't heat emboss.

On a different subject, I have a lot of  spare 7" square white envelopes which I don't need, and also some 8" square ones too.  Due to a lack of space I buy just one size of white cards and cut them down to suit and buy a couple of sizes of envelopes i.e. 6" square and 7" x 5" which are the two main sizes I make.  Before sending them for recycling I thought I would see if anyone in the UK has need of this size of envelope.  I have 'comment moderation' switched on so if you would like some just leave me a message there and I will get back to you.  I do occasionally make my own cards but I am basically lazy and much prefer just picking up a pre-folded card.

Lastly before saying goodbye, I have a new follower called Lia who I can't find any details for, so Lia if you would like to get in touch by leaving me a comment (as mentioned I have comment moderation), leaving your details and then I will give you a shout out on here.

Thanks for visiting today and I will see you again soon.

Pat, I love your AI background. It really does look like clouds floating in front of the sun. Great steampunk bicycle.

Such a fabulous card, love the background .
luv
Debby

A lovely card Pat and I rather like it's uncomplicated feel. The image is a great focal point and the background doesn't detract from it. I like the way that you've pulled the clouds through the sun. Wishing you a happy weekend x

FAB techniques and a super card too, Pat, how did you like the yupo paper? If you try the versafine again and find it doesn't dry - try heat embossing with clear, that should solve the problem, but, you've probably already thought of that one

Thank you for that Kathy. You can actually heat emboss yupo provided it is reasonably thick but unfortunately the one I bought is only 85gsm and I tried on an offcut to see if it would work but it instantly warped even though I kept the heat gun moving.

Hello Pat, what a fabulous card and perfect for a male. I love the background and the clouds travelling over the sun, a very ethereal looks, and the the steampunk bike is brilliant stamped with the sun. I've never used Yupo paper though I have some, I've just never gotten around to using it, but it looks good here with your inking, Kate x

You did a fantastic job with that BG it's terrific! Super card! Thanks for the offer of the envelopes and had I still been doing the club they would certainly have come in useful for albums. Have a wonderful day and I'll catch up in a few weeks.

I think your background is amazing. It has lots of movement and is very unique. I love the way you painted with the inks onto the yupo. I find stamping onto the alcohol inks can be patchy even using my misti....Some alcohol inks take it better than other. I just have to work out which ones! You should definitely send this card pat in due course and I think a sentiment would only add to this fabulous card x. ( I did exactly the same with ordering 85gsm yupo.....)

Love the abstract, artsy look to this card Pat. The colours are so gorgeous too!
Hugs
Carol x

Love this card, Pat, perfect for a masculine card. I'm sure whoever you decide to send it too will be delighted to receive it. I've only ever used alcohol inks on glossy photo card, I must get hold of some yupo paper some time. xx