Hi there everyone.  I needed to make a masculine card very quickly for a family member and so I went with my Couture Creations Grand Sunset Sails Embossing Folder which I have had for quite a long time but haven't used all that much.  Unfortunately as with other CC folders they come and go and so not easy to source now.  This card also gets my vote for the longest time to make an easy card.  Everything that could go wrong did go wrong...lol.  I will explain later. 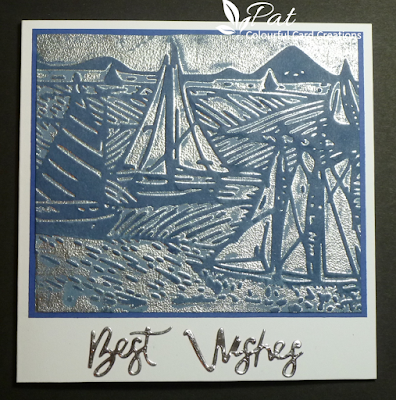 For the card I used:

The technique I used here was the inking up of the folder with Versamark before embossing it and then adding the Embossing Powder and heat embossing it.  This particular folder has a lot of positive and negative on both sides of the folder so wasn't easy to choose but in the end I inked up the inside of the front using a brayer which helps to keep it on just the areas where you want it.  After embossing I added the powder and heat set it.  I have to say it wasn't totally covered but I decided it just had a slight random look, but after thinking about it for a bit I decided to brayer the Faded Jeans Ink on to the other parts of the scene which brought out more of the detail and seemed to finish it better.  I did cut it down a bit and mounted it on to some dark blue card before mounting that on to my white  base card.

I finished by adding the silver die cut sentiment which I had backed with Stick It adhesive.

If you are short of time or just plain bored please feel free to miss this bit......

Well, I thought I had finished but then realised after it had been sitting whilst I ran an insert off the computer, that I had mounted the scene upside down on the card.  At this point I had about 15 minutes to make the post which luckily is just a short walk away.  I tried to pull it apart but wrecked the base card, partially wrecked the backing card and slightly tore the scene itself.  Well as you can imagine the air was blue and I thought well how am I going to get this in any state to send at all, having by this time missed the post.  I ended up by starting with a new white card, stuck back the bit that had ripped from the topper, and I managed to stick back the bits that had torn from the back of the card it was mounted on to, and at this point I used some extra bits of tape on the back of the topper to help flatten it a bit, before remounting it, although it was looking a trifle bedaggled by this time.  I decided to stick it to the new card and see what it looked like, and readded the sentiment which luckily came away from the old card base without any damage.

I hate to throw anything away and after it had sat a while, it began to settle and as you can see from the picture above it looks OK.  I just wanted to make the point that it is possible to save something even when you think it is beyond repair!  On reflection it would have been better to just cut the whole thing round the edge and leave it on the piece of white base card, especially as I had used double sided tape which when you want it to stick doesn't, and when you'd rather it hadn't stuck so well proves to be a tough customer...lol.  It went in to the next day's post so was probably received late but better late than not at all.

Before I go I want to introduce who I believe to be a new follower called Sue whose blog you will find here.  Without a photo they don't join the front of the queue of faces and it was only when I realised my number had risen that I did some investigating and came up with this lady so please do go and visit her wonderful blog as there are lots of lovely things to look at.   If this isn't the correct blog then perhaps Sue you can let me know and I will give you a shout out.

Thank you for visiting today, and I promise my next post will not be so long winded.

Pixie's Crafty Workshop - Week 257 where we use our snippets of card and paper etc.
WOW Embossing Powder November Challenge.
The Male Room - No 49 ???Scapes - This is a seascape of sorts so hope this fits the brief.  (Honourable Mention)

Well rescued Pat, Isn't it so annoying when you spot a blunder just when you thought a project was finished. I'm sure we've all been there, I know I have (too often.)
Your finished card looks great, it's a super EF, perfect for male cards.
Jean x

Doesn't look a bit like one of my rescued disasters - this looks really nice - mine look like the dog has played with them for an hour or so!
Like the colours on this lovely EF too Pat!

Just LOVE this one! It's a beautiful card, and I thoroughly enjoyed reading about the adventures involved in creating it! (You will know that is so true! I could just picture everything you were describing that went awry!) I'm with you at hating to toss something (I think it's cause I grew up with folks who lived through the Depression of the 30's, and learned NEVER to throw anything away. Plus I also don't like to 'give up'.) Your perserverance was very successful at having a card you could be proud to send. I always forget about using the brayer to apply the embossing ink...and I recently had the same difficulty you described here. EP stuck where I didn't want it, didn't stick where it should have; luckily I could just brush it off and use a sponge to dab on some color (the silver stencil tree). I'm delighted at your rescue and it was very informative to read about the salvage efforts. Also encouraging to know it happens to others besides myself! Gorgeous masculine card! TFS & Hugs

Oh, my, I can just see the state you were in, having been there before myself! And why is it that our first thought is not to cut it down and instead we try to pull it apart? Do we think we are going to somehow be able to reuse the crumpled card base?! I always shake my head at myself when I do it (I'd like to say it rarely happens, but a certain hamster would rat me out for lying!) after I've wasted a half-hour! In this case, it did turn out more than okay, Pat, and I say "go you!" for persevering! If only the recipient knew what you went through to make this awesome card for him!! Hugs, Darnell

This is a fabulous male card Pat, and I love the embossing folder, something very different. Thank you for the great tutorial too.
Janice x

Hi Pat, what a dramatic scene you've created. Great idea for using the embossing folder. Thank you for the shout-out! Not sure why my photo isn't showing up. xx

What a fabulous scene you've built on your card, looks very reminiscent of lino prints we used to do at school. Thanks for playing at TMR.

Well done Pat - you ended up with a fabulous card and we would never have known the traumas along the way! Perfect card for a chap too.

That is a lovely embossing folder, I have not seen it before. TFS!

What a nightmare, Pat! Glad you persevered with the card as it's beautiful. I'm sure that the recipient was thrilled to receive it, even if it did arrive a little late. xx

Your card is gorgeous, the embossing with the folder is fabulous! Fantastic 'man card' as well. Take care, Shirleyxx

Beautiful card Pat. Great rescue! I am sure the recipient love this and probably didn't realise the trauma you had making it because you can't tell at all that anything went wrong. Have a lovely weekend.
Hugs Flo x

Thanks for the heads up about WOW Pat! x

WOW, fabulous save there Pat, no-one would ever guess you ripped it! You are very good at these techniques (I have tried them and they never turn out any good, I tried the one that you did that I had also seen Jennifer McGuire do, with the stamping and heat embossing with dies, and it turned out a complete mess!!). When I have done anything and it has been upside down, or inside out, I have just cut the whole of the front of the card off and re-mounted it to a new card base! Thank you for continuing to pop by my blog and leaving your sweet comments, it means a lot to me, especially now, when my blogging and visits are so sporadic! I'm hoping Mum will be strong enough for me to ease off a little next year and I can get back to blogging proper again! Have a lovely weekend! Hazel xx

Wow pat , nevertheless you had some troubles with it , it because very beautiful and artsy!! Super landscape and beautiful colours , I think the person who get i will be very glad with it!!!
Have fun!!
Maria

Faith A at Daffodil Cards said...

Well! good on you rescuing the card, it is really lovely. Thank you for joining us at The Male Room challenge. Faith DT

All the effort was worth it! This is a super card! Love the shimmer and the seacape. Great work. Thanks so much for playing along with our challenge at The Male Room this week! Deborah, DT.

Congrats! A wonderful card after plenty of effort. A well deserved Honorable Mention in the Male Room.