Hi there everyone.  I have a new stamp from Chocolate Baroque called Crackling Rose and it is the loveliest rose to colour so I used Festive Berries and Mowed Lawn Distress Inks, and Sunshine Yellow and Lettuce Adirondack Inks, and also a little Seedless Preserves on the shaded parts of the flower.  This was actually made before the Coneflower card which I have shown recently and which was made in a similar way.  I expect you will probably guess who this card was made for. 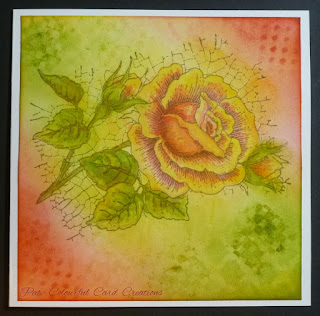 I found a snippet of white card slightly smaller than my base card and using a blending tool I placed the red and the green at opposite corners and the yellow towards the centre.   I stamped the flower using Versafine Smokey Gray ink and coloured the flower with the same colours using a water brush.  The red with yellow gave a nice slightly orange look to the flower and the Seedless Preserves just darkened the shadows slightly.

The stencilling was done using a piece of non slip matting which I thought might make a nice pattern. We have used it under a few items around the house and it has also come in handy on the bottom of the Sat. Nav holder on the dashboard to keep it in place.  I inked through it which gave the solid pattern, and I also inked the fabric which gave that chequerboard look.  I also used a mini stencil from Creative Expressions called Shabby Harlequin.

I decided to blend a bit more of the yellow over the whole thing to try to bring it all together, and I have to say I was rather pleased with the result as I haven't actually stamped and coloured straight on to a coloured background much before and I thought that everything mixed and complemented each other fairly well.

p.s.  I was surprised to find that this card found its way into the Chocolate Baroque Reader's Gallery Post here.

Before I go I have a few more photos to show you which we were taken whilst Darnell was visiting us and didn't want to show until the trip was over.  It's Hammy of course, and I think he stowed away in her luggage as he didn't want to be left behind, and as he wanted to surprise everyone along the way we kept him secret, though I think there were one or two photos where there may have been a sneaky peek.  He was very well behaved and was definitely a talking point. 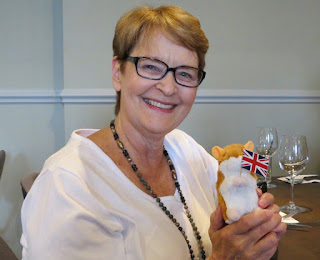 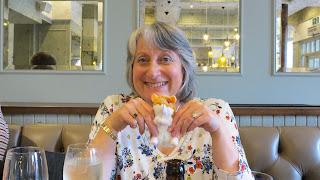 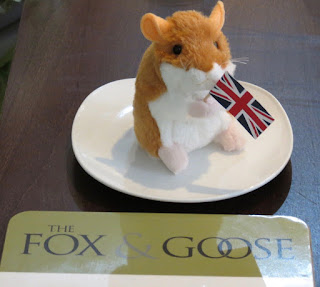 Hi Pat what a gorgeous summery card...love your colours. It's perfect for my Hot Summer Days theme this month over at Country View Challenges, thanks so much for joining us.
Jane DT xx

Your card is beautiful, gorgeous colour blending. I have started singing the Neil Diamonds song crackling rose since reading your post - shows my age!

Lovely card Pat, such a beautiful rose! The photos of Darnell and Hammy, you with Hammy and Hammy himself are great and just shows what a happy meeting it was! Thanks for the lovely memory! Have a great weekend! Hazel xx
My Card Attic

Lovely card Pat. Super blending of the colours. Looks like you had a great time with Darnell. Great photos. You are both very photogenic.
Hugs Flo x

Wow Pat, fabulous card - so English too. Your colouring is sublime.

Too funny about Hammy! I think your photos are better than mine but at least we both kept it secret :) Great photos of you and Darnell too!

Now, I spotted the magic word snippet in your post about the lovely rose card and I do allow a little bit of back linking so if you feel you won't have time to make another snippets card then feel free to link this one in. My Playground and I make the rools :)

Love your technique on coloring this beautiful CB rose. Your watercoloring is 'to die for'. Also a clever idea for your stenciling material as well...it's very effective to create some lovely texture. What a delight to meet Hammy and know that he didn't get left behind while his Mommy was traveling. Such fun to see both you & Darnell - TFS it all with us. Hugs. (had to laff at Pixie's comment about the Playground rools! Spot on!

Oh, this is beautiful! I so love the colors and how they blend together. I've got some flower stamps I feel are quite tricky to color, this technique is a great alternative!

Lovely subtle colouring on that rose... beautiful! Thanks for joining us at Country view Crafts challenge this month.
P.S Hammy looks so cute...

Dreamy, vibrant and so adorable Pat. Love the colours too and they blend perfectly. Thanks for playing along with us at Uniko this month. Sarah
PS. beautiful piccys of you and Darnell, she's awesome isn't she? x

Gorgeous card Pat! The image is so elegant and I love the background you've blended.
Thanks for joining us at Simon Says Stamp Wednesday Challenge
Mandy xx

This is so pretty Pat! Love the colours of your card ... the rose is gorgeous with your colouring skills. Great mix of stenciling. How fun to see you and Darnell with Hammy. I'm glad he made the trip with her so she was never alone. :) xx

Beautiful card, it is a fabulous image :) Great photographs of you and Darnell, great that Hammy made the trip as well :) Cheers, Shirleyxx

Beautiful card Pat, gorgeous colouring and how lucky to have got the chance to meet up with Darnell. Sounds like she and everyone she met had a fabulous time! Cathy x

This rose is GORGEOUS, Pat! And the blended background with the stenciling makes this even more special! So glad you got to meet Darnell in person and that Hammie found his way.

Gorgeous card. The colours are so beautiful and I love how you've created the background.

What a pleasure it was to meet Hammy as well as Darnell. It looks like you enjoyed meeting them both too. xx

You are right this rose stamp is absolutely beautiful and you made a fabulous card with it! Great colours too! Thank you for joining our August challenge - HOT SUMMER SAYS - on Country View Challenges blog!

Beautiful stamp and stunning ink blending. Thanks so much for joining in on the Uniko Challenge and my apologies for my delay in commenting. Hugs Bev x

Fabulous! Thank you for joining in our Creative Challenge at THe Artistic Stamper .