Hi all.  Well, you might think what a weird title for a post.  I got the idea from Happy Little Stampers where one of the recent challenges was Kiss Stamping, and I thought  I would give it a try and enter.  I unfortunately ran out of time but decided to make a card with the topper I had made and this is the result.   I used a Crafty Individuals stamp called It's Your Birthday which I have had for ages but has never been used on here.

For those who have no idea what the kissing technique is, it entails inking the silhouette stamp in one colour and then inking a second stamp with a pattern on and pressing one down on the other and stamping with either of the stamps to create a two toned image.  I used Adirondack Pink Sherbet on the CI It's Your Birthday stamp, and then Memento Bamboo Leaves ink on the stamp I used to kiss it with, which was another CI stamp called Crackle Background.  The actual sentiment part of the stamp I did make sure was covered with just the green ink so it would be easier to read.  There is another form of kiss stamping whereby you ink the main stamp and then use another stamp without any ink on to kiss with and this just removes the ink and leaves the pattern.  My stamp is a silhouette with rather a busy design which perhaps doesn't work so well but I liked it well enough to use it on the card here. 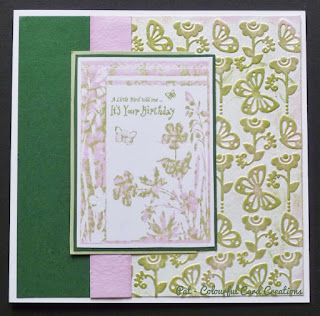 It doesn't actually look as though I used the crackle stamp but I think I probably pressed the stamp down rather too firmly which spread the ink a lot,  but I haven't used this technique much before.  I backed the topper with a snippet of dark green card and then another piece of light green card which was smaller, so only backs the left hand side and goes part of the way across.

I found an embossed snippet which I thought would go and covered the raised areas with the Pink Sherbet ink using blending foam,  but decided it was a bit pale so added some of the Bamboo Leaves over the top which in the end made it look more or less all green.  In the picture it looks more of a gold colour but the snippet was pearlescent white card which I think makes it look different because of the shinier surface.

I assembled it on to a white square base card and didn't need to add a sentiment as it is on the topper.

Pixie's Crafty Workshop - Week 240 where we use up our snippets of paper and card.

I'm glad you decided to use it Pat! It's made a very pretty card! Delicate and genteel! Have a great day! Hazel xx
My Card Attic

Such a soft and gentle stamp Pat - I love it! I never had much success with kiss stamping, you did great!

Great to see you in the Playground.

Very pretty card and detailed explanation of how to make it.

A really pretty card Pat. I've not tried the kissing technique with two colours. Thank you for sharing. Barbxx