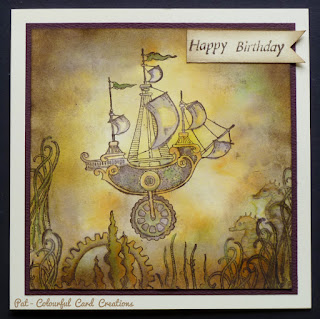 What a clever creation this is Pat! The highlighting of the ship by darkening the edges, is a great touch and using the tentacles as foliage is inspired! LOVE it! Have a wonderful week my friend! Hazel xx
My Card Attic

Oh gosh this is just superb as an under water theme. It's punk so anything is allowed. If ships want to sail under the sea then why not. Love the colours. I must go and investigate these stamps further. Hugs Mrs A.

Brilliant card, Pat. The design is perfect for a masculine card. I'm sure you're going to have lots of fun with these stamps. xx

This is a fabulous card, great use of those stamps. Enjoy your week x


Gorgeous card Pat, the whole design of this is fabulous! I love the images, that ship is awesome and the colours are perfect, great design Pat, LOVE it :-)

I think you used your Artistic License brilliantly for this superb card, Pat!! I enjoyed your thought process and the end result is a winner in my book!! Enjoy your day! Hugs, Darnell

Hi Pat a super card, and perfect for our challenge. Great combination of stamps and colours. Thanks for entering the Chocoloate Baroque Anniversary Challenge, Judith xx

Hi Pat, what a fabulous and very atmospheric card, thank you so much for joining in Chocolate Baroque colour challenge, good luck, Zoe DT member xx

What a gorgeous card Pat and I love the glow arounbf the central image - it really draws the eye!

They are lovely stamps Pat and your card is brilliant. I really like the different colour combination. It will be a great birthday card for a male. Barbxx

I love these colors and your ship under the sea! It makes me think of a children's adventure story and it looks quite magical!

awesome steampunk card ! thank you so much for sharing it with us at The Artistic Stamper
WIshing you good luck to win beautiful stamps !