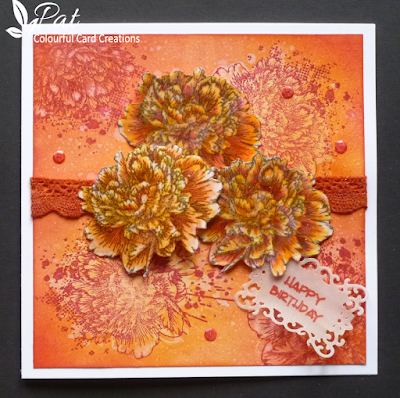 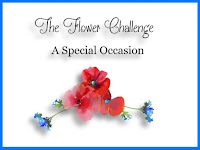 Gorgeous vibrant card, the flowers are beautiful and so is the background to compliment them. Have a great day, Shirleyxx

Your card is beautiful

Congratulations on your win over at Stamping Sensations too - well deserved, it was a beautiful make

Congratulations on your win, and then being chosen as GD (no big surprise, that! You do fantastic work). I'm loving the rich deep fall shades you've done with these gorgeous flowers. The background is awesome, and brilliant idea to take the ghosting (which I can never get to look right) one step further with definition of these lovely flowers. This is just awesome. TFS & hugs

What a week you're having Pat. Congratulations on being Guest Designer at IndigoBlu and also on your win at Stamping Sensations. Your card is absolutely beautiful. The peony is a lovely stamp and the ribbon that you coloured looks really pretty. Barbxx

Congratulations on your DT spot Pat..beautiful card and stunning colours

Stunning work pat...your card is amazing...thanks also for popping over to visit me. Hugs rachel x

A super card pat and the colours are stunning - thanks for the top off about the wrong link to my blog - I've asked Indigoblu to change it for me!
Leanne xx

Congratulations Pat, your card is beautiful, I love the colours.
Janice x

Stunning design Pat my friend! Love those fiery colours! You have done a great job. Hope you are having a lovely weekend and that the following week is a great one for you! Hazel xx
My Card Attic

These flowers are gorgeous, Pat! And your ghosted flowers and an inspiration! Congratulations on your win and Guest Designer spot! So well deserved!

Very pretty! I love the colors you picked and the little tag for your sentiment is very sweet!

Wow, how gorgeous! Love the colros and depth that you have achieved! So glad that you join the fun over Simon Says Stamp Wednesday “Thinking of You” Challenge! Awesome details and design! Super work!

Very pretty, lovely vibrant colours Pat. I also eally like the ghost stamping too. Thank you for joining us at The Flower Challenge, Lisa DT

Such a beautiful vibrant colour Pat and pretty flowers too, a great card! Thank you for sharing with us over at The Flower Challenge.(If you could please add our banner re our guide lines that would be great too.) ;) Viv DT xx

Wow Pat what an amazing card, love love how you have done this and used this flower. I also have this flower stamp but have felt stumped how to use it and you have shown me just how to use to perfection. Thank you so much for supporting us at The Flower Challenge Aileen DT

What a wonderful project! The hint of sparkle is just fantastic. Thank you so much for playing along with us over at the Simon Says Stamp Monday Challenge Blog this week :)

Beautiful design. Thanks for playing long with the Craft Stamper Challenge xx